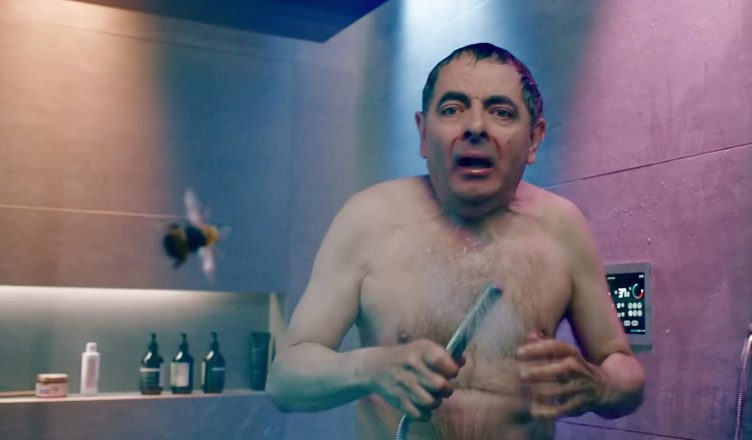 No sting: Funnyman Rowan Atkinson confronts his nemesis in ‘Man vs Bee’.

MAN VS BEE *1/2 (94 minutes; nine episodes) PG
whole series review
It’s always a bad sign when a comedian needs to resort to dog doody for a laugh, yet that’s the level Rowan Atkinson sinks to here in his latest comedy venture Man vs Bee.

And he doesn’t step in it, he face-plants into the stuff. This, from the guy who gave us Mr Bean and Blackadder? That’s not funny. That’s sad.

While there is much well-earned love and respect for the comic stylings Rowan Atkinson has brought to many films and TV shows, claims that he is a modern comedy genius have never really panned out, with Man vs Bee clocking in as one of his weakest efforts.

Donning his pleasant-faced goofball persona, Atkinson plays Trevor, an estranged dad who gets a job house-sitting a large designer home while its owners are on holiday.

With a hand-written guide to help him cope with the home’s high-tech gadgetry, it seems an easy enough gig – but for the bothersome bee that flies into the house, creating mayhem as Trevor tries dispatching it.

Created by Atkinson & William Davies and directed by David Kerr, the premise of Man vs Bee is designed to serve Atkinson’s talents as a sight-gag comedian but it’s rough going. So much so that fans might find themselves in a state of distress.

There are some genuinely funny spots early on, but as Trevor’s situation escalates the lark gets progressively thinner till the show makes that fatal shark jump from silly to stupid.

As obvious as slapstick comedy often is, Man vs Bee is way too obvious, robbing the set-up of any comic tension or ingenuity.

To wit, Trevor walks into the scenario as a bumbling, low-IQ klutz even before the bee (a well-rendered visual effect) has a chance to create any trouble, so the destruction that ensues holds no surprise.

It’s not a case of a man losing control but of an idiot who barely has any to begin with. Had the bee not been there, Trevor probably would have made a mess of the place anyway.

Worse, Trevor never registers that the damage he causes has any real consequence, even though he needs this job so he can reconnect with his daughter, who he speaks to on the phone. He doesn’t seem all that bothered when rare and valuable items are trashed or broken. If he doesn’t care, why should we?

And while it’s easy to see Trevor as a superannuated version of Mr Bean – now in his mid-60s, Atkinson’s comic elasticity is mainly confined to his famously rubbery face – his mindset is more Wile E Coyote, choosing to devise elaborate means of getting the bee rather than simply dousing the damn thing with insecticide.

Career-long fans of Atkinson might take pause to consider how Charlie Chaplin, Jacques Tati, Harold Lloyd or Buster Keaton – four of Atkinson’s comedy heroes – might have handled the premise of Man vs Bee.

As far as the art of visual comedy goes, one imagines they would have built far more tension into the build up and the pay off, with Tati and Keaton making the most of their stone-faced approach to comedy, playing up Trevor as a hapless victim of circumstance rather than as the accident waiting to happen portrayed by Atkinson.

As for Man vs Bee being a “series”, come on. It’s basically an elongated sketch divided into nine “chapters”. The first is about 20 minutes, the rest between 10-12 minutes each. That adds up to a 94-minute running time. Subtract about 2 minutes for the credit roll on each ep and you end up with an actual running time of around 76 minutes. It might have played slightly better as a shorter-than-average feature film.

That said, the show definitely would have played a lot better had the ingenuity, wit and comic timing Rowan Atkinson is rightly famous for been in far more evidence here.

Let’s chalk Man vs Bee up as a hugely disappointing misstep in an otherwise brilliant comedy career.