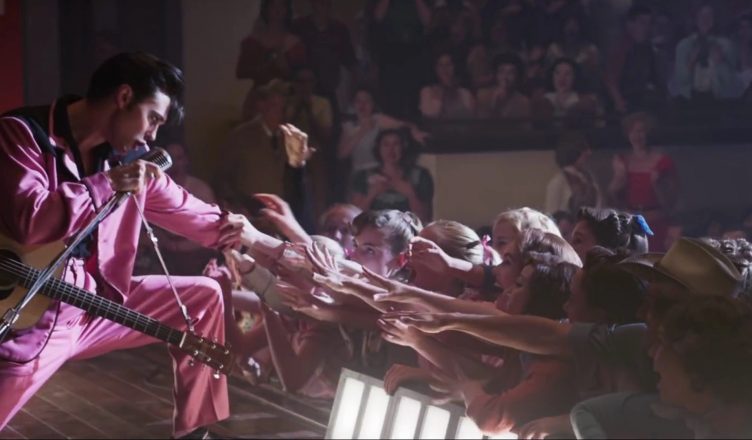 ELVIS **** (159 minutes) M
One of the oft-quoted principles of biopics decrees that you can’t reasonably cram a notable person’s entire life into a couple of hours, that it’s best to capture the essence of the person without the obligation of having to cover every little detail.

Yet following convention has never been part of the splashy style of director Baz Luhrmann. We saw that in such sumptuous, pumped-up, over-the-top offerings as Strictly Ballroom, Romeo + Juliet, Moulin Rouge, Australia and The Great Gatsby.

And he’s at it again in Elvis, a rapturous, rhapsodic tour de force that serves up a dizzying, breathlessly paced biographical portrait of the iconic pop singer, from his carnival show origins to his ballooning global fame.

In typical fashion there are plenty of stretches in Elvis where Luhrmann tries to have his cake and eat it too, simultaneously telling the story of Elvis in a coherent, dramatic manner while blitzing the screen with fact-filled captions and graphics about his career, making the first part of the film look like the world’s most boisterous and extravagant docu-drama.

There are segments in Elvis that do move too quickly as we go in and out of scenes so fast you only get a fleeting impression of what has just happened before being pushed into the next scene.

For instance, in covering Presley’s prolific film career there’s an elaborate and rather beautiful recreation from one of his films, but just as you beginning to register and appreciate all the detail that’s gone into it, it’s over.

There’s a lot of that as Luhrmann punches through Presley’s story with dizzying visuals, hyper-kinetic editing and ever-changing camera angles. It’s a blitz for the eyes and the ears that can sometimes be overwhelming, but it is masterfully crafted, the film’s flash-card aesthetics becoming almost mesmeric.

It takes a little while (about an hour) for the style to settle down a tad and allow the story’s pacing and the very fine central performances to actually breathe, with Austin Butler’s Elvis embodying The King’s artistic passion, sexual energy and deep love of music – a key aspect of any portrait – and Tom Hanks putting in typically great work as his money-loving manager and promoter Colonel Tom Parker, complete with Dutch accent and prosthetically enhanced jowls.

Told mostly from Parker’s point of view, the film does attempt to revise the popular image of him as a ruthless manipulator, though the detailing of his financial shenanigans and true identity don’t do much to burnish his pushy persona.

At the heart of the story, of course, is the relationship between Parker and Elvis and the rising tension that develops as Elvis begins feeling exploited as a product rather than respected as an artist.

Amidst the film’s visual swirl, Luhrmann carefully recreates iconic images from the Elvis canon, giving context to famous concerts and TV specials, including one funny stretch where Parker almost loses his mind over the need for Elvis to sing a Christmas song in order to keep the sponsors happy.

When it came to the roots of his music, Elvis was cast as a polluter of white culture by mainstreaming the black roots of the sounds that surrounded him. It’s a testament to Luhrmann’s consummate skills as a visual storyteller that a film as frenetic as Elvis still manages to impart such a crucial point with such grace and clarity.

As you’re entitled to expect from a film so brash, there are some great musical sequences, and the best one isn’t a killer performance scene, but a killer rehearsal scene.

Having hit Vegas with a lucrative deal promising him great creative scope, we witness Elvis working with his orchestra as they develop his signature sound. It’s golden stuff, a moment that’ll give chills even to the most ardent Elvis detractor.

Of all the career details sprinkled throughout the film, perhaps the most sobering is how Elvis had the chance to star opposite Barbra Streisand in the hit 1976 film A Star is Born, a part that ultimately went to Kris Kristofferson.

The stress put on this happenstance is telling. As the film foreshadows, Elvis wanted to be taken seriously as an actor and to be in better films that the string of cheaply made throwaway mega hits pumped out in the 1960s, usually three per year.

Implicit though it is, the message from Luhrmann is ringing – had Elvis been in A Star is Born what difference could it have made? It’s great food for thought.

All up, Luhrmann and his team have done a splendid job with Elvis, an audacious biopic designed to enthrall non-fans as much as his devotees.

Only those with a morbid interest in how Elvis spent his final hours at Graceland will find any disappointment here, proving that along with all its other virtues, the film also has taste.

FOOTNOTE: Though it’s about an American historical figure, Elvis is a largely Australian film, with Australians all over the creative development, the cast (as Americans, natch), the crew and the funding of this co-production with America.

But, hold it right there, pardner. What’s that? Australians telling an American story? Isn’t that against the rules or something?

Well, no. That’s the old Cultural Cringe talking, something that should have died off 40 years ago.

That such a top film about Elvis – arguably the best, most definitive one yet – has such a rich Australian pedigree is cool. Luhrmann and his team also helmed the best film version of the all-American classic novel The Great Gatsby, which is also very cool.