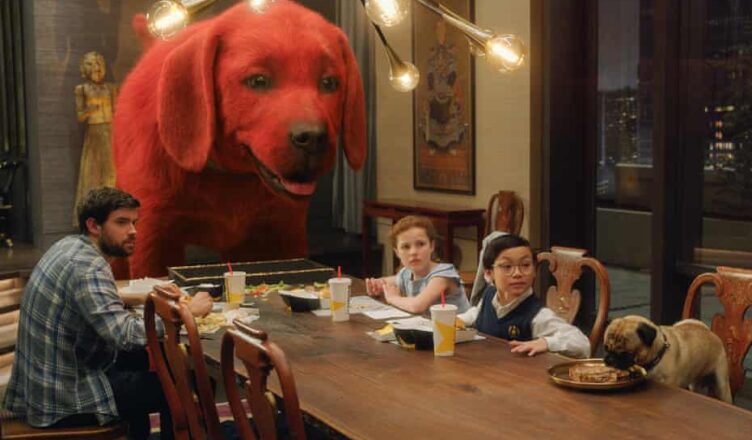 CLIFFORD THE BIG RED DOG *** (96 minutes) PG
It’s long been common for films aimed at kids to have specially built-in treats for their adult guardians. You know, little jokes and references and details that are intended to fly over the heads of children and amuse the adults in the auditorium.

That’s not so much the case with Clifford The Big Red Dog. This is a holiday film mainly and unashamedly created for the enjoyment of young’uns.

Proficiently directed by Walt Becker (Van Wilder; Wild Hogs; Alvin IV; Old Dogs), the enterprise moves quickly and has the usual positive messaging about celebrating difference, being tolerant and the importance of – here it comes, folks – being yourself. Is there a law stipulating this theme as mandatory for any film with children in its target demo?

For the kids there’s plenty of goofball slapstick comedy to chuckle at as little girl Emily (Darby Camp) finds herself in possession of the titular pooch.

When she first encounters Clifford at a rescue tent in the park run by a strange gent called Mr. Bridwell (John Cleese) the red mutt is cute and small enough to fit into her backpack. She’s told the thing will grow according to how much love it receives.

So it’s not long before the dog is the size of a politician’s expense account. It’s still cute as a button and once out on the street and frolicking in the park it becomes an internet hit, catching the attention of everybody, especially futurist businessman Zac Tieran (Tony Hale).

He runs a rather innovative genetics company called Lyfegro. Upon seeing clips of Clifford running about he gets the not unreasonable idea of acquiring the dog for the good of science, even if it means fibbing to the authorities claiming the dog is part of his company’s genetics program.

Child actor Darby Camp does impressive in the lead, careful always to be just cute enough without taking attention away from her digital co-star. As Casey her layabout uncle, British comedian Jack Whitehall carves out a nice arc as a lazy loser who actually finds some purpose through the adventure.

Ultimately, of course, the only performance that truly matters here is that of the giant digital dog – and the critter is a marvel to behold, the latest in a long line of synthetic movie animals that are so jaw-droppingly realistic they’re hard to tell from the real deal. (OK, OK, you can tell Clifford from a real dog because he’s the size of a mammoth. Why do people have to be so picky?)

It’s watching all the hard work and detail that has gone into creating this fabulous beast that will likely be the main thing holding the attention of the adults in the room. The film is certainly another high-water mark showing how much the digital rendering of animals has progressed in leaps and bounds over the past decade or so.

Films such as Alpha, Life of Pi and The Revenant (just to name a few) are taking us ever closer to the Holy Grail of digital effects – the rendering of a humanoid actor good enough to jump over the “uncanny valley”, being that creepy feeling of seeing something that is almost lifelike, but not quite.

The film does have one annoying story hole. Kids won’t care about this, but the film has no real villain. Lyfegro head Zac Tieran is meant to be the baddie, but his only qualification as a movie villain is that he lies to the police about being Clifford’s true. There’s nothing demonic or seedy or underhanded about his work as a genetics entrepreneur.

If anything, he’s quite an altruist in terms of his ambitions so his casting as the Main Nasty of the piece doesn’t quite wash.

Perhaps if he was working on a secret government program to use genetic technology as a weapon or a means of social control the film would have worked better.

For adults, that is. Kids won’t give a toss as they laugh at all the pratfalls and gross-out moments.

Footnote: Ladies and gentlemen, look at that beautiful running time. Knock off eight minutes for closing credits and you’ve got a lovely lean film that doesn’t have that all-too-common feeling that 20 minutes could have been taken out with no harm done.