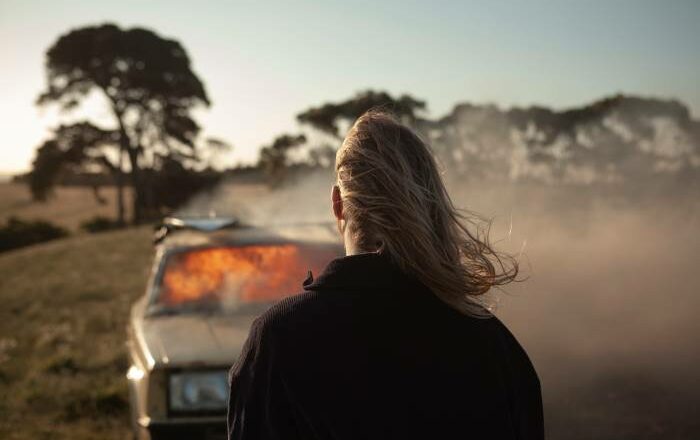 To state the obvious, it was another bumpy year for film with more lockdowns and more cinemas closed because of Covid, forcing us to ingest movies via streaming services, the only film-related business to benefit from the virus crisis.

And it’s not a short-term gain, either. The past two years of hobbled cinema releases has accelerated a change that was already in train, with more and more films being primed for a release into the stream after a limited run at the cinema.

This pattern is now embedded. We saw it with such major films as Red Notice, Being the Ricardos, Nitram, Don’t Look Up and many more.

Other big films with big stars went straight into the stream, such as The Unforgiveable with Sandra Bullock and Finch with Tom Hanks. Both A-listers have already had huge success with straight-to-stream releases; Bullock with Birdbox; Hanks with Finch and his war movie Greyhound, one of many films initially intended for cinemas before Covid hit.

Expect to see more of this as the stream increasingly becomes the place to be for new release movies.

Not that the cinema has lost, or is ever likely to lose, its allure.

Early in 2021, before we were hit by this year’s lockdown, people flocked to the cinemas to see what they could, clearly happy to be free again.

Same again these past few months as we “emerged” from lockdown; major films, long-delayed by Covid, were now available to see in their intended glory, such as Dune and No Time to Die. Both these blockbusters drew massive crowds, with everybody dutifully scanning in and showing their little green vaccination certificates.

So, to state something even more obvious, it seems that whatever fears Covid has instilled in us, it has been superseded by the love for seeing films at the cinema.

And, for the record, the Australian films that did well in 2021 didn’t do so for lack of competing Hollywood product. True, they did get more screens than they otherwise would have because of the Hollywood movie drought, increasing their potential audience.

To be clear, though, any Australian film that earned a sizable audience in 2021 did so because it was good, not merely because there wasn’t a Marvel movie to see instead. A bad Australian film will repel audiences, no matter how many screens it is showing on.

Without the big grosses from big Hollywood films to dominate the whole year as they usually do, Australian films accounted for about 16% of the year’s box office, a big jump from the usual 5% (in a good year). It’s an aberration, sure, but worth noting.

Now, before we scan over the notable releases of 2021 let’s put things in perspective.

Yes, it’s a bummer that cinemas were shut for much of the year, but that grumble occupies the low end of the spectrum. It’s basically a lifestyle inconvenience, however dear you hold the movie-going experience to be.

Let’s never lose sight of how serious Covid is. It takes lives each day; the various restrictions have pushed businesses to the wall, costing jobs and livelihoods. People suffer mental health issues from being locked in; others are anguished by not seeing loved ones at critical times because of travel bans.

The human cost of Covid continues to mount, with so many people kept from attending major events in their lives. Compared to that, waiting a year to see Dune in Imax doesn’t really rate.

Let us also soberly note, at this particular time in our shared story, that we are still in the middle of this global crisis and how the recent flush of blockbuster fare into out cineplexes, while welcome and embraced, might be a false dawn.

Covid cases aren’t just rising, they’re soaring. Locally, case numbers are spiking, sometimes doubling per day, while the situation in the US, UK and Europe is catastrophic. All we need is for one of these markets to start shutting cinemas and it’s Goodnight, Vienna.

Nobody wants to use the word, but another lockdown might be on the cards, possibly before Easter, maybe much sooner. That’s where all signs point.

So, be dismayed, but not surprised, if 2022 – against all hope – turns out to be as big a bummer for movies as it was in 2021, if not bigger. We don’t know where we’re going to be in two months time. If there is a Movie God, please make nonsense of such a dire scenario.

With all that said – whew – let’s take a look at 30 titles – listed in no discernible order – that tell the story of film in 2021, reflecting the highlights, lowlights and sidelights.

The Dry: Director Robert Connelly’s hit Australian crime drama with Eric Bana has to take the award for being the luckiest film of the year. It released in January just as we were coming out of last year’s cinema drought and was able to reap the full benefit as people were finally allowed to flock back into sanitized cinemas. The film ended up taking a cool $20 million and enjoyed a full, unencumbered run before Lockdown #6 hit.

High Ground: And again. Whatever reservations one might have about the film’s storytelling, its success demonstrates how willing people are to engage with Australia’s dark past through film.

Occupation Rainfall: Writer/director Luke Sparke made his $25 million Australian sci-fi epic independently, and in the face of some unjustifiably nasty notices. As an Australian filmmaker the dude is running his own race. An example for all. Somebody give this guy an award for valour.

Moon Rock for Monday & Love You Like That: Any joy roused by the success Australian film had in 2021 must be tempered by the fact that films as bad as these are still being made. Watching them made you feel like we were back in the abysmal 1980s. Never again, please.

Nitram: Justin Kurzel’s quiet, disquieting portrait of Martin Bryant, the Port Arthur mass murderer, was the best film of the year by several furloughs. Note to all budding filmmakers: watch Kurzel’s Snowtown (about bodies-in-a-barrel killer John Bunting; both films written by Shaun Grant) and Nitram in one sitting and that’s all the film school you’ll ever need.

Venom – Let There Be Carnage: Marvel has pumped out some truly forgettable films thus far, but with this superhero blancmange you forgot most of it by the time you reached the exit.

Spider-man: No Way Home: And on the flipside, a film from Marvel (and Sony, of course, who still tenaciously hold the rights to Spidey) that had scenes that were truly memorable. Witnessing the communal reaction from a packed house as the three heroes joined up is the kind of experience you only get in the cinema.

The Suicide Squad: The DC film is remarkable for two reasons: (1) It managed a major cinema release in Australia for about a day before the shutters came down; (2) It takes the award for the ugliest film of the year. Rated R for its violence – one segment sees the team murder a group of rebels – the film features rats, a talking shark, gratuitous bloodshed and a starfish monster with slits resembling lady parts that literally ejaculate offspring. The corpses of innocent people are strewn across the street in the final scene as the squad merrily walk over them. A mess of a film. Harley was lovely, though. Could watch her mow down baddies all day.

Dune: Frank Herbert’s classic sci-fi novel was transformed into a sci-fi epic destined to become a classic. Delayed by Covid for a year it was one of the first films to welcome us back into the cinema. A brilliant big-screen triumph. And it’s only Part One.

Wrath of Man: Hot on the heels of The Gentlemen Guy Ritchie delivered another terrific crime film, this one a far superior remake of the 2004 French film Cash Truck. Great direction; one of Jason Statham’s better turns.

The Ice Road: Face it: Liam Neeson will keep phoning in the same performance in these churned-out action films as long as people are willing to see them.

F9: After two years on the shelf the ninth Fast & Furious film was pretty good and set records for a film released during the pandemic. But get this: the film’s global box office take was $730 million while F8 took $1.2 billion. That’s a big shortfall. Blame the virus.

Judas and the Black Messiah: A top flight cast and a strong, bitter-pill story made this one of the best Civil Rights movies yet.

Music: Sia hit all the wrong notes with this well-intentioned musical film about autism. Critics hit all the wrong notes too, banging on about casting a non-autistic actor as a person with autism. The same-for-same casting argument is BS; it’s never had any credibility. Otherwise there would be howls of protest demanding the negative of Rain Man be immediately torched.

No Time to Die: One of the best Bond films ever, with 007 (Daniel Craig) having something personal at stake. As with Dune, the long Covid-induced holdover – two years in this case – was worth the wait.

The Conjuring – The Devil Made Me Do It: OK. Enough.

Spiral – From the Book of Saw: Chris Rock might well be a huge fan of the Saw franchise but that didn’t make him the best choice to play the lead cop in a Saw movie. As for his attempt to force-inject comedy into the horror? No sale. Indeed, much of it ended up on the cutting room floor. Still love his stand up, though.

Voyagers: Teens in space with but one adult to guide them. What could possibly go wrong? A good idea done very poorly.

Free Guy: An entire film based upon the adventures of a background character in a video game. It’s about time. Thank you, Hollywood.

Godzilla vs Kong: The best mashing of franchise monsters since Alien vs Predator. No, that’s not a joke.

Cruella: Emma Stone totally owned it in Disney’s terrific, beautifully designed backstory to the 101 Dalmatians villainess. Bring on the sequel.

Coming 2 America: They should have left the 1988 Eddie Murphy comedy classic alone. Or at least they should have rewatched it before embarking on this unfunny catastrophe. Did anyone notice the film’s overt sexism, and that it completely negated the whole point of the first film? Why, O Why, Eddie? What’s next? Beverly Hills Cop 4?

The Killing of Two Lovers: A stark, compelling relationship drama set in the middle of Nowhere, USA in the middle of a marriage breakdown. A sterling example of how great little independent films help make up for the lack of creativity and originality we see in way too many of the movies pumped into our multiplexes.

Final Footnote for 2021: We’re all big on commemorations and anniversaries and marking significant movie milestones – so where were all the tributes for Cape Fear?

Martin Scorsese’s white-knuckle thriller was unleashed 30 years ago and was both fabulously frightening and a prime example of how to remake a film properly.

Based on the 1962 black-and-white B-grader starring Robert Mitchum and Gregory Peck (who both cameo in the remake), the film did what all good remakes do – it maintained the essence of the original while rethinking the entire shebang from the ground up.

Updated to a present day setting, Scorsese dialled the fear factor up to 11 as predatory psycho Max Cady (Robert De Niro) built his revenge plans against lawyer Sam Bowden (Nick Nolte) around defiling his daughter Danielle (Juliette Lewis, in a brilliant, Oscar-nominated performance) in front of him and his wife Leigh (Jessica Lange, also superb, though not nominated).

The film holds up powerfully, its tension and ferocity undiminished. As for that kiss between Cady and Danielle – winner of the MTV award for Best Kiss, no less – it still delivers the creeps, and will do so on the 100th anniversary of Cape Fear, 70 years from now.

Note it in your diary. Create a Google Alert, just to be sure you don’t miss it.