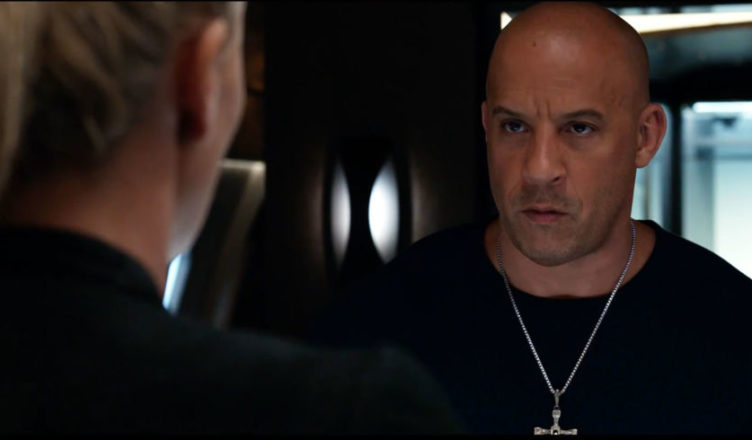 For what it is, Fate of the Furious is a brilliant example of how mass-market films can be done properly.

Respecting both its legacy and its audience, the film honours its eternal promise to out-do the previous film’s action segments – here we get chases through New York and across the Arctic tundra that are so splendidly mounted they qualify as art – and positively out-does itself with a terrific, snap-locked story that actually makes it all work.

In an era of post-content blockbusters where $200 million films often boast narratives that seem to have been scrawled on the back of a Post It note, the one here is so tight and satisfying – every single strand connects to a central idea – it deserves a Special Oscar.

Punching the franchise’s “family” theme, Dom Toretto is set against his crew by a murderous femme fatale (Charlize Theron, making a meal of the role), who recruits him to steal world-threatening technologies. Enemy cop and crook (Dwayne Johnson, Jason Statham) are forced by Government agent (Kurt Russell) to work together with Dom’s crew to track him down before he steals more stuff for his horrible new boss.

And in the middle of all this, Dom’s love Letty (Michelle Rodriguez) is left wondering what has happened to her man’s soul.

A perfect balance of action and story, F8, as it is affectionately known, seems designed to push back against all the bad things said about sequels, franchises and Hollywood’s “cookie cutter” mindset. In a way, the film’s message is “if you’re going to do it, do it like this.”

It was with the fourth Fast & Furious that director Justin Lin and star/producer Vin Diesel saved the flailing franchise from box-set oblivion by committing to original, inventive action sequences and value-driven stories that put characters before cars (if only just). It really proves how, even eight films in, sticking by your principles can pay off.

RAW **** (98 minutes) R
From hot new French director Julia Ducournau comes a new breed of hybrid horror that draws on convention yet doesn’t have a cliche in sight. A new recruit at a vet training hospital undergoes a hazing initiation that leads to a series of startling discoveries about her own culinary tastes. Unpredictable, unnerving, eerily atmospheric and memorable, Raw hopefully heralds a new era of post-cliche horror. A word of advice, though: don’t see it alone. Or after lunch.

Check out our special video interview with Julia Ducournau.

TABLE 19 * (87 minutes) M
This lame “why aren’t I the bride?” wedding comedy stars Anna Kendrick as a quarter-life crisis victim who is stuck at the worst table at her former best friend’s wedding. Limply directed by Jeffrey Blitz (The Office) the film certainly does a fine job replicating the tedium of what it feels like to be stuck at the loser’s table. Kendrick is fine in support or as part of ensemble, a la Pitch Perfect, but she simply does not have the comic chops to hold a film.

GOING IN STYLE *** (96 minutes) M
Fine, sufficiently funny remake of the long-forgotten 1979 comedy starring George Burns about three geriatrics who rob a bank. Here Morgan Freeman, Alan Arkin and Michael Caine form a neat comedy cocktail as they plan to take revenge on evil banks and cruel employers by stealinhg what they think is rightfully theirs. The small sprinkling of social commentary thankfully doesn’t get in the way of the interplay, which often sounds like Grumpy Old Men plus one. The film was directed by Zach Braff from Scrubs and written by Theodore Melfi, who wrote and directed the Oscar-nominated hit Hidden Figures.

COLOSSAL *** (109 minutes) M
Given how many films have been made, especially recently, about alcoholism and given how good they generally are somebody was going to have to think up a different approach to the topic. Thus we have this diverting, cutting low-budget treat from Spanish writer/director Nacho Vigalondo who takes an inventive psychological perspective. Anne Hathaway plays the woman with the booze issue who moves back home after her relationship hits the skids. She hooks up with an old friend (Jason Sudeikis) who runs a bar. While trying hard to get her life in order she slowly becomes aware that a giant beast that has suddenly appeared in Seoul, Cloverfield-like, is actually a projection of her inner demons. It’s a bizarre concept that’s well-handled, blending sci-fi with a touch of message making about the beasts we all carry inside us, and how hard they can be to tame.

DENIAL ***1/2 (110 minutes) M
If there’s anybody left who’s in any doubt about the versatility, range and sheer courage of British acting legend Timothy Spall, his performance in this searing Holocaust drama will set you straight. Based on the real-life court case, Rachel Weisz (herself no slouch when it comes to taking on challenging roles, as Constant Gardner and Whistleblower showed) plays American academic Deborah Lipstadt who was sued by historian David Irving in the late-1990s over his denial of the Holocaust. Irving is one of the most reviled men of the 20th century, yet Spall injects a real humanity into his portrayal, showing him as a loving father and a man of deeply deluded conviction.

THEIR FINEST ***1/2 (117 minutes) M
A glistening Gemma Arterton heads a wondrous ensemble is this rousing, rah-rah old-school crowd-pleaser set in a damaged but defiant London during the darkest year of the war. Arterton goes to work writing scripts for propaganda films in the
Ministry of Information and promptly impresses her colleagues with the female touch she brings to stories of flag-waving glory. There might not be a lot of depth to this fluidly directed slice of nostalgia – Danish director Lone Scherfig doesn’t dwell too long on the realities of war – but it does brim with warmth. The ubiquitous Bill Nighy puts in one of his best performances yet as an ageing actor.

A knockout psychological thriller, Kristen Stewart is a compelling study of twitchy nerves and envy as a personal assistant living in Paris, where she believes she is getting psychic messages from her dead twin brother. Not a lot of effects involved here but some top-notch tension from director Olivier Assayas, who worked with Stewart on Clouds of Sils Maria. A very unusual, very effective ghost story.