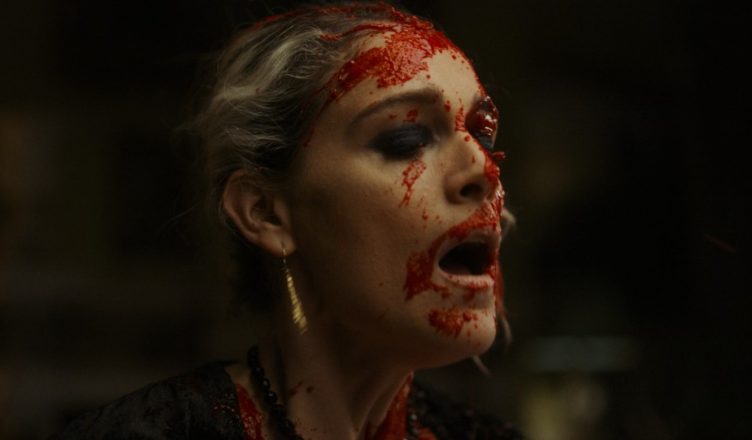 For art’s sake: The quest for artistic integrity gets messy in ‘Flux Gourmet’.

FLUX GOURMET *** (111 minutes) MA
As is often the case with good arthouse films that choose to operate outside the box of mainstream cinema, it’s the journey taken in Flux Gourmet that entices rather than the destination.

It’s not often we get a film from the outer rim that is as fun or as darkly comic or as in love with wordplay and dialogue exchanges. And while we expect a certain degree of transgression regarding taste, Flux Gourmet manages to serve that up without sacrificing wit, which is the usual trade-off.

The weird and wonderful proceedings take place in an ornate art institute, presided over by the generous, open-minded, yet fastidious arts patron Jan Stevens (Gwendoline Christie from Game of Thrones), whose wardrobe consists of garish, yet strangely lovely gowns and hairdos.

In her charge is a group of eccentric audio artists, referred to throughout as “sonic engineers” for the way they elicit sounds from various foods in various states.

There’s the diffident Billy (Asa Butterfield), who has a drooping fringe of hair he can barely see through; the beautiful Lamina (Ariane Labed); and, stealing as many scenes as she can, Elle di Elle (Fatma Mohamed), their driven, demanding leader.

With a temper more heated than the hotplates she uses, Elle is committed to her vision and resents any suggestions from Jan, however reasonably they are put.

One great scene sees Elle and Jan arguing over the rights of sponsors to contribute to the artistic process. The dialogue flows like poetry as the fiery Elle contends with the super-rational Jan. It’s a delight to behold – and one of many.

Stuck in the middle of all this is Stones (Makis Papadimitriou), a lowly, amusingly insecure writer in dire need of income, there to record everything, interviewing the participants about their strange art, following them around, observing.

The poor blighter also has some severe medical issues to do with methane emissions and other more pressing matters that keep him close to the nearest lavatory. He relays his experiences via a sombre narration, that is as funny as it is dour.

AFTER EVER HAPPY * (95 minutes) M
Ask any sensible young woman how they’d deal with an obsessive, hot-headed ex-boyfriend with a drinking problem who likes setting fire to houses and needs to be told to stop following them around and chances are the hypothetical sensible young lady would cut him off and strive to put as much distance between herself and any such ex-beau as humanly and legally possible.

Tessa (Josephine Langford) is not such a person, so when ex-bf Hardin (Hero Fiennes Tiffin) begins behaving like a nutbar she doesn’t heed any red flags and keeps the possibility of them resuming their romance alive. Just goes to show love makes you do crazy things.

That’s a pretty big pill to swallow and if you’re not already an all-forgiving devotee of these films it won’t go down. It’s hard to sympathize with either of these characters, the film is emotionally overcooked, full of cuss words and has some pretty dodgy dialogue that the spirited young cast do their best to sell. All credit to them. Still, it’s hard to sit through without wishing you could scroll through Google News.

Still, to be fair, it’s got its fans. After Ever Happy is the fourth film in the After series of super-sudsy teen soap operas, all based on the books by Anna Todd with the concluding chapter After Everything coming soon.

Will Hardin and Tessa overcome the hard realities of modern romance and finally get together? Two words for that.

For normal people the best advice is to save on the price of a cinema ticket and wait for the whole series to drop on Netflix, then sample it for taste.

For fans, no advice can save them. As has long been the case with soapy romantic drama, once you’re hooked no amount of reason can dissuade you.