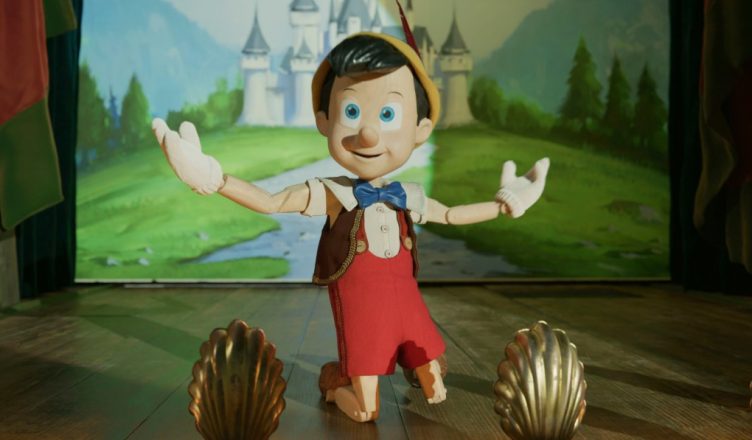 Wooden appeal: A classic animated tale gets an expensive, live-action retelling in ‘Pinocchio’.

PINOCCHIO ** (111 minutes) PG
As with far too many live-action remakes of Disney animated classics, the ultimate, unintended achievement of the brand spanking new version of Pinocchio is to merely remind us how truly great the original was.

As with Aladdin, Dumbo, The Jungle Book, Pete’s Dragon, The Lion King and Mulan (urgh, Mulan) the makeover of Pinocchio served up here features top-class digital animation but simply lacks the spark, novelty, pace and magic of the original.

It’s also too long, clocking in at a hefty 111 minutes while the original was all done and dusted with Carlo Collodi’s 1881 fantasy fable in a lean 84.

Far more important is that while Walt Disney and his team broke new ground with their daring cinematic animation, the new version does no such thing. For all the expensive wizz-bangery, visually it’s same same.

Though technically proficient, as usual, director Robert Zemeckis (Back to the Future; Roger Rabbit; Polar Express; Cast Away) does a strictly pedestrian, plodding job of retelling the story of Italian craftsman and toymaker Geppetto (a richly accented Tom Hanks) being granted his wish that the wooden puppet he has made in the likeness of his deceased son be brought to life.

Regrettably, that’s the only thing that does so here.

The film is one of those cases where all the ingredients are present, yet the soufflé fails to rise.

Add to that the sobering fact that there’s no count where the new version outdoes or outshines anything in a film that is more than 80 years old. It adds weight to the suspicion that before deciding to remake a classic, studios aren’t asking one very important, very uncomfortable question – Why Are We Doing This?

And just to rub in a little more salt, there’s already been a quietly brilliant remake of the Pinocchio story. It’s a Steven Spielberg movie called A.I (2001).

Zemeckis, who co-wrote this with Chris Weitz (Antz; About a Boy; Cinderella), crowbars in some weak pop references and makes a big deal about the seductive and destructive allure of fame, with Jiminy Cricket there trying to guide him.

As a time killer on TV the new Pinocchio might pass muster with undemanding viewers. Still, ordering up the brilliant original might be a better way to spend time, and less of it.
Disney +

ME TIME **1/2 (103 minutes) M
Doing his usual one-note schtick as a hapless shmoe caught up in circumstances beyond his control, Kevin Hart plays Sonny, an emasculated-yet-dedicated house husband who becomes worried that his successful architect wife Maya (Regina Hall) is in the process of being seduced by wealthy client Armando (Luis Gerardo Méndez).

Hoping to relieve some stress he attends the raucous birthday celebration of his old pal Huck (Mark Wahlberg). Of course, things go awry and Sonny ends up in a mild caper jaunt involving bad debts, revenge and turtles.

With way too much excrement-based humour, there’s just enough comic sizzle between Hart and Wahlberg, who does a good job playing an over-confident, positive-thinking businessman who is in over his head.

Though Hart’s performance is interchangeable with those in most of his other comedy epics, director John Hamburg keeps things moving at a snappy pace, ultimately clocking the film in as a celebration of suburbia.

To give him his due, Hamburg is a notable film comedy talent who wrote the Meet the Parents films (that first one stands as a modern classic), Zoolander, Along Came Polly and I Love You, Man, directing the last two.
Netflix

I CAME BY *** (110 minutes) MA
A nose-thumbing, anti-establishment graffiti artist messes with the wrong bull when he attempts messing up the lovely digs of retired judge Sir Hector Blake (Hugh Bonneville; Downton Abbey), only to discover some back-room business Sir Hector would rather keep from public scrutiny.

Look hard enough and you’ll find some unforced themes about wealth, class and white privilege but the very taut direction by writer Babak Anvari keeps focus on the rising tension, resulting in a nifty, rather violent little UK thriller that is not designed for the faint-hearted.

Antonio Aakeel is fab as the worried friend; Kelly Macdonald is terrific as the even-more-worried mum; but Bonneville owns the show as the nothing-worries-me gent who likes keeping one step ahead of his pursuers.
Netflix

DAY SHIFT *** (113 minutes) R
Donning his comedy hat, Jamie Foxx enthusiastically joins that long list of movie vampire hunters in Day Shift, an ultra-violent, limb-tearing, blood-spurting B-grade action comedy that deploys some top-notch production values in the service of what is essentially an exploitation movie with an A-list star and a nice big fat budget.

The cheesy set-up has Foxx playing Bud Jablonski, an LA-based vampire hunter pretending to be a pool cleaner. The vampire hunter union keeps him from working nights, thus making extra-difficult his attempts to raise the money he needs to keep his beloved daughter Paige (Zion Broadnax) and estranged wife Jocelyn (Meagan Good) from moving to Florida.

But raise the bread he must so on the hunt he goes. Forced to team up with weedy union rep Seth (James Franco) and drawing on the help of his buddy Big John (Snoop Dogg) and several friends-in-need, Bud tears through the local vampire community collecting valuable fangs and raising the ire of super-vamp villainess Heather (Australian actress Natasha Liu Bordizzo).

Day Shift is the first film from long-time stuntman and second unit director J. J. Perry, which no doubt accounts for why the plentiful action served up here is so fabulous.

The many hand-to-hand combat scenes are choreographed like violent ballets and superbly edited, with Bud’s raid on a home literally infested with vampires a particular highlight as he and his crew contend with multiple nasties who can only be stopped by a very precise decapitation.

There is a strange beauty to these scenes of close-quarters battle and dismemberment, the apparent chaos we see being the result of a lot of intricate live-action stunt work complemented by some stellar visual effects.

Also beautiful to the eyes of any action movie fan is the film’s centrepiece vehicle chase, which is fabulously mounted and features some truly marvellous editing and photography, the eye-popping drone work being even better than what we saw in Michael Bay’s Ambulance.

As Ned’s nerdish, gun-hating, wholly reluctant assistant Franco owns a lot of the film over Foxx, proving both physically funny and when spouting reams of vampire union regulations or protesting how much he hates all this violence. Snoop is cool as the gun-loving best pal.

We’ve had vampires coming out our ears over the past few years – actually, the past few decades – so it’s sweet that what could otherwise have been a forgettable slice of stream fodder Day Shift shapes up as a fun and meaty movie meal.
Netflix