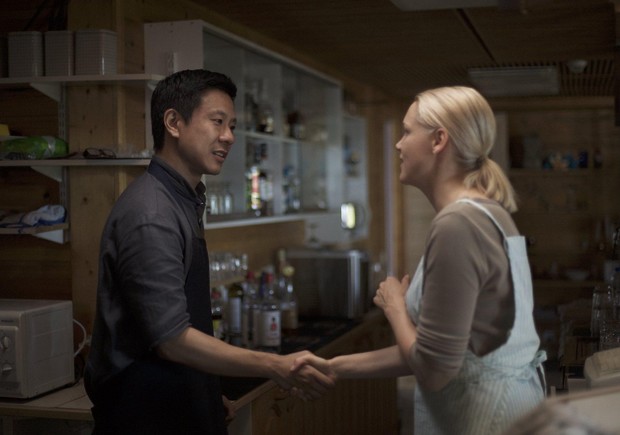 Not just friends: A Chinese chef and a Finnish diner manager make a life-changing deal in ‘Master Cheng’.

MASTER CHENG *** (113 minutes; subtitled) PG
No sensible person would argue with how great Chinese food is. Just how brilliant it is forms one of the warm themes of Mika Kaurismaki’s thoroughly congenial cross-cultural comedy-drama about a Chinese cook in Finland.

Cheng (Pak Hon Chu) is on a mission to find the kind Finnish gent who saved his restaurant from closing. He wants to repay him with money and thank him with a meal. He narrows his search down to a tiny, remote Finnish village.

With his bored son (Lucas Hsuan) in tow, Cheng asks the locals in a diner, but to no avail. The manager Sirkka (Anna-Maija Tuokko) can’t help him either, but rather than send them on their way she offers some free accommodation for the night.

As luck would have it a busload of hungry Chinese tourists show up but they’re unimpressed by the slop the diner has on offer. So Cheng offers to cook them all a hearty Chinese meal.

The gesture is so overwhelming Sirkka offers them cost-free accommodation for as long as they like so long as Cheng can teach her how to cook Asian and help her rustle up a Chinese menu for the diner. This he agrees to. Business booms as the tourist trade starts rolling in.

But where is her man?, he asks. Where is his wife?, she asks. Why won’t Cheng let his boy ride a bike? And why doesn’t Sirkka have kids?

Their mutual curiosity develops into genuine attraction. Meantime, the locals fall in love with Cheng and his food. It’s delicious but it also contains medicinal and life-prolonging properties. Illnesses disappear, ailments improve thanks to Cheng’s grub.

A Chinese-Finnish co-production, the film is intended to make nonsense of the fish-out-of-water cliche by illustrating how a warm, welcoming community of lovable national stereotypes and great cuisine can make anyone welcome anywhere.

The film has a nice, gentle flow to it, though Kaurismaki clearly isn’t in any great hurry to get through the story, even when it becomes fairly obvious how things between Sirkka and Cheng are likely to pan out.

There’s beautiful scenery and some funny bonding scenes between Cheng and the lovable locals, though be duly warned that the film contains footage of very old, out-of-shape men with their tops off.

Easy to watch and easy to like, Master Cheng isn’t just about comfort food, it is comfort food, an inoffensive, scenically sumptuous, heart-warming food-based film with its heart and its menu in the right place.

Master Cheng is in cinemas now