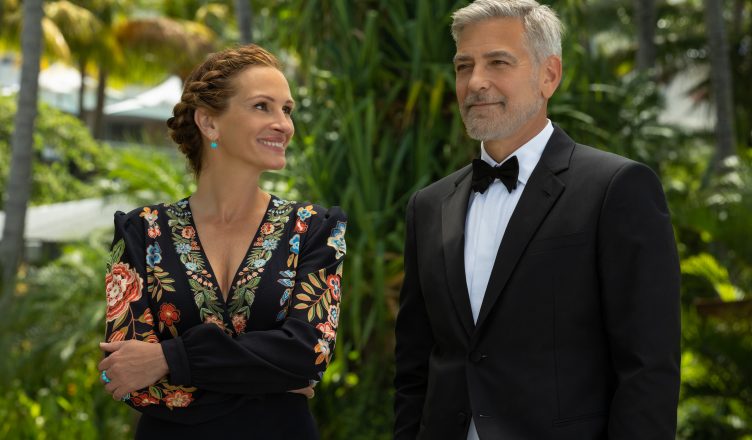 TICKET TO PARADISE *** (104 minutes) M
The sight of George Clooney and Julia Roberts bopping to Jump Around by
House of Pain might not be reason enough on its own to submit yourself to the formulaic pleasantries of Ticket to Ride, but it is a notable highlight in an enjoyable, featherweight round of romantic comedy fluff, a made-to-order crowd-pleaser that could have done with more laughs, but which is funny enough to keep you smiling.

Clooney and Roberts – smartly buttering their own bread by also serving as producers – play David and Georgia, a joyfully divorced couple who snipe at each other with such consistency and venom you’d swear they were still in love.

Stunned by the news that their only child Lily (Kaitlyn Dever) is planning to give up her career in law to impulse-marry a seaweed farmer and move to Bali they agree to a devious scheme.

While in Bali to attend the soiree they agree to play nice while they figure out a way to save their daughter by derailing her wedding with Gede (Maxime Bouttier).

Those with long memories will recall how Roberts traversed vaguely similar territory in 1997’s My Best Friend’s Wedding.

Indeed, Ticket to Paradise has the look and feel of the type of rom-com Roberts ruled in back in the 1990s – only here she’s playing the mother instead of the daughter. (And rule the rom-com realm she did, from 1990’s Pretty Woman to, let’s say, Mother’s Day in 2016.)

Of course, the cute ruse at the core of Ticket to Paradise results in many comic situations that, of course, sees the pair getting through their confected hostility and, of course, revisiting the prospect of restoking a romance that was wonderful enough to produce a child and a valuable real estate holding.

While they don’t exactly set the screen on fire, the chemistry between Roberts and Clooney is enough to keep the film afloat and to help you forgive a major story quibble.

As progressive as Hollywood likes to think it is, there’s some surprise and a little disappointment in how the issue of a young woman sacrificing her future for the sake of a bloke she just met is so blithely brushed aside.

It’s the weakest part of the story. If the parents were so concerned about Lily throwing her life away they should have argued their case stronger and she should have come back with something better than “I just wanna be myself”.

Fully developed, the theme would surely have provided ample opportunites for comedy and drama, as well as making the film feel a little more of the day.

But does that matter? Well, perhaps it should, but it definitely doesn’t.

Be of clear mind: Ticket to Paradise is pure, fully filtered, by-the-book multiplex fodder built around the drawing power of its marquee stars, each of whom have a likeability rating high enough to overwhelm any flubs or lapses in plausibility.

The important thing is that love wins out, that we get some pretty shots of the sunset and that our stars are centre-frame at least 90% of the running time, which they are – including the credit crawl, so don’t dash out too quickly.