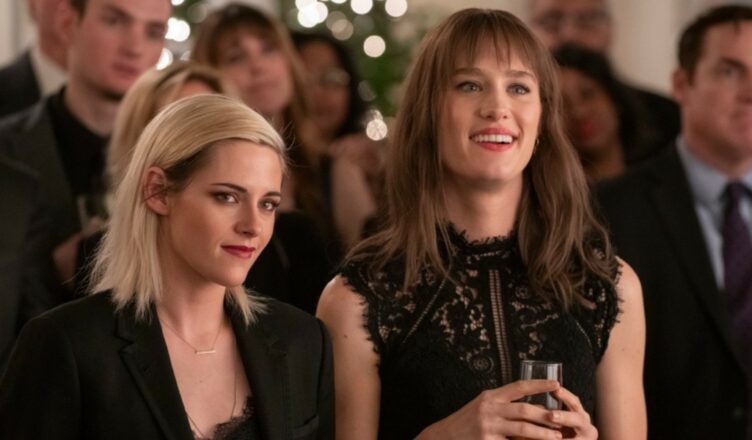 HAPPIEST SEASON *1/2 (102 minutes) M
One of the more testing experiences the modern film lover can endure is the sight of Kristen Stewart attempting to do comedy. It’s not that she can’t do comedy it’s just that, on the evidence thus far, she’s a very fine dramatic player but bringing the funny isn’t really in her bones, as Charlie’s Angels painfully proved.

Her performance is the weakest link in the girl-girl romantic comedy Happiest Season, though it’s not the only one – not by a long shot.

The film’s premise somehow posits that in the year 2020 two well-educated, intelligent open-mined and loveable parents with two other daughters would have trouble accepting that their adult daughter has a preference for girls over boys, as though it’s a satanic taboo.

Yet that’s precisely what we are expected to believe as Harper (Mackenzie Davis) drives her girlfriend Abby (Stewart) to her parents’ home for a Christmas holiday.

Harper has kept their relationship a big secret from her parents and she wants to keep it that way during Abby’s visit.

The trouble with this story point is that it just doesn’t fly. Once we arrive all seems perfectly warm and welcoming. There’s nothing to suggest either her father Ted or mother Tipper (played respectively by Victor Garber and Mary Steenburgen) would have any issues with their daughter being gay.

The hook is supposed to be that Ted is a small-time local politician running for mayor, the suggestion being that Harper’s orientation would somehow hurt his campaign.

Again, no sale. It’s not as though Ted has voiced any strident opposition to gays or has any LGBT issues. If anything, having a gay daughter would surely help his campaign, especially if he’s conservative.

But, no, Abby must remain in the closet (literally at one point) and pretend to be Harper’s non-sexual roommate buddy, all the while watching Harper’s parents try to push her back into a relationship with former boyfriend Connor (Jake McDorman from the Limitless TV series), presumably to create the image of a regular all-American family, even though every sitcom from The Brady Bunch to Modern Family shows that no such template exists.

The idea might have sold in the 1970s, maybe – but in 2020? Who bats an eyelid? The whole idea feels so dated it creaks. And the premise itself is so bland and unadventurous. For instance, why not have Harper introduce her girlfriend to overtly hip, liberal parents, who then strenuously object?

Now here’s somebody whose comedy credentials are beyond discussion, with loads of live work, movies and TV under her belt, including all those seasons of Parks and Recreation.

She clearly would have done a much better job playing Abby than Stewart, an accomplished dramatic actress – Seberg; Personal Shopper; Clouds of Sils Maria; and, yes, the Twilight films, which she carried – but who simply looks uncomfortable when trying to be funny.

Plaza aside, the film is strewn with wasted talent, though veteran Mary Steenburgen (Back to the Future; Curb Your EnthusiasmIt’s a Wonderful Life.

It’s telling, and a tad ironic, that Frank Capra’s 81-year old film, starring James Stewart and Donna Reed, has more heart and daring than anything on offer in Happiest Season, try though it does.