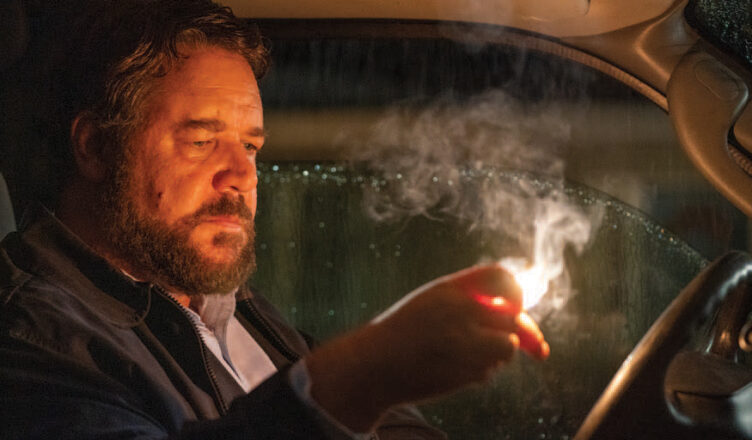 Lethal match: Russell Crowe stars as a psycho driver in the thriller ‘Unhinged’.

UNHINGED *** (90 minutes) MA
It’s a big, bad ol’ Russ we get in Unhinged, a tightly-packed, ultra-violent psycho thriller that sees Russell Crowe play a villain who relentlessly torments a woman after a minor road rage encounter.

The day starts badly enough for single mother Rachel (Caren Pistorius), who has to fight heavy traffic to get her son Kyle (Gabriel Bateman) to school. As the infuriating gridlock drains her patience she angrily honks at a car that won’t move at a green light.

As happenstance would have it, the driver is a corpulent, down-on-his-luck sod called Tom Cooper (Crowe) who is having a very bad day. Precisely how bad is made clear in the film’s startling opening, the violence of which sets the scarlet tone for the rest of the picture.

He catches up with her, apologizes through the side window and asks her to reciprocate, which she doesn’t. That sets him off on a blood-soaked stalking frenzy that escalates once he gets access to her phone.

Unhinged is like a slasher movie on wheels as Cooper wreaks havoc on Rachel’s life, both on the road and on the phone.

Though the film’s chief concern is in delivering a truckload of B-grade thrills and tropes during a prolonged cat-and-mouse chase, it offers a neat sidebar commentary on the huge amount of information we keep on our phones, and what can happen should that data fall into evil hands.

The film ain’t for the squeamish. Director Derrick Borte (The Joneses) stages some pretty gruesome killings, with one particularly horrible moment qualifying as one of the most gratuitous scenes of violence we’ve seen in a while. It’s graphic to the point of being pornographic and serves as an example of how a touch of style could have covered the moment with more impact and less blood.

Most of the film happens on the road as Cooper pursues Rachel and Borte mounts some impressive vehicular mayhem that appear to have been performed practically with real cars. There are tiny doses of digital assist, but they’re almost invisible.

Pistorius puts in a fine, convincing turn as the frantic quarry while the stern-faced Crowe does an exemplary job chewing the scenery before destroying much of it. There are even a few moments in the midst of all the bloodshed where he gives us a little backstory to how life has treated Cooper. It’s no excuse, of course, but it does add some colour to the portrait.

Tightly directed, Unhinged is a full-on ride that offers little relief or humour, which must have been especially frustrating for Crowe, an inveterate jokester. His humour wasn’t wasted, though, and was used in some very funny online ads. (See links below.)

In keeping with tradition, nonetheless, the film offers a truly cathartic climax with an almost poetic send off.

Footnote: The film has a listed running time of 90 minutes but that includes end credits that run for about 10 minutes.


And here are some official promos for the film, also funny.