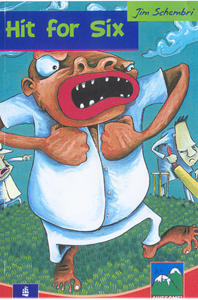 HIT FOR SIX (Pearson, 2003)
When Ian turns up on the first day of fourth term the lads on the school cricket team think he is a large, lumbering joke. So when he shows up for the team tryouts nobody takes him seriously. But Ian shows them all what a great batsman he is. He makes the team, then starts making changes – big changes. Is this the kind of person they really want on their side? And do they really have any choice?