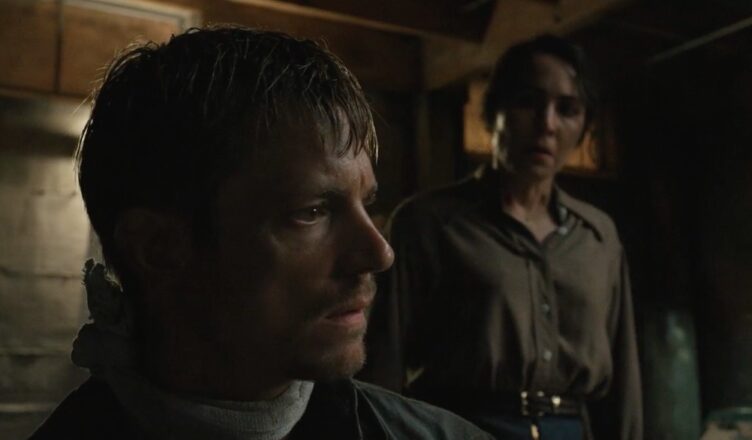 Horror revisited: A woman kidnaps a man she suspects of Nazi war crimes in ‘The Secrets We Keep’.

THE SECRETS WE KEEP *** (98 minutes) MA
No attempt to escape the past ever goes well in the movies. Past events always find a way of revisiting their subjects, whether victim or criminal, usually through happenstance. It’s always been a great story premise.

Probably the best example in the past few decades was in the unheralded 1998 Bryan Singer film Apt Pupil, an adaptation of the 1982 Stephen King novella, in which an ageing Nazi hiding in American suburbia (played brilliantly by Ian McKellen), is discovered and tormented by a high school kid (the late Brad Renfro).

The scenario of The Secrets We Keep bears some similarity, and while it isn’t delivered with quite the same intensity it’s in the same ballpark and touches a lot of the high-voltage themes aired in Apt Pupil regarding accountability and retribution.

A rather loose remake of the 1994 Roman Polanski film Death and the Maiden (based on Ariel Dorfman’s 1990 play) the film is set in the glow of post-war American suburbia in the late 1950s.

Sitting happily in the park with her son is Maja (Noomi Rapace, the Dragon Tattoo girl, who also produced this), a Romanian who married Lewis (Chris Messina), an army doctor who now runs a local practice which Maja helps manage.

She’s happy enough with her new life in her new country but, as luck would have it, she sees a figure from afar who she swears is a Nazi soldier who was involved in terrorizing and murdering her family and friends.

In an act of vigilante justice Charles Bronson would have been proud of, and with a comparable degree of violence, Maja coshes the large man, Thomas (Joel Kinnaman), while he’s walking home from his job at the refinery and tosses him unconscious into the large trunk of her car.

Tied up and gagged in the basement of her lovely home she plans to interrogate, torture and berate him until he confesses his crimes to her.

Needless to say, her husband is none-too-keen on his wife’s new hobby, particularly when her accusations don’t match her prisoner’s wartime story. More disturbing still is how any suggestion that she just might possibly have the wrong person don’t much diminish her determination to extract a confession by any means necessary.

The film’s pretty period recreation – love those vintage TV sets with their small oblong screens – serves as a neat counterpoint to the increasingly dark themes about accusation and personal justice.

Of course, Maja could have simply reported the guy to the authorities, though the move that would most likely have received a sluggish response. America didn’t get serious about the Nazis hiding in their midst, often with official government support, until a proper, long overdue crackdown began in 1979.

It also would have been too dull, for doing so would have robbed her of the chance to mete out her own version of score settling to the man she believes committed the heinous war crimes that have scarred her.

When it comes to showing the more violent aspects of Maja’s experience director Yuval Adler (who co-wrote the film with Ryan Covington) doesn’t flinch, though he should have taken more care with Maja’s young son, who seems remarkably oblivious to the obvious signs that something untoward is going on downstairs.

So, too, the local cop who dismisses some pretty suspicious noises way too airily.

Those crinkles aside, The Secrets We Keep delivers a strong, Holocaust-themed hostage drama that is careful not to shy away from the underlying truth that peace is a state of mind almost unrecoverable once it has been violated.

The Secrets We Keep is not screening in Victoria, of course, but is getting a cinema run across the rest of the nation through the marvellous Palace chain. The film will be available to everyone – including Victorians – at the Foxtel Store from 21 October.