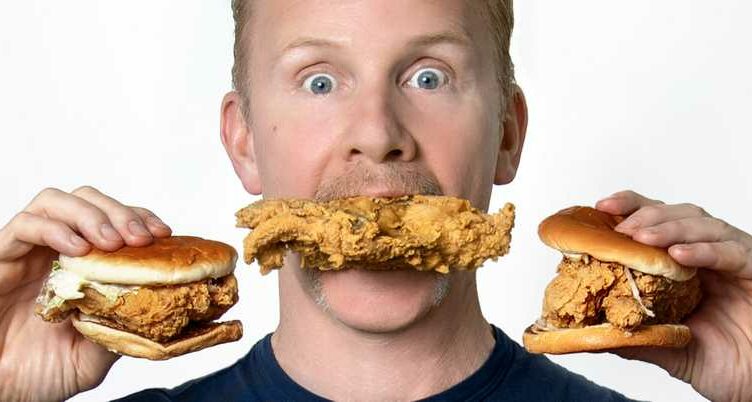 Bite size: Morgan Spurlock bites off exactly as much as he can chew in ‘Holy Chicken!’.

SUPERSIZE ME 2: HOLY CHICKEN! *** (103 minutes) M
As a sequel to his 2004 megahit doco about the ills of the American fast food industry, funnyman/troublemaker/masterful self-promoter Morgan Spurlock hits dead centre with his wittily conceived update about the clever marketing behind junk food.

Made in 2017 and released theatrically and online late last year, Holy Chicken is actually more satisfying that Supersize Me, standing as a better, more effective example of agenda-driven activist film-making.

Revisiting Supersize Me now almost makes you cringe at how obviously biased Spurlock was at the outset. Demonstrating the health risks of junk food by only eating junk food was bound to produce the results he wanted. As we often see with Michael Moore’s work, it was certainly entertaining yet only provided a cinematic version of confirmation bias.

In Holy Chicken Spurlock, though full of his signature smarm and bluster, takes a more balanced and measured approach in his crusade to illuminate the spin behind the cleverly honed health-speak that surrounds fast food today.

The best way to accomplish this, he decides, is to jump in head-first, gonzo-style, and actually start up his own fast food restaurant from scratch.

With chicken being the hottest item on the “healthy” fast food menu he adopts a farm-to-table concept – raising chickens himself, growing them till they’re nice and plump, then turning them into chicken sandwiches and serving them up in his restaurant in Columbus, Ohio (the test marketing capital of the world, apparently.)

His creed is 100% honestly, so Spurlock covers his carefully coloured walls, place-mats and drinking cups with fast facts about how smart product labelling has created the powerful impression that fast food is much healthier than it once was.

His research journey is often alarming. He finds out how easily a farm can be officially recognized as “free range”, how so much of food branding is good old doublespeak and that raising chickens quickly to enormous sizes results in some dying of heart attacks and trying to walk with legs that can’t take the weight.

Politically, Spurlock gets into the workings of the “big chicken” companies that supply chicks to most farmers and how they can ruin non-compliant farmers by providing sub-standard birds.

Spurlock seems aware that his antics won’t change much. His purpose here is simply to inform people, knowing full well the irony at the heart of his enterprise. Still, it’s terrific viewing, often funny, sometimes scary.

The film has become something of a redemptive project for Spurlock.

A recovering alcoholic and manic depressive, his pre-emptive public confession in December 2017 outlined his sexual misdemeanours and misconduct, coming shortly after the #metoo movement bloomed on the back of the Harvey Weinstein case. He saw what was going on and wanted to fess up before being found out.

Consequently he and the film, which had been enjoying success on the international festival circuit, suffered.

Spurlock lost a lucrative $US3.5 million distribution deal with YouTube Red and lost his production company, putting many people out of work and delaying the release of Holy Chicken until late last year.

In his recent press campaign, Spurlock duly applied his creed of honesty to himself, being upfront about his sexual misconduct and history (including an allegation of rape from his college years), his alcoholism and his hope that Holy Chicken would signal the emergence of a better version of himself.