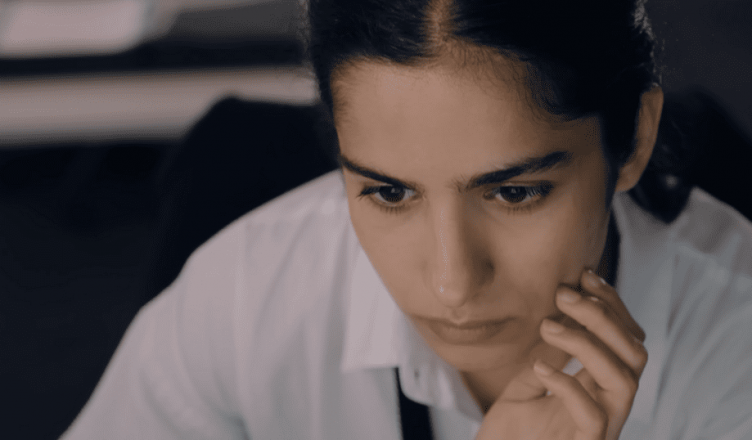 THE UNDECLARED WAR **** (297 minutes; six episodes) MA
full series review
In a highly polished, engrossing vision of an all-too-recognizable near-future scenario, The Undeclared War takes fake news, deep-fakes, high-end cyber hacking, online propaganda, the hijacking of social media, newsroom corruption and other assorted hot-button threats to democracy, dials them all up to 11 and incorporates them in a splendidly disposed cautionary drama about the fragility of the systems that hold society together.

As Britain heads towards a general election a major security breach in the GCHQ (Government Communications Headquarters) is detected by Saara (Hannah Khalique-Brown), a lowly, unpaid work experience student who spends much of her time reading thousands of lines of code.

Widespread applause for her diligence is soon doused in meetings with the prime minister and his team, one of whom rightly questions the competence of GCHQ leader Danny Patrick (Simon Pegg, acquitting himself very well in a dramatic turn). After all, if the issue managed to evade the organization’s experts, what else has been missed?

From here a complex, though never confusing, web of very clever deceit and information manipulation is traced back to reveal some unsurprising, highly motivated culprits, extremely skilled in the art of staying several steps ahead of their targets as the British intelligence service comes under increasing attack for not having its head in the game.

Apart from a slightly clunky start, The Undeclared War presents a sharp, disturbing tale of international intrigue and covert operations, playing upon the ripped-from-the-headline issues of electoral tampering and the ever-shifting sands of cyber security.

In the clearly laid-out scenario here, the hydra-headed attacks on data that is meant to exist behind several layers of fortification reveal how vulnerable trusted systems are, and how the consequences of successful penetration could prove far more damaging that conventional warfare. It’s frightening stuff, effectively delivered.

And it’s not without style. The intricate plotting is enticing and water-tight, performances are solid throughout – with veteran Mark Rylance chiming in with yet another terrific turn as an old-school techy – and Saara’s ventures into the matrix are smartly visualized in surreal set-ups as she wanders through imaginary buildings and rooms like a curious carpenter.

There’s also a salient social message at the heart of The Undeclared War. At first nothing much is made of Saara’s ethnicity, but as the stakes slowly rise and the manipulation of public fear comes into play we witness how effectively prejudice can be repurposed for political gain.

It’s a sterling series, primed for those who like topicality and strong doses of dramatic substance to their cyber thrillers.

Footnote: When the show was released in Britain it was accompanied by a TV ad showing an address to the nation by the show’s fictitious prime minister (played by Adrian Lester) and GCHQ chief (Simon Pegg. It upset many people who – would you believe? – thought it was real. Check it out. It doesn’t say much for the average Brit’s ability to recognize their own PM or, indeed, Simon Pegg who – after Shaun of the Dead, Hot Fuzz, three Star Treks, four Mission Impossibles and more than two decades doing first-class TV comedy – you’d have thought was famous enough by now. sigh