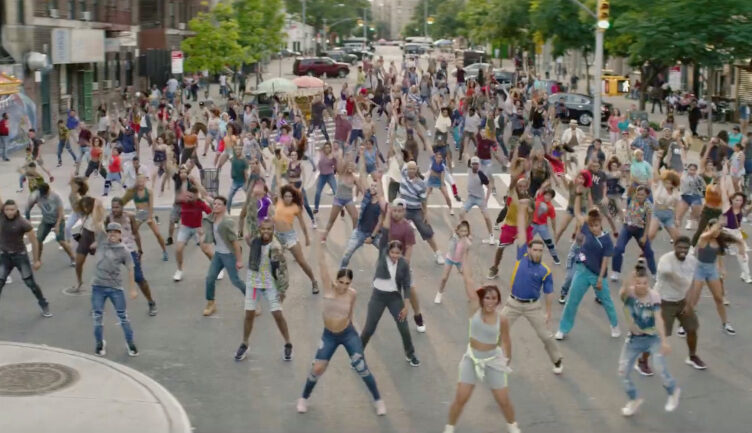 Street gang: Celebrating neighbourhood togetherness in ‘In the Heights’.

IN THE HEIGHTS ***1/2 (143 minutes) PG
One of the many clichés spawned by the Covid era is how any big motion picture that manages to secure a wide release is fated to offer us a much-needed return to the splendour of the type of cinema we have been forced to live without for so long.

Sounds sappy – or it would be if it weren’t so perfectly true, with the long-delayed advent of In the Heights, a vivacious, energetic, uplifting musical very much in the tradition of old-school song-and-dance film adaptations of musical theatre hits. A word of advice, though: don’t think too deeply about it.

Set in the largely Latino Washington Heights district of New York during a heatwave we meet Usnavi (Anthony Ramos), a young entrepreneur keen to move his life beyond the corner store he runs and to the beachfront cafe left to him by his father. The place is a wreck but he plans to rebuild it, along with his life.

He wants to take cousin Sonny (Gregory Diaz IV) with him, though his big dream is to include Vanessa (Melissa Barrera). He’s crazy for her, an especially frustrating feeling given how she’s friend-zoned him.

Vanessa has just returned to the area having dropped out of college over a slight at a dinner party. Similarly, another neighbourhood girl Nina (Leslie Grace) has also dropped out of college, also over a slight. She’s in love with Benny (Corey Hawkins), who works for her dad Kevin (Jimmy Smits), owner of a local cab company. Kevin has sacrificed a lot for Nina’s education, so isn’t too hot on her decision.

As with any good musical, much of the storytelling is done through song and dance and there are many golden sequences here clearly designed for the big screen, and that pack memorable visual and emotional punches.

The life-changing potential of a $96,000 lotto win is celebrated in a marvellous number performed at a huge urban swimming pool, with much splashing and synchronized twirling and inevitable overhead shots paying homage to the great Busby Berkeley.

The most moving number occurs during the big blackout and shows the aged matriarch of the neighbourhood in a deep sleep, dreaming about whether she should continue to live or move to the light. It’s a bona fide lump-in-the-throat moment.

In terms of sheer cinematic grace is the beautiful duet that takes place on a fire escape where the dancers defy gravity. A nod here, surely, to Fred Astaire’s classic dance number from Royal Wedding and another compelling reason why In the Heights was intended by directore Jon M Chu (Crazy Rich Asians) to be seen on a very big screen.

There is a bit of push-pull with what the musical says about the charms of a strong neighbourhood community versus the aspirations of its members to move on and out to a life they believe will be better.

Admittedly the film tries having a bob each way, and while it’s easy to allow such a vibrant, happy film to have its cake and eat it too, there’s no sensible argument against those segments in the film that endorse education as being the most valuable thing a young person can have.

As for the virtues of dropping out of college, the film – written by Quiara Alegría Hudes, who co-wrote the hit stage musical with lyricist Lin-Manuel Miranda (Hamilton) – really should have stuck to its street cred and presented a less rosy view.

In celebrating ethnic diversity in America there’s great pride on show for those from the Dominican Republic who populate the film as they boast their heritage and fight to be heard politically, seeing in the blackout their own sense of powerlessness.

Still, joyous, colourful and uplifting as it ultimately is, the film doesn’t really hold up to any deep scrutiny about its themes of multi-culturalism or ethnic stereotyping.

It certainly doesn’t say much about young Latinas standing up for themselves. Vanessa and Nina drop out of college over the ignorance of white women; Vanessa is mistaken for a waitress, Nina for a thief, due to their ethnicity.

Surely, they should have confronted these painful issues, not run from them. They’re not strong enough reasons to quit school, something the story fudges around. Dramatically, it’s a tad disappointing.

All up, though, In the Heightsis fine a sprawling entertainment with such verve and energy you won’t really feel the length or dive too deeply into the story.

FOOTNOTE: That said, in one fleeting moment near the end a delivery guy refers to a main female character as “ma’am”. She scolds him and demands he call her “senorita”; he sheepishly obliges as if he has committed a major social faux pas.

That’s rough treatment, even for a minor, single-scene background character. After all, what man in the habit of saying “ma’am” wouldn’t love to instead use “senorita” every chance he got?