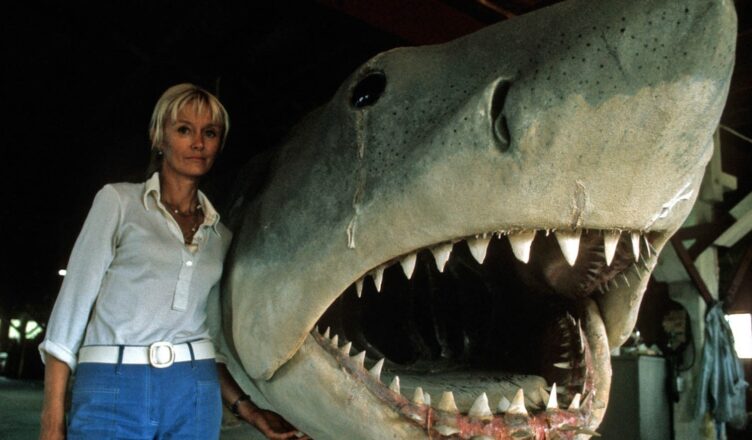 My little friend: Valerie Taylor’s life-long love of sharks is featured in the documentary ‘Playing with Sharks’.

PLAYING WITH SHARKS: THE VALERIE TAYLOR STORY *** (91 MINUTES) PG
A life-long love of sharks is one thing, but there is a precious moment in Sally Aitken’s comprehensive bio-doc where it feels like diving pioneer Valerie Taylor has taken her love a little too far.

Flipping through a book she observes how one particular photo shows how a shark is “smiling”.

Alas, the phenomenon of the smiling shark is not explored in an otherwise comprehensive, attractively illustrated skate-through of the remarkable life of Valerie Taylor who has spent a large part of her life battling the shark’s negative public image, something she was instrumental in creating.

With her late husband Ron, she produced some breakthrough footage of sharks that drew worldwide attention, first in the 1971 documentary Blue Water, White Death and most famously in the seminal 1975 summer blockbuster Jaws.

Those films brought sharks into the public consciousness, but in the wrong way as far as the Taylors were concerned. Though it’s not explicitly addressed in the film, vintage interview footage highlights the painful irony of how these shark lovers contributed to global hatred for the creatures.

Following a very entertaining account detailing the shooting of the footage used in Jaws we see their laudable, if desperate, attempts to undo the damage the film inflicted on the shark’s reputation.

The noble crusade included the development of a supposedly shark-proof diving suit so they could document on camera how difficult it is to provoke some species of shark to attack a human.

To be honest, while Playing with Sharks chronicles Taylor’s life-long attempt to correct the public record, the film itself doesn’t necessarily further the cause. If anything, there are enough images and footage of sharks-gone-bad to deepen any existing fear of these admittedly magnificent creatures.

As for fixing Valerie Taylor’s place in Australia’s social history the film does a solid job highlighting her determined spirit and many accomplishments. Now 85, Taylor is visibly frail but still full of that spirit. It’s some wonder why it’s taken so long for such a film as this to be made and what a pity one wasn’t made before Ron Taylor’s death in 2012.

A footnote to her achievements as a filmmaker, conservationist and author is how Valerie Taylor also presented a counter to the prevailing image of the outdoors woman.

Never mind beach bunnies and surfie chicks, here was an accomplished, professional woman doing important work who also happened to photograph well, an asset Taylor was happy to take advantage of to spread word of her work.

A caution: Those sensitive to footage of animal cruelty need be warned that the film contains images of fish being speared and, in one ghastly sequence, of sharks being hewn of their fins before being dumped back into the ocean, all for the benefit of the shark fin soup industry.