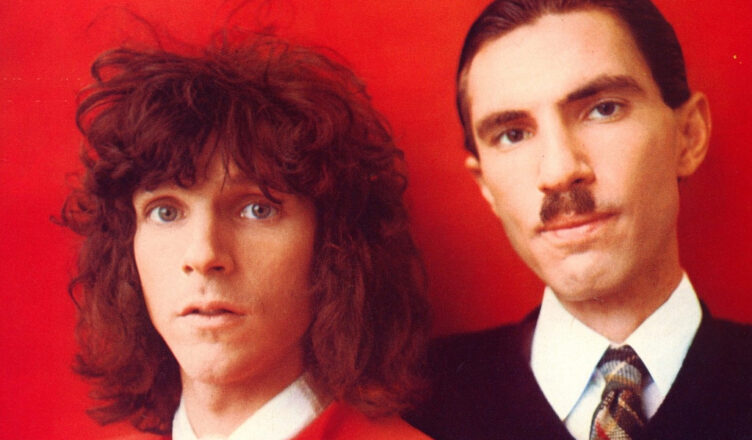 THE SPARKS BROTHERS ** (141 minutes) M
To be sure, it’s jolly nice that director Edgar Wright loves the American band Sparks and the Mael brothers Russell (the good-looking one) and Ron (the one with the Hitler moustache) so much that he has devoted a feature documentary to them.

His clear and unquestionably honourable intention is to correct the public perception that Sparks was a one-hit wonder with their 1980 song When I’m With You and is, in fact, an innovative, influential, respected pop duo that is still going strong, if under the radar.

It’s an undoubtedly fascinating premise, only Wright has allowed his infatuation with Sparks to get in the way of making a better, shorter film.

With unlimited access to the Maels and their archives, Wright makes his case to the point of tedium, often going into way too much detail.

Example: in the music clip for his 1980 single Coming Up, Paul McCartney dressed up as Ron. That’s noteworthy and funny, but undeserving of the huge amount of screen time it’s given here.

At 141 minutes the film is too long by at least half an hour. For a telling comparison consider how in The Bee Gees: How Can You Mend a Broken Heart director Frank Marshall was able to comprehensively cover a mammoth musical story in a tight 107 minutes.

Others, not so much: what Jason Schwartzman, Patton Oswalt and Weird Al have to say sound like clips from the bonus menu on a DVD.

Surprisingly, the film also adopts a very conventional chronological structure, detailing the brothers’ pre-music background before embarking on a deep dive into their career. The album-by-album retrospective is quite plodding; by the time we get to the early 199Os you really begin to feel the inordinate amount of time this is taking.

How curious that Wright opted for such a conventional mode given how famous he is for such wildly imaginative films as Scott Pilgrim vs the World, Hot Fuzz and Shaun of the Dead. Hmm. Perhaps you don’t mess with the form when you’re fawning.

To wit: is it conceivable at all that Sparks’ lack of popularity despite hundreds of songs and dozens of albums could be put down to borderline mediocrity? The film is at pains to show they’re anything but, still in a film this long there must have been room for a dissenting voice or two to break up the monotony of the adulation.

Well-made and spiced with some funny animation, The Sparks Brothers is a prolonged love letter to the band that seems aimed more at existing fans than potential converts, who might well react against Wright’s strained oversell.

Still, there is enough humor and archival material to keep it afloat, with its most likely to unfurl much better once it hits the stream, where it can be comfortably consumed in two parts.