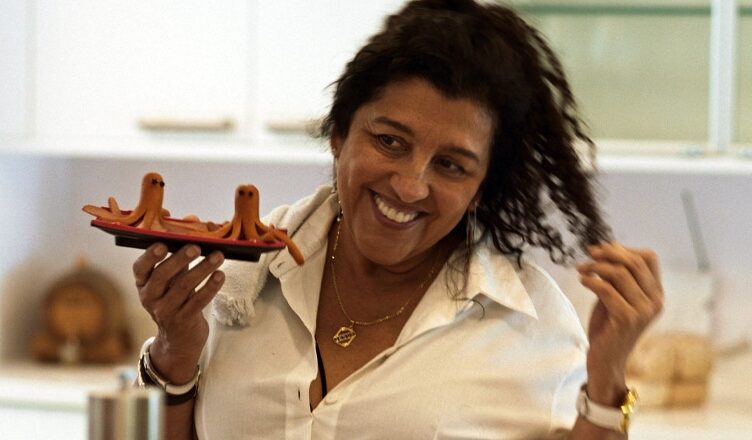 THREE SUMMERS (TRES VEROES) *** (94 minutes; subtitled) PG
Those of us heretofore unfamiliar with the work of veteran Brazilian actress Regina Casé will delight in her lively performance as Madá, a no-nonsense maid to a wealthy businessman. Full of life but financially strapped, Madá nonetheless has her own little dream of building and running a roadside kiosk to supplement her meagre income.

Told in a series of jump cuts from year to year, director Sandra Kogut gives some form to what is essentially a rambling story that follows Madá as she deals with the various domestic crises that envelope the house after the police come calling bearing search warrants.

Made in 2019, this character piece is essentially a stellar showcase for Regina Casé whose energizes the film with her vibrant presence; she invests the embattled Madá with a defiant spirit that belies the slowly emerging truth that she is alone in the world, and that she had no control over the circumstances responsible.

CRANSTON ACADEMY: MONSTER ZONE *** (85 minutes) PG
A pleasing, straight-forward time killer for kids who like their cute, animated fantasy comedies with a nice touch of the nasty, Cranston Academy: Monster Zone is a fun holiday-season ride that also shows how important it is to make sure the locks on your abandoned atomic particle reactor are kid-proof.

Too unorthodox for regular school, science nerd Danny (Jamie Bell) is recruited to attend the Cranston Academy for genius kids where his talents can be nurtured in the company of similarly gifted outsiders.

He meets the feisty Liz (Ruby Rose) and together they effortlessly break in to the nearby nuclear research facility to investigate the mysterious portal that exists within.

In strict accordance with sci-fi lore, the portal leads to another dimension, a colourful world where a wide assortment of monsters, great and small, scurry about.

Also in accordance with the story rules, these monsters breach the portal and cause havoc in the school, including one noteworthy moment where a pet hamster grows to giant size.

Some of the beasts boast neat, nightmarish design work, though their fangs and growls might scare small children. There’s certainly a surreal element to the evil brain the kids encounter in the climax, which enjoys drawing power by sucking the energy from human brains.

Though the standard of animation on show here isn’t quite the standard we’ve come to expect after three decades of films from the highly polished Pixar/Dreamworks/BlueSky/etc school, it’s passable enough to conjure some fierce looking monsters and sell some funny sight gags from the helper robots that populate the school.

THE HITMAN’S WIFE’S BODYGUARD **1/2 (116 minutes) MA
It’s perfectly apt that the totally forgettable 2017 action-comedy The Hitman’s Bodyguard should spawn an equally forgettable sequel. It’s a film nobody wanted, it’s stupid, foul-mouthed and full of forced humour – but you know what? As a Friday night time killer the film actually adds up to a bit of a lark, full of cartoonish violence and half-witted banter that is just funny enough.

Ryan Reynolds again plays goofball bodyguard Michael Bryce who tries taking a stress-induced holiday from his job when Selma Hayek persuades him to help recover her kidnapped husband, played again by Samuel L Jackson who sounds here as though he’s getting paid per F-bomb.

Hitman’s Wife’s Bodyguard is no great shakes, even with Morgan Freeman popping up in a devious role, but as throwaway action-comedy entertainment it’s passable cinematic junk food.

BUCKLEY’S CHANCE **1/2 (96 minutes) PG
As a kids’ adventure film Buckley’s Chance doesn’t quite rate full marks as a holiday outing, but you’ve got to give full credit to the makers for using a dingo where a dog should be.

Set in the splendid Australian Outback – where the light and landscape would challenge any cinematographer to make their footage look drab – a disgruntled lad from New York called Ridley (Milan Burch) arrives with his grieving mum Gloria (Victoria Hill) at his grandfather’s property.

Ridley is in deep withdrawal after the death of his firefighter and the hope is that the change of scenery will prompt a change in him.

As Fate would decree, Ridley is blessed by two miracles of good fortune. One is that he happens upon a dingo that helps him survive in the wild when he gets lost. The other is that his crusty old grand-dad, Spencer, is played by Bill Nighy.

Sporting a reasonably convincing Australian accent, Nighy presents Spencer as a loveable rogue whose weathered exterior belies the soft heart within, full of good advice and life lessons, both for Ridley and his poor mother.

As for the bond between Ridley and his canine friend, it is a point of difference with the Red Dog films yet you really do need to question the wisdom of using a dingo character (the movie dingo is actually played by a kelpie).

As every Australian knows, dingoes don’t enjoy much of a reputation and Buckley’s Chance doesn’t do much to redress that. Nor does the film sufficiently explain why a wild dingo would think of a lost child as anything but lunch.

Buckley’s Chance was directed and co-written by Tim J Brown, a Canadian filmmaker and fan of Australia who essentially used the project as an elaborate excuse to visit the Outback that had long enthralled him.

Working mainly as a producer for his production company Joker Films, Brown directed the horror films The Cradle (2007) and Devil in the Dark (2017), and the kids film Treasure Hounds (2017).

Keen to discuss the film and his experience making it, Brown kindly made himself available via Skype for a chat about Buckley’s Chance, computers that analyze movie marketability and the politics of casting.