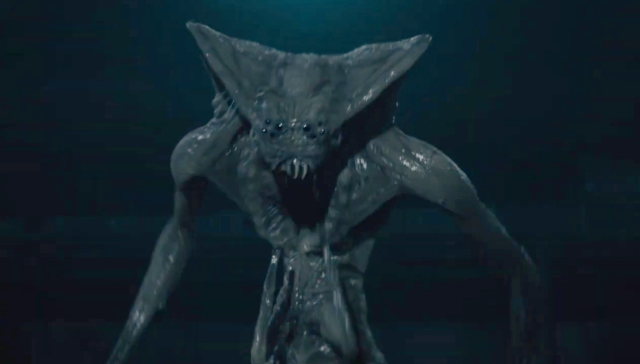 When it comes to creepy, slimy extra-terrestrial organisms infecting human bodies we immediately go to Ridley Scott’s 1979 classic Alien and that unforgettable moment when John Hurt’s apparent case of indigestion turned out to be something wholly other.

Of course, we’ve also had Invasion of the Body Snatchers (1956 & 1978; ignore the awful 2007 Nicole Kidman film The Invasion) and there was Star Trek: The Wrath of Khan and that episode of Star Trek: The Next Generation where outer space critters controlled people after squeezing themselves into their bodies.

In Sputnik we have two cosmonauts returning to Earth in 1983 after a long mission in orbit. Upon landing the recovery crew discover that the otherwise textbook re-entry was marred by something that involved exploding one of the cosmonauts head apart.

The survivor Konstantin (Pyotr Fyodorov) is put in a special, super-secret facility where he is studied by neurophysiologist Tatyana Klimov (Oksana Akinshina), all under the watchful eye of Colonel Semiradov (Fyodor Bondarchuk).

Poor Konstantin is suffering from a very particular type of amnesia wherein he can’t remember what happened to him and his mate. Nor does he have any awareness when the organism growing inside him oozes like a giant slug out of his mouth and morphs into a rather beautifully designed sleek beast that closely resembles the big-eared critters from Gremlins 1 & 2.

The being is not some parasite, Tatyana carefully explains. It’s now part of Konstantin, who can see and feel what the alien does through some weird psychic ability, just like in ET. And when the alien feeds on human prey, Konstantin gets stronger.

As in Alien, the good colonel is eager to see how his involuntary guests might be developed into a new type of weapon.

There are some great FX moments that’ll make you go “eww”, calling to mind those old-school horror films such as The Thing and Creepshow that combined fascination with revulsion.

In a nice, surprising touch, we get some strong backstory to Konstantin, which fuels his desire to escape the facility. There’s also a good deal of exposition about how the organism works and discussion over what exit strategy might work to extricate Konstantin from the place. It’s a stratum of story depth you don’t often see in films about head-splitting aliens.

Director Egor Abramenko, working from a screenplay by Oleg Malovichko & Andrei Zolotarev, mounts the film’s many bursts of action with verve and draws surprisingly solid dramatic performances from the leads in their less hectic moments.

That includes the marvelously rendered digital beast itself, which goes from being purely nasty to something you’d like to cuddle and treat to a dish of fresh milk.

If you’re fortunate enough to reside in any state other than Victoria, you can check out Sputnik at the Ritz Randwick & Dendy Newtown (NSW), the Dendy Canberra, the Dendy Cooparoo (Qld) and the magnificent Wallis Cinemas (SA). You can also rent it on Foxtel and Fetch from 1-14 October, then stream it from 28 October until time immemorial.