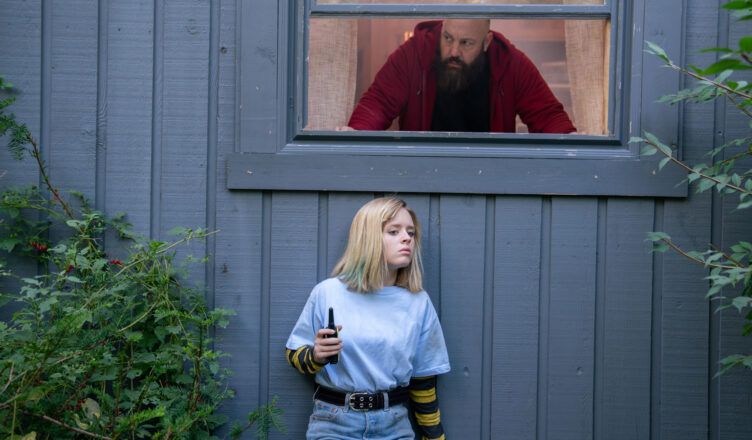 BECKY *** (93 minutes) MA
You’ve got to respect a girl like Becky (LuLu Wilson). When escaped convict Dominick (Kevin James) demands that she give him the key he’s after, she replies in terms that leave little room for argument over her ability to let bad guys know how she’s feeling.

Made with what appears to be a deep love for the exploitation horror thrillers of the 1970s such as I Spit on Your Grave, Jonathan Milott & Cary Murnion – directing a screenplay by Nick Morris, Lane Skye & Ruckus Skye – deliver an enjoyable, tense, throwaway thriller with a lot of gore on the menu that doesn’t outstay its welcome.

Becky is a disgruntled young teenager with a constant scowl face. She’s upset over the loss of her mother and angry that her dad (comedian Joel McHale from Community) is wanting to move on and marry Kayla (Amanda Brugel) who has a young son.

Fuming at the news, Becky stomps out of their house – suitably located, as per genre requirements, deep in the woods, far from the nearest neighbour – and in to her secluded art-studio cubby house, accompanied by her trusty, very well-trained pit bull.

While Becky stews and sorrowfully scans the painting of her once-happy family the main house is visited by bad guy Dominick (James) and his none-too-bright pals who have already chalked up a terrible body count in their escape from a prison van.

Dominick is after a special key that is hidden in the basement. Becky has the key so Dominick, speaking to her over the toy walkie talkie he finds in her bedroom, endeavours to retrieve it by persuading her to give it up, making clear the violence he’s willing to use.

What he doesn’t know is that if you push Becky too far she’ll push back in like manner, and then some. That’s where the gruesome fun begins in a throwaway, blood-splattered thriller suitable for anyone seeking a strong dose of cathartic mayhem, with a spot of revenge tossed in for good, meaty measure.

Best-known as a loveable, goofy everyman, Kevin James (The King of Queens; Paul Blart: Mall Cop; Grown Ups) makes a meal of his golden opportunity to turn nasty in a role that was originally going to present the same gift to British actor/comedian Simon Pegg (Shaun of the Dead; Hot Fuzz; Mission Impossible; Big Train, etc).

He does an effective job, too, his menacing presence boosted by his shovel beard and the tattoos on his shaved head. You don’t expect much subtlety in a film such as Becky but, boy, did they go to town in this department.

Not only is there a large swastika inked on the back of his cranium, next to them – just in case you didn’t get the point that he’s bad news – is the insignia of Hitler’s infamous SS (responsible for prosecuting the Holocaust) as well as the circular neo-Nazi Black Sun stamp. One small Nazi sign would have been plenty, but the tattoo oversell is in keeping with the film’s love of laying it on thick.

And when it comes to that, Becky doesn’t muck around. Blending Home Alone ingenuity with

While James a convincing job in a two-dimensional role (another genre requirement), due credit must be paid to the performance by 14 year-old Lulu Wilson, who adds to her impressive roster of horror roles in such films as Ouija: Origin of Evil, Annabelle: Creation and The Haunting of Hill House.

It is upon her small shoulders the film truly rests. As the film’s unflinching angel of vengeance she easily gives the kids from Children of the Corn a run for their money as Becky makes you rethink who is prey and who is predator.