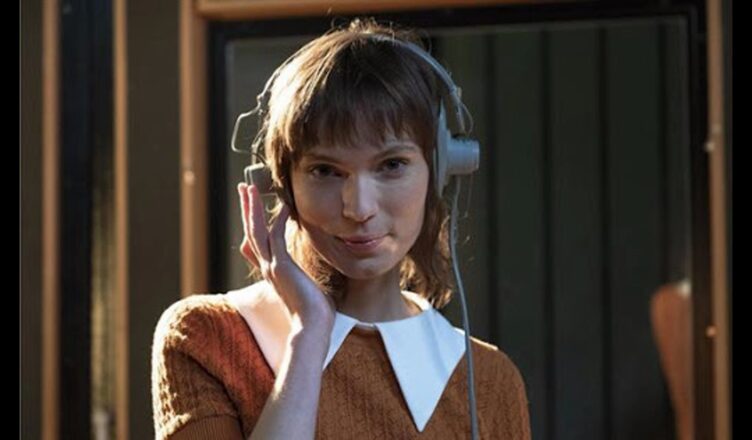 Giving voice: Helen Reddy (Tilda Cobham-Hervey) sings up a storm in ‘I Am Woman’.

I AM WOMAN **1/2 (115 minutes) M
We all love the song. Of course we do. Who couldn’t? Those stirring lyrics. The undeniable sentiments. The championing of principles that heralded a new era of equality and respect for women.

The song became an anthem that crystallized the values fuelling the reprise of the feminist movement in the decade of change that was the 1970s.

And there, at the microphone in countless TV and live appearances, stood Australian singer/songwriter Helen Reddy, providing the vocal power fist for her sisters as they marched and chanted and screamed for equality.

And now, the movie. I Am Woman, directed by Unjoo Moon and written by Emma Jensen, offers a broad-strokes, populist biopic that kicks off with a naive Reddy (Tilda Cobham-Hervey) arriving in New York in 1966 with her daughter in tow.

Striking out on a recording deal, Reddy works her way through the club circuit to huge success with her signature tune and many other hits, thanks largely to her wily manager/husband Jeff Wald (Evan Peters) and journalist Lillian Roxon (Danielle Macdonald), a close friend and confidante who helped awaken Reddy’s inner feminist.

So, what kind of job does the film do? So-so. It gets better as it goes along, but the film too often stumbles in its attempt to shoehorn a life into two hours of melodrama that deploys a lot of platitudes and skips over a whole bunch of stuff you would have thought was central to the story.

I Am Woman is a film of two halves: the drama of the second, as Reddy copes with fame and the abusive Wald’s drug taking, making up somewhat for the clumsiness of the first, which is essentially a dramatised CV of Reddy’s early career.

There are some huge omissions – some forgiveable, some not – and while Tilda Cobham-Hervey puts in a noteworthy performance she’s not always able to rise above the film’s cavalcade of cliches.

One of the big trip wires with biopics – in copious evidence here – is being so anxious about squeezing in research material that story exposition is delivered in much the same manner, and with the same measure of finesse, as a trawler dumping fish onto its deck.

(It occurred in the Elton John film Rocketman and in the recent Australian mini-series Hoges and Olivia Newton-John: Hopelessly Devoted to You.)

This shoehorn syndrome can prompt a lot of clunky contraction and dialogue that sounds like bullet points from the screenwriter’s notepad.

In I Am Woman it no doubt accounts for the all-too-neat story arc that casts Reddy as a cultural hero who Fate has decreed shall be in the right place at the right time to author her anthem for the neo-feminist uprising.

It also explains why every man she meets is a patronising pinhead and every woman a self-aware proto-feminist.

Apart from all the tinny dialogue, probably the most irritating part of the film’s first hour is the impression that Reddy wrote the song alone.

With the women’s movement bubbling all around her Reddy is presented as a medium who is merely channeling the collective angst of women into her song. It’s as though the Cosmos is feeding her information, sentiments, news clips and lyric lines so she can fulfil her destiny and write I Am Woman.

While this serves the film’s linear hero narrative, which Moon pushes very hard, it also highlights the first of the film’s two big story fails.

As almost everybody – certainly those who grew up with the song in the 1970s – knows I Am Woman was co-written by a fellow Australian, Ray Burton. Yet Burton’s contribution isn’t mentioned in the film.

This is bizarre for two reasaons.

Firstly, it would have taken but a scene or two to acknowledge the fact that the song had a co-writer.

Secondly, acknowledging the fact that this feminist anthem was co-composed by a man would have underscored the old-school feminist ideal of equality and fairness the film champions. Presenting men as allies rather than adversaries would not have diminished Reddy’s achievement, it would have fortified it.

Choosing to side-step such a rich dramatic factor was a mistake and opens the film up to accusations of hypocrisy, though that’s going a bit far.

It’s far more likely the all-too-convenient omission owes more to sloppy storytelling – a major flaw in so many Australian films in 2020 – than any agenda.

The film’s half-way point is marked by Reddy finally performing the song she has created. She does this in a club to an audience of women who, in keeping with the film’s annoying vibe of pre-destination, is immediately embraced as a theme song for the sisterhood.

It’s not immediately embraced by the guys at the record company whose resistance to it, and Wald’s reaction to them, makes for one of the film’s stronger scenes.

From there the film upshifts dramatically as we see Reddy dealing with her rising popularity, her celebrity and the excesses of her husband Wald who has taken a liking to hard drugs so much he is willing to snort cocaine off a carpet.

The easing of cliches allow for a decent handful of notable moments: Wald organizes fake calls to radio shows requesting the song; Reddy hits friction with her teenage daughter Traci (Molly Broadstock); and, in the film’s best musical sequence, Reddy performs Angie Baby, one of her many hits.

The direction by first-timer Unjoo Moon toggles between good and mediocre.

She’s at her best in the film’s redeeming second half as we see Reddy rising above feminist rhetoric, embracing her independent spirit and standing up against Wald. It’s here where we see Cobham-Hervey at her best.

Yet Moon also throws away key moments, such as when Reddy wins a Grammy and, from the podium, declares that God is female. Why bury such an historic moment?

To be fair, the demands of concision inevitably result in many things being sidelined or skipped over.

But while some cases are understandable – such as Reddy’s first marriage – others clearly warranted inclusion, suggesting I Am Woman might have worked better either as a mini-series or as a feature film with a more inventive structure and a more adventurous director.

As a biopic, the film places too much focus on Helen Reddy’s music at the expense of Reddy’s remarkable career on American television and her not-so-stellar, but equally noteworthy, work in film.

This is the film’s second big story fail.

There’s fleeting acknowledgement of The Helen Reddy Show, which Reddy landed in an overwhelmingly male-dominated media landscape. How’d that happen? It surely wasn’t granted on the basis of one hit song.

Also, there’s nothing about her fabulous comedy work with Carol Burnett or Flip Wilson. Equally unforgiveable, there’s no mention of her film work, of Pete’s Dragon or of her crowning achievement as the singing nun in the disaster classic Airport ’75.

How much fun would it have been to see recreations of her comedy and of the famous scene where she sings to Exorcist star Linda Blair? They could have added some much-needed humour.

Though the cinematography by Oscar-winning Dione Beebe is keen on sumptuous back lighting, the film’s editing mode has a very conventional, made-for-TV rhythm. That’s disappointing. By now filmmakers should know they are allowed to hold shots for longer than three seconds.

The film might be peppered with cliches, melodrama and awkward story leaps, but whatever its flaws I Am Woman may be most valuable as a reflection on the state of feminism then and now.

As a work of pure nostalgia I Am Woman works quite well for quite a few minutes in its opening reels as it pays tribute to the principles and solidarity that defined the feminist movement of the early 1970s.

Older feminists who were there at the barracades and younger old-school feminists who have seen all the archival footage on YouTube will appreciate those moments in the film as rousing testament to a time when everyone seemed united behind a noble, well- defined cause.

Sad to say, the film, however unintentionally, offers a stark contrast to the situation today where defining feminism requires a symposium rather than a sentence, where the founding ideals have been lost in a stew of factions and in-fighting between feminists of various waves.

In I Am Woman it is possible, just for a few precious minutes, to forget the fractured modern-day mess the movement has become and bask in revisiting that empowering period when feminism had focus and the will power to influence real change.

This message was received 11:51pm Saturday 7 November, 2020:
Thank you kindly for the detailed mention Jim. I appreciate the fact that you publicly exposed the fact that it took a Man “and” a Woman working together to construct one of the most powerful women’s anthems of all time. Your research on the I Am Woman song is to be highly commended.
Regards,
Ray Burton

I Am Woman is now streaming on Stan.