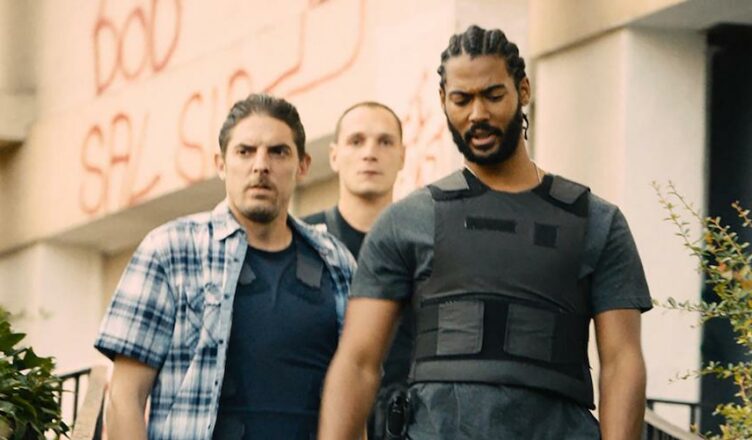 Us against them: Three French cops confront the violence of a poor Parisian neighbourhood in the crime drama ‘Les Misérables’.

Chris is in charge and he’s an ass-kicking hothead who seems to relish the fact that so many of his constituents are black, Islamic, young and poor. Makes them rich targets to pick on.

Tensions are usually high on the job, but when a visiting troupe of gypsy circus performers get angry with the local community over the theft of a lion cub things really heat up. The hunt for the chief suspect leads to a violent encounter that, inevitably, leads to a much bigger one.

In an impressive debut that was nominated for a Foreign-language film Oscar, director Ladj Ly makes neither excuses nor apologies for his coarse characters, regarding corruption on both sides of the blue line with a cool eye that suggests how bad behaviour can be prompted by circumstance.

The climactic 15 minutes are powerful and confronting, with the film’s finely judged final image designed to make you wonder about what happens in the second after the screen goes to black.

The reason behind the film’s classic title is that the events occur in the same area Victor Hugo wrote his eternal tome. A key Hugo quote frames the film and Chris presents as a modern-day version of the psychotically dedicated lawman Javert when he declares “I am the law”. It’s one of the better examples of a film using classical references to make a point.

MADE IN ITALY *** (95 minutes) M
An estranged father and son get a rare opportunity to explore the hope of reconnection when they decide to sell their Tuscan holiday house in Made in Italy, a warm, light, satisfying serving of congenially cliched comedy-drama written and ably directed by actor James D’Arcy (Dunkirk).

In the final stages of an ugly divorce, Jack (Micheál Richardson) discovers he’s about to lose his job as the director of the art gallery owned by the parents of his soon-to-be ex-wife Ruth (Yolanda Kettle). They want to sell the place, but Ruth, calling upon the last remaining skerrick of regard she has for Jack, gives him a month to raise the money so he can buy the gallery himself.

So off to Tuscany he goes with his semi-reclusive, sexually active dad in tow. Robert (Liam Neeson) has barely been in contact with Jack since the untimely death of his Italian wife 15 years earlier, an event that also stopped his booming painting career in its tracks and ceased all visits to their Italian getaway.

The pair bicker and banter on the way, each happy to irritate the other but neither willing to discuss any real issues behind the void between them.

But, lo: once they arrive and see the ramshackle state of the once-grand mansion, guess what? They understand as instantly as we do that this isn’t just some sun-baked Tuscan house – it’s a whopping great big metaphor, custom-built for their circumstance.

It’s a pleasantly predictable and efficient device, full of easy-to-digest kitchen-sink symbolism with the details of the renovation – the patching of holes, replacing plaster, fixing masonry, filling in cracks – reflecting the repair and renewal of their father-son bond.

If you’re looking for anything especially deep or surprising, forget Made In Italy; it isn’t the film for you. It’s designed by D’Arcy, whose directorial debut this is, as an easy viewing experience with some bittersweet touches as Neeson puts in some especially good work both comically and dramatically alongside a somewhat bland Richardson.

As a side note, the film was embraced by the leads because it spoke to their own experiences. Neeson and Richardson are father and son in real life and were devastated when they lost Natasha Richardson in 2009 after a skiing accident. That theme of loss apparently resonated deeply with them.

This might account for why Neeson excels so naturally in the film’s key emotional scene when he tries confronting the depth of his loss. It’s a pretty unforgettable moment, ironically ensconced inside a spright little rom-com that is almost designed to be forgotten.

Stuck in the latter-life doldrums where his life as an edgy artist and cartoonist has stalled, curmudgeon and diehard technophobe Victor (Daniel Auteuil) is distressed over his deteriorating marriage to the high-spirited, highly sexed Marianne (Fanny Ardant). If only he could go back in time and re-experience the flush of youth and the passion he felt when he first met her.

Luckily for him, his son’s friend Antoine (Guillaume Canet) runs an improbable Fantasy Island-type service that specializes in lavishly recreating historical scenarios for people (at what is, presumably, a huge cost).

So back to the meticulously re-imagined smoke-filled 1974 Parisian cafe he goes to meet his “wife”, played before him by Margot (Doria Tillier). Margot has her own personal troubles working through the last rocky stages of her relationship with Antione, who is directing everything from behind a one-way mirror.

The film sports an engaging, inventive premise, certainly as far as romantic comedies go, with writer/director Nicolas Bedos having fun messing with the genre’s “meet-cute” convention and mashing together ideas about memory and fabricated experiences we saw worked over in films such as The Truman Show, The Game, Total Recall and Eternal Sunshine of the Spotless Mind.

It’s fluffy French fare that maybe waffles on a bit too long, but it does a fine job playing around with the rom-com formula and is graced with a typically super performance by Auteuil, a French film veteran whose formidable filmography is longer than a supermarket receipt.

Though there’s no formal mention of a proposed remake online, the film feels like a candidate for Americanization by some formerly hot actor who could do with a late-career boost. Perhaps if Jim Carrey’s not busy…?

After a few too many minutes of bile spitting they come across a German minesweeper. Climbing aboard thinking they are safe they soon discover the ship is populated with creatures of the netherworld who, to put it mildly, are wholly uninterested in the outcome of World War 2 and far more interested in ingesting their guests.

Young Australian directors have a great taste for horror and here Justin Dix (who co-wrote the screenplay with Jordan Prosser) delivers a ripper, blood-soaked gorefest replete with top-notch visuals and a quickening pace as he dials the glorious mayhem up to 11.

And let’s be honest: as with all good B-grade exploitation horror films, Blood Vessel has just enough investment in its creepy, claustrophobic setting and its roster of characters to justify a noteworthy showcase of some pretty gruesome effects, with no pretensions about delivering anything other than a few well-judged moments of nastiness in a suitably foreboding locale.

Shot on a low budget in Williamstown, the film has the reassuring feel of old-school 1980s horror films such as The Thing and Creepshow, and though there’s a bit too much yapping the atmosphere is strong enough and the splatter copious enough to make for enjoyable Friday night viewing, best accompanied with a pizza and sugary soft drink.

And a special salute for that killer ending. Talk about knowing your genre.

DEERSKIN **** (77 minutes; subtitled) MA
We all watch movies in the hope of seeing something we’re unlikely to ever forget. That’s certainly the case with Deerskin, a bizarre, off-centre, singularly demented pitch-black comedy about a man who wants to be the only person in the world who owns a jacket.

Sounds crazy? It is. But as with most cases of movie craziness there is a twisted logic driving the madness, and it’s superbly mounted by writer/director Quentin Dupieux, whose sense of the deranged is dispatched with a cool matter-of-fact air that makes the proceedings as disturbing as they are funny.

Agonizing over his failed marriage, Georges (Jean Dujardin, best actor Oscar winner for The Artist) comes across a fringed deerskin jacket with which he instantly becomes obsessed. In acquiring the jacket he also gets an old video camera as a bonus. These two objects assume a power over Georges that will change his shattered life.

Inspired by some inner lunacy likely triggered by the emotional trauma of his divorce, Georges determines that he shall now occupy a special place in the world, being the only person to possess a jacket.

He checks into a quaint hotel in a remote alpine village posing as a filmmaker, a ruse he shall use to begin depriving people of their jackets – whatever the cost.

Into his scheme he recruits Denise (Adèle Haenel from Portrait Of A Lady On Fire). She’s an aspiring film editor so passionate she re-cut Pulp Fiction in chronological order. She appears quiet and gullible, happy to fork over money to finance Georges and his psycho movie project. Yet there is mystery behind her reaction to the grotesque footage Georges gives her to edit. To a normal person it would be shocking, horrific, terrifying.

But normality doesn’t have a place in the world created here, a world where sanity shifts ever further away as these two chilling characters execute their debauched artistic vision.

Despite Deerskin being a squib of a film at a mere 77 minutes, Dupieux maintains an unhurried pace to allow the dark humour and moral depravity of the piece really sink in.

And kudos to actors such as Jean Dujardin who invest in these challenging, off-beat roles after breaking Hollywood over their knee. He really nails the manipulative edge of a man who has lost his marbles.