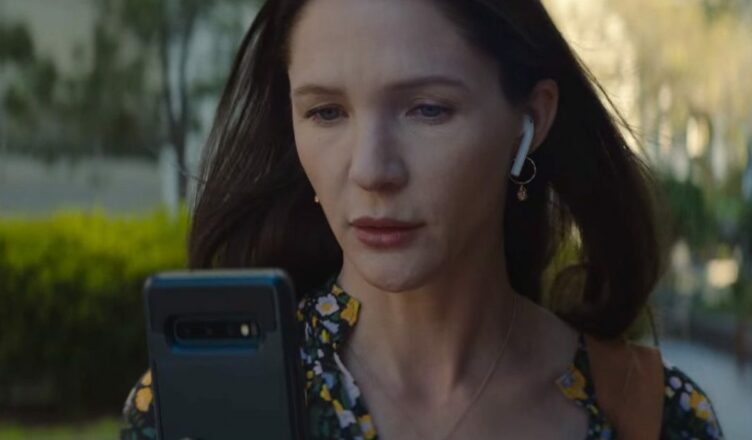 Looking for clues: Jessie Collins in the cyber-thriller miniseries ‘Clickbait’.

CLICKBAIT *1/2 (371 minutes; eight episodes) MA
whole series review
Ever had that really nagging feeling when you’re in the middle of episode whatever of some hyped-up “event” miniseries that the thing might have worked a lot better as a movie, or at least as something that was a tad shorter by, say, two to four hours?

That’s pretty much the case while enduring Clickbait, an exceedingly mediocre, massively overlong cyber mystery-thriller that turns out to be neither thrilling nor all that mysterious.

There’s no faulting the intriguing premise, though.

One morning nice family man Nick Brewer (Adrian Grenier from Entourage) turns up in a video looking all beaten up and holding a sign that says he’ll die once the video gets to five million views. He holds up a second sign that says he abuses women.

Naturally, everyone goes into a tizz; his sister Pia (Zoe Kazan); wife Sophie (Betty Gabriel); mum Andrea (Elizabeth Alexander); along with his sons and various other friends and colleagues from the school where Nick works as a physical therapist.

On the case is detective Roshan Amir (Phoenix Raei) who liaises with the stricken family as they remain in their house under siege from the media, which has taken up residency on their front lawn.

Each episode is told from the perspective of a different character, a mildly interesting, though far-from-original storytelling device (see The Slap; Family, the 1994 British miniseries) presumably intended to illuminate different dubious corners of the internet where people can do things anonymously by taking on the guise of another person, real or imaginary.

And sure enough the show brims with tech talk about apps, hacking, catfishing (pretending to be someone else on the internet), metadata, data harvesting, trolling and so forth, including online communities who examine evidence.

Yet for all its cyber babble, Clickbaitis a strictly boiler plate B-grade whodunnit, complete with false leads, red herrings and an ever-shifting focus on who the culprit might be.

Fine fine fine. Trouble is, pedestrian direction coupled with an inordinate running time and pacing that is positively Fitzcarraldian renders most of Clickbait a way-way-overlong procedural dirge with little colour or character.

OK, sometimes to build tension and suspense you need to downshift a bit. Indeed, the art of the slow reveal is embedded into the mystery genre.

But slow is one thing. The pace of Clickbait is painfully glacial, giving your mind too many excuses to drift off and think about other things, such as what else is on.

It’s a liability not-at-all helped by an over-arching lack of storytelling or visual style.

In one memorable moment, Pia quips: “This is like something out of a Hitchcock movie.”

Far too often bland exposition is plopped into dialogue as the main characters stumble from clue to clue and suspect to suspect.

Even the look of Clickbait is drab, infatuated as it is with the 21st-century cliché of super-imposing text messages into the frame so that they appear to hover, ghost-like, next to the characters.

Given how cyber-driven the yarn is, we consequently spend huge amounts of time looking at people looking at screens, tapping into phones, reading and responding to texts. It’s wearying and dull.

Not that Clickbait is entirely without merit. Some of the performances are unremarkable, yet there is some really good work from Daniel Henshall (Snowtown; Any Questions For Ben?), Jessie Collins Zero Dark Thirty), Abraham Lim, who does oily work as a rat journalist, and Jaylin Fletcher, who plays Kai, Nick’s youngest son.

Production-wise, it is very difficult to reconcile the reported $36 million budget with the show’s wholly unimpressive production values, with Melbourne standing in for Oakland (across the water from San Francisco) and various other places in California.

To filmmakers everywhere: please stop doing this! The two locations are not interchangeable. It just doesn’t work. American streets do not look like Australian streets, something The Very Excellent Mr Dundee taught us.

The skies are also different, which probably accounts for why the light quality of Clickbait is all over the shop. The location shots of Oakland peppered throughout the series stick out like a sore thumb compared to the comparatively dank complexion of the scenes shot in Melbourne.

That said, there is some fun to be had for inhabitants of Melbourne to play “spot the location” and gauge how successfully the city’s lanes, alleys, overpasses and streetscapes pass for the urban jungle of America.

It’s a mildly diverting activity that might help you endure should you make the questionable commitment to spend six-plus hours watching a story that, in all fairness, could have been told in a third of that time.