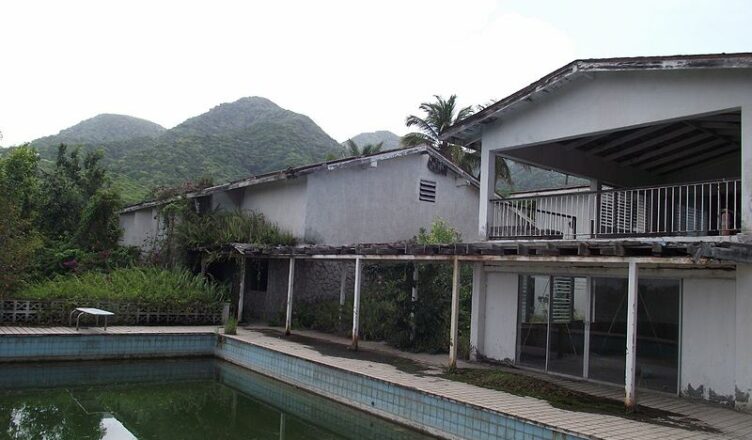 Derelict dream: The remains of an island studio shimmer back to life in ‘Under the Volcano’.

UNDER THE VOLCANO ***1/2 (96 minutes) M
There are plenty of sound and solid reasons to strongly recommend Under the Volcano, a wonderfully entertaining, thoroughly researched, insightful look at the truly unique creative environment Beatles producer Sir George Martin created on Montserrat, a tiny Caribbean island host to many attractive tropical features, including a live volcano.

It’s just one of the many archival gems studded throughout Under the Volcano, a captivating look back at a brave venture, masterfully finessed from what was obviously a series-sized mountain of material, both vintage and new, by director Gracie Otto, who gave us 2013’s superb The Last Impresario.

Built in 1979, the Monserrat studio was a hotbed of creativity; artists such as Paul McCartney, Jimmy Buffet, The Police, Elton John, Duran Duran, Ultravox, Earth Wind & Fire, The Rolling Stones and Dire Straits (amongst many others) spawned works that dominated the charts and shaped the music landscape of the 1980s, and beyond.

The place was intended as a haven away from the craziness and pressure of the music industry, an oasis where artists could relax and feed off the natural beauty and friendliness of the island.

We see how that serenity indeed influenced certain artists at key points in their careers, the most notable being Paul McCartney’s arrival shortly after the murder of John Lennon.

Intrinsic to the operation of the studio and its brief to get the creative juices flowing was the presence of many charismatic locals who not only enhanced the stay of their famous guests but sometimes inspired them.

Far from being background characters, the film pulls focus on them as being central to Sir George’s studio, as important a part of the story as any of its artists or state-of-the-art recording equipment.

The atmosphere didn’t always have the desired effect, though, and the film isn’t shy about exposing the grittier side of what went on.

Band tensions, hard-wired habits and youthful myopia sometimes arrived with the luggage and continued to boil along with the giant cauldron of lava at the island’s rumbling peak.

Replete with revealing interviews and archival nuggets – including audio of Stevie Wonder performing at a local club, recorded on cassette – Under the Volcano provides a valuable snapshot of a very special, very lucrative episode in pop music history when labels were happy to indulge their artists and money flowed freely, along with certain other things.

While some big names were happy to go centre-frame for the film – Sting; Mark Knopfler; Jimmy Buffett – the presence of others, such as Elton John and Paul McCartney, is felt mainly through archival footage.

With propulsive editing giving the film a smooth, slick flow, Otto and her collaborators vividly capture the spirit of Sir George Martin’s musical hothouse and of the island’s boisterous character.

Uplifting and joyful in tone, Under the Volcano lands as a fascinating, celebratory, occasionally thorny cross-section of a bold and unique artistic endeavour, the success of which left an indelible stamp on pop culture that is clearly evident today.

Alas, there’s no getting away from the 1995 eruption that laid waste to a large part of the island, claiming the capital Plymouth and bringing the studio to a sad end.

Perhaps unavoidably, the film is framed by the disaster; a melancholic nostalgia stirs as brooding shots of the studio’s deteriorating husk underscore how the sad structure is slowly being swallowed by the island’s foliage.

Moving though these scenes are, perhaps the most affecting moment comes courtesy of Sir George himself.

As he surveys the ruin that was once his dream he defies despondency and proves resilient, philosophical.

It’s a well-judged touch that proves very touching, a perfect and fitting full point to a colourful, terrifically told story that pays tribute to the creative gallantry of Sir George Martin’s incomparable vision.