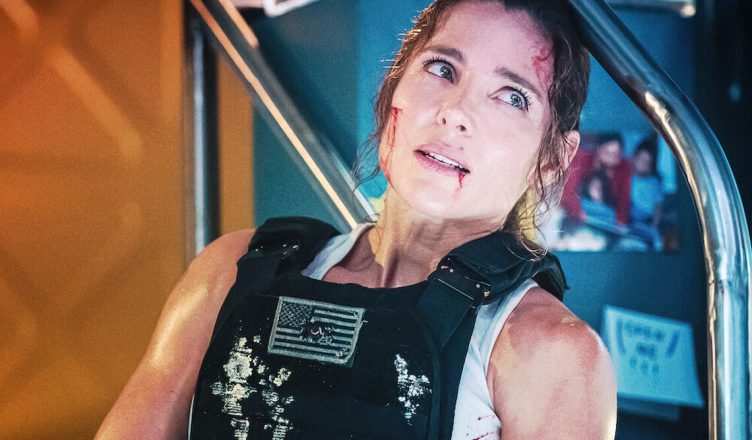 Taking one for the team: Elsa Pataky as a kick-ass action hero in ‘Interceptor’.

INTERCEPTOR *** (97 minutes) MA
In a proficiently executed, tighly wound action thriller, disgraced soldier JJ Collins (Elsa Pataky) is assigned to an isolated missile installation in the middle of the Atlantic, home to ordnance that can knock down nucklear missiles bound for the US.

As luck would have it she arrives on the same day that terrorists steal 16 mobile nukes in Russia with the intention to wipe out America once they’ve wiped out the two facilities equipped to stop such an attack.

One facility has already been overrun so it’s up to the super-feisty, super-confident, feminist poster girl JJ and her nervy, nerdy male colleague (Mayen Mehta) to keep the bad guys, lead by the smarmy Alexander Kessel (Luke Bracey), from getting into the control room and gumming up the launch mechanism.

Marking the impressive feature film directing debut of mega-best-selling action author and movie fan Matthew Reilly, who is credited with writing the screenplay with veteran Stuart Bettie (Collateral, Australia, Tomorrow, When the War Began, which he also directed), Interceptor stacks up nicely as a reasonably tense, rather violent bit of fun and games with plenty of deluded, ultra-right wing patriotism thrown in for those eager to chew on a bit of psycho-coloured politics while JJ tries to out-think, out- blast and out-kick her adversaries.

With the exception of a couple of wonky seconds towards the end, the visual effects are pretty solid, especially with the rendering of the isolated ocean-locked missile base where most of the action happens.

Performance-wise, Pataky is credible and agile, doing a fine job both during the action shenanigans – she’s got great guns – and in the flashbacks that fill in her troubled backstory (Colin Friels plays her American dad). That said, she is a little too self-assured and cocky as the hero of the piece, especially when exchanging barbs with Kessel through blast-proof security doors.

Bracey is serviceable as the film’s chief villain, but it’s Aaron Glenane who proves to be the film’s chief scene-stealer. It’s a beautifully cheesy performance. You can easily imagine the dude storming the Capitol Building with the rest of the Trump Nuts. He’s that kind of crazy.

Admittedly, there are one or two tiny story holes in Interceptor that you could easily fly a salvo of nuclear missiles through. There’s no mention, for instance, of the automatic US retaliation such an attack would undoubtedly trigger.

Also, the motive to attack rather than use the nukes to hold superpowers to ransom is somewhat watery. OK, maybe that’s what a Bond villain would do, but it is a bit of a story wrinkle they could dream up something more water-tight – though, in all likelihood, these narrative issues are matters only prehistoric movie critics would worry about.

The film, an Austrlaian-American co-production, is having a very brief cinema run before hitting Netflix next Friday (3 June).

So what does that mean? It means that in order to bring you this early review of Interceptor your humble servant had to buy a ticket to see it – a ticket, ladies and gents, that cost more than the monthly fee for the Netflix service. Talk about dedication.

There’s one major issue with Interceptor – the trailer.

For decades now movie trailers have regularly given away far too much of the story. Well, the trailer for Interceptor gives away absolutely everything, including the ending. Couldn’t they have worked a bit harder to put together something that kept a bit of mystery?

Oh, and you might have fun trying to spot Chris Hemsworth (Thor) in the film. He is Elsa Pataky’s husband and an executive producer on the film. He loves a laugh, does Chris. That’s why we love him.