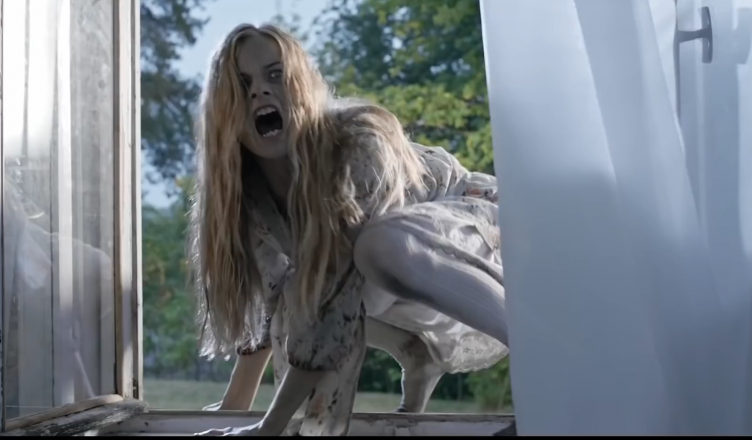 HATCHING ***1/2 (91 minutes; subtitled) MA
Hot on the heels of The Innocents comes another Scandanavian horror treat, this one from Finland, another land that likes a slow-burn and where the ominous sight of a child wandering through the woods all on their own own is asurefire portent that major creeps are on the way.

Tweenager Tinja (Siiri Solalinna) is forever trying to please her beautiful, domineering mother (Sophia Heikkilä), a with-it 21st century woman who loves blogging about how picture perfect her family is, what with two lovely kids, an ever-smiling doormat of a husband (Jani Volanen) and a house straight out of Home Beautiful.

Coming soon is a gymnastics competition mum is pushing Tilja to do brilliantly in. Trouble is, Tilja’s concentration is divided between training and the otherworldly critter she’s hiding in her bedroom.

The discovery of an abandoned egg deep in the aforementioned forest triggered a maternal impulse to take it in, help it hatch and care for the bird until it’s fit to fly off into the world.

Luckily for us the egg doesn’t spawn a cute bird but a slimy beastie that resembles a pteradactyl dipped in tomato paste. Residing it her room, awkwardly hidden from Tilja’s nosey family, the thing grows in a very peculiar way.

It also develops a sort of psychic connection with Tilja whose fears and anxieties it begins to reflect and deal with in a rather violent and gory manner, as if acting as a vengeful extension of her sub-conscious.

The set up is obviously designed to get you thinking about what a clever psychological edge the film has, allowing you to read all manner of insights into Tilja’s struggle with her mother issues, rivalry and the bothersome dog next door.

Essentially though, what we have here is a very effective body horror thriller with ringing echoes of early David Cronenberg and John Carpenter, both of whom were clearly a huge influence on director Hanna Bergholm, who came up with the story written by Ilja Rautsi.

The many, nicely administered gross-out moments in Hatching are coupled with some wonderful special effects work, the critter being completely rendered practically with animatronics, prosthetics and high-end movie puppetry.

It’s absolutely marvellous stuff and another testament to the organic look and feel practical effects can have over digital visuals. Of course, the film blends in a lot of digital visual effects as well, demonstrating how digital and analog techniques complement rather than compete, especially when pursuing the best, most horrifying movie possible.

Sadly, these promising narrative strands are sidelined by a limp and silly murder investigation. All the constant gagging and unnecessary musical numbers sap the yarn of any real feeling or consequence, with the closing scene at the bank signalling how little the story has actually moved. A real pity.

ABLAZE *** (81 minutes) PG
The remarkable, all-but-forgotten life of aboriginal activist, artist, entrepreneur and filmmaker William Onus (1907-68) is saved from the obscurity it was otherwise assigned by his grandson Tiriki Onus who, with co-director Alec Morgan, presents a sterling odyssey of revelation.

Tiriki’s journey of discovery is ignited by the discovery in the national film archive of an old unfinished, trackless 10-minute film reel made by William Onus, and of a suitcase crammed with uncategorized, uncaptioned memorabilia about his extraordinary life.

Piecing together his achievements as an artist and an activist fighting for the recognition and rights of First Nations people, the film offers a wide-ranging, sometimes distressing cross-section of Australia’s mistreatment, misrepresentation and oppression of indigenous folk, the details of which can occasionally be startling.

We see the secret surveillance footage of young agitators, the shameful, dismissive attitude towards indigineous men who fought in World War 2 and even the ghastly efforts of mainstream theatre to present indigenous culture to a mainstream audience.

The film certainly does a good job tracking the growing media attention paid to issues such as dispossession and discrimination, with the nuclear tests on aboriginal lands and appalling living conditions being points of particular emphasis.

For instance, we are given vivid glimpses of the disgusting poverty endured by indigenous people in Fitzroy, where Onus lived for a time and where children were so deprived they got an orange for Christmas and were used to sleeping with bedbugs.

More uplifting is the role Onus played in the lead-up to the 1967 referendum, which saw almost 91% of Australians voting for First Nations people to be recognized as Australians. As early as 1960 he was a firebrand on TV, articulate, passionate and commanding the attention of his fellow guests.

The spots of animation used throughout the film (usually to recreate events) are a little scratchy and cheap-looking, and some of Tiriki’s narration can get a tad haughty, sometimes labouring points that are obvious enough. We really don’t need to be told that white dancers dressing in black costumes to perform a corroberee on stage is a bad look. The images speak loudly enough.

Ablaze takes its title from the inferno that apparently destroyed most of the films William Onus made. It’s yet another historical example of an invaluable film archive being “lost” due to a casual approach to film preservation.

Thankfully that attitude has long been flipped, and Ablaze goes some way to making up the loss and joining the dots in the once-neglected life of William Onus.

MAIGRET * (89 minutes) M
Yes, we love him dearly as the great actor he once was but Gerard Depardieu brings little and barely moves at all in this umpteenth filmed adaptation of the famed 1950s French detective. Lifelessly directed, mainly in gloom by veteran Patrice Leconte, the slow-moving, formulaic film is a huge misfire and a failed shot at a noir thriller, something the French are usually so good at.