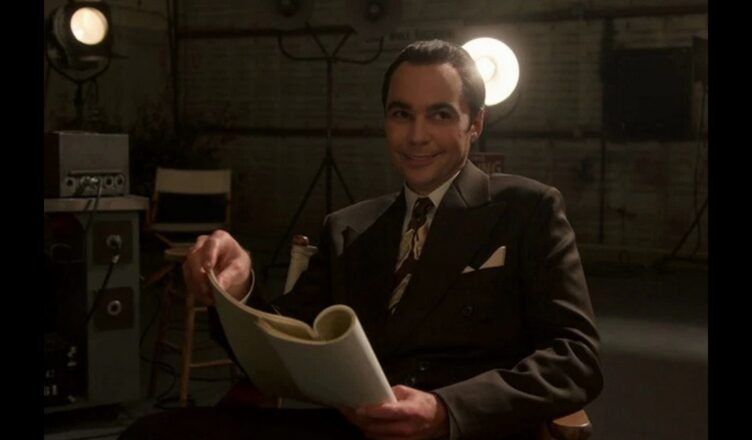 Power player: Jim Parsons puts in an excellent performance in the mini-series ‘Hollywood’.

HOLLYWOOD *** (seven episodes; 350 minutes) MA15+
Hamfisted and melodramatic, naughty, often nasty and definitely over-sexed, Hollywood is an enjoyable, B-grade, adults-only lark with a mission. High gloss and low-brow to a fault, it slowly sinks its hooks into you, despite its bombastic messaging about diversity, its love of cliches and its sporadic lapses in plausibility.

It’s post-war Hollywood and the boom town is a magnet for the young and the stupid of America, all of whom want to be part of the glamour of the movies.

One such dolt is Jack Castello (David Corenswet), a naive, handsome, gym-built young lad fresh from the war and with a pregnant wife to support.

Just one of thousands with the same dream, his initial disappointment is quickly redressed when he meets a fairy godfather-type figure in the form of Ernie West (Dylan McDermott), an enterprising chap who runs a swish service station that specializes in providing male prostitutes to Hollywood’s elite.

Jack is as straight as an arrow and loves his wife, yet quickly discovers the importance of compromise and that sex is the surest way through the gates of Ace Studios.

Much of this is seedy stuff. Portraying old-school Hollywood as a boiling cauldron of favouritism, racism, privilege, blackmail, abuse, corruption and, apparently, more homosexual sex than Caligula indulged on a long weekend, the arc of the series follows the controversial production of a film called Peg, about Peg Entwistle the real-life failed starlet who killed herself by jumping off the Hollywood sign.

Clunky as Hollywood often is – especially in the first episode as Jack enters the fray – the lurid tabloid nature of all the dirty dealings and slippery studio politics admittedly has a certain prurient appeal, though those with an aversion to gay themes will find the proceedings tough going.

Still, there is a noble enterprise coursing beneath all the semi-fictionalized shenanigans, being a very obvious and loudly stated message about diversity in Hollywood.

No room for subtlety here, folks. The series is peppered with scenes where some very progressive, 21st century, pro-diversity, post-#metoo dialogue comes out the mouths of characters who are supposed to be living in the 1940s.

You could get hung up on these obvious flaws. But better to forgive the faults and enjoy the ride.

And the performances are straight from the in-your-face school of acting, offering up some peachy turns: Samara Weaving is great as a beautiful blonde up-and-comer; Rob Reiner chips in as a gruff studio head; but the stand out is The Big Bang Theory’s Jim Parsons as the slimy Henry Willson, a duplicitous agent who takes the young Rock Hudson under his wing, and his sheets.

It’s not classy, to be sure. But it sure is entertaining.