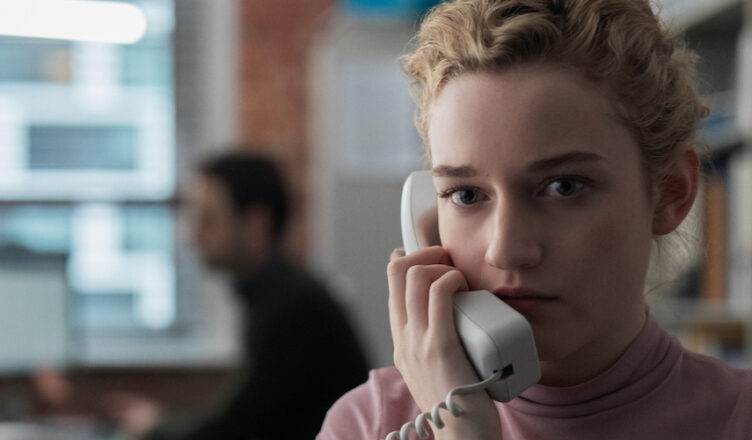 Something to say: Julie Garner plays an office worker who suspects sexual misconduct in Kitty Green’s ‘The Assistant’.

THE ASSISTANT **** (87 minutes) M
There are times when a well-placed whisper can be more effective and compelling than the loudest of shouts. The #metoo drama The Assistant is a perfect case in point.

A quietly powerful, carefully composed film with a lot on its mind, The Assistant tracks the experience over one working day of Jane (Julia Garner from The Ozarks), a young woman freshly hired as a lowly office lackey in the New York office of a huge film company.

Nothing much happens for much of the opening reel as we observe Jane arriving at work pre-dawn and readying the office for the start of business. She dreams of being a producer and moves with the air of somebody who accepts that she is on the bottom rung of the ladder to that goal.

Unassuming to a fault Jane moves through the office like a cypher photocopying scripts, making coffee, getting lunches, cleaning up after meetings. She is barely noticed by her quietly industrious co-workers, save for when she gets a lunch order wrong or is caught snacking on leftovers in the conference room.

Yet the quiet does not denote tranquility. Slowly, we register that all is not OK with Jane. Her long work hours have strained her relationship with her family and her competence is questioned over the phone by her angry boss, an unseen male who provides one of the two loud voices in the film.

She also suspects that all is not OK with her boss. He is off meeting young women in hotel rooms while poor Jane is instructed to make excuses for his absence over the phone to his suspicious, long-suffering wife, the film’s only other loud voice.

Though Jane is not the type to cause a fuss she is unsettled by what she thinks is going on. She raises her concerns with the guy from human resources (Matthew Macfadyen) who lends her a sympathetic ear and, in one of the film’s most prickly scenes, offers her some career advice that reframes her perspective on the world she has just entered.

The Assistant was written and directed by Kitty Green, an award-winning Melbourne-born and trained director who has grandly impressed British and American critics with her debut feature after directing the documentaries Ukraine Is Not A Brothel (2013; AACTA award for Best Feature Documentary) and Casting JonBenet (2017).

Motivated by the fallout of the 2017 Harvey Weinstein sexual assault scandal, Green takes the high road through the thorny terrain, preferring understatement to overstatement, subtlety to bombast.

Trusting in the viewer’s ability to put two and two together, Green synthesizes a host of #metoo issues into June’s singular experience: there are tinges of toxic masculinity; hints of boy’s club solidarity; perceptive glimpses of speech codes, moral complicity and, perhaps most disturbingly, the illusion of confidentiality. Of all the film’s cut-through moments, June’s realization of how porous the company’s cone of silence is ranks as its most unnerving.

As finely honed as the film is nothing would have worked so well without the studied central performance by Julia Garner. She imbues Jane with a locked-down anxiety as she navigates her way in a world dominated by men. In her porcelain face we see the dilemma of a timid person anguished by the possible cost of rocking the boat.

As far as contemporary message movies go, The Assistant is an engrossing drama that deals intelligently with the intricate dynamics of how gross misconduct by corporate masters can continue for so long.

In terms of the way the issue is being dealt with so far, The Assistant clocks in as a film of undoubted daring – though that daring is undoubtedly limited.

Like the film Bombshell and the mini-series The Loudest Voice, The Assistant sets its sights on a very narrow, highly charged band of #metoo issues, making a series of sound points that are beyond any reasonable dispute.

There are, of course, other, arguably darker aspects of the sexual harassment mess that cry to be explored in film.

To wit, one of the ugliest aspects of the Weinstein scandal is how some victims of his harassment took big sums of money in exchange for their silence.

To what degree corporate and legal pressure steered these cases and whether there was something more at work than people merely putting money before principle would surely be rich fodder for a film.

There’s also the issue – addressed, however fleetingly, in Bombshell – of how not speaking out against obscene behaviour at the time it occurs leaves other women unknowingly exposed to similar violations by the same people. Legal agreements keep victims quiet and deepen the sense of entitlement powerful men have to abuse the women in their charge.

Then we have all the issues that erupted during the Brett Kavanaugh/Christine Blasey Ford case.

In plain sight we witnessed a public discourse where the presumption of innocence wrestled with a hardline “believe the victim” mindset. The common-sense notion of testing allegations against evidence was considered by some – not all – feminists as an unspeakable breach of the accuser’s human rights.

That’s hot stuff, yet to date there has only been tepid online natter about a Kavanaugh/Ford film. Come on, Hollywood. What are you scared of?

It is into such morally rocky dramatic terrain that the evolution of the #metoo sub-genre will hopefully develop, teasing out the complexities of such scenarios in the quest for truth and great drama.

Films such as The Assistant mark an important, powerful step in the right direction.