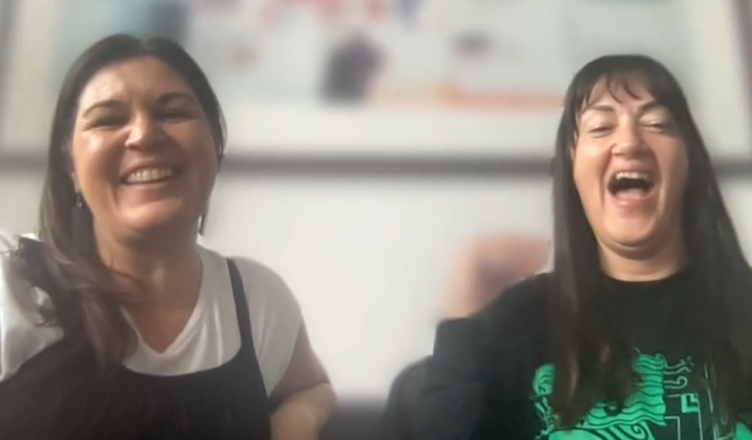 High Spirits: co-directors Ainsley Gardiner (left) and Briar Grace-Smith. Says Gardiner: “There is a hierarchical structure that relies on a single person holding the vision and feeding that vision down to everybody, and that’s not really culturally representative of how we operate in any way, shape or form.”

The New Zealand drama Cousins tells of three Maori cousins whose early friendship is disrupted by social and political forces that leaves them pining for the warmth of family connection.

Based on the 1992 novel by Patricia Smoth, the film was adapted by Briar Grace-Smith, who co-directed the film with Ainsley Gardiner, best known as a producer.

Briar Grace-Smith is one of New Zealand’s most prominent and respected writers, her work across stage, TV and film earning her the Officer of the New Zealand Order of Merit in the 2018 Queen’s Birthday Honours.

That year Ainsley Gardiner’s 20 years as a producer in film and TV was recognized when she became a Member of the New Zealand Order of Merit.

The decision for them to co-direct Cousins lead to an intuitive understanding of how the story should be shaped for the cinema, with an emphasis on performance, pacing and cinematography, drawing on their Maori culture and community.

While the film is somewhat downbeat these women are anything but when in conversation. During their visit to Sydney to launch the film they were kind enough to hit the couch the morning after a preview screening to discuss the film via Skype.

As you’ll see, they are in high spirits, even when discussing tough topics regarding cultural appropriation, entitled storytelling and unconventional filmmaking practices. They don’t even lose their cool when confronting the dreaded Schembri Challenge.

The one point where they do get a tad down-hearted is when reflecting on the differences between the place New Zealand’s First Nations people occupy in society compared to Australia’s indigenous people. What they have to say is sobering.