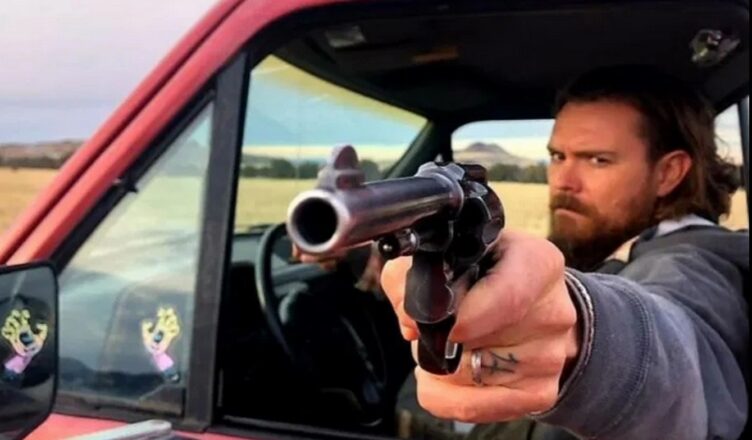 Reaching out: A desperate father fights his inner demons to hold on to his family in ‘The Killing of Two Lovers’.

The Coronavirus might have forced the cancellation of this year’s Melbourne International Film Festival in its traditional form, but in an inspiring example of how limitation can spawn innovation we are blessed with the first online MIFF.

Though the line-up is understandably truncated there is still a wonderfully wide range of films that you can now stream straight into your lounge room, where you will hopefully have set up your home theatre, by far the preferred means to watch anything in the home environment.

For more details about programs and tickets visit https://2020.miff.com.au/

Here now is a quality assortment of some of the more outstanding offerings, including video interviews with Adelaide filmmaker Allison Chhorn (The Plastic House) and the redoubtable Shalini Kantayya (Coded Bias).

So break out the cocktail shaker and happy viewing.

CODED BIAS **** (84 minutes)
The misplaced trust we invest in everyday technology comes in for an exacting, excoriating skewering in Shalini Kantayya’s unsettling documentary about the prejudices embedded in algorithms used for everything from criminal identification to filtering job applicants. 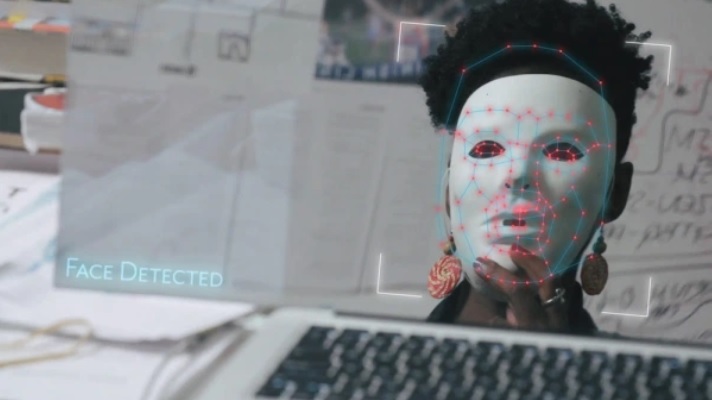 issue, the film details how Big Data has been allowed to operate in a largely unregulated realm, amassing such a frightening volume of information it has managed to rouse bipartisan concern.

Far from being a mere wake-up call, Coded Bias registers how the encroaching digital dystopia has ignited strong grassroots opposition, particularly in regards to facial recognition technology and algorithms used to determine whether somebody needs to be fired.

Director Shalini Kantayya, whose 2015 enviro-documentary Catching the Sun received critical acclaim and political attention, took some time out to speak about the film from her New York office.

THE PLASTIC HOUSE *** (46 minutes)
A lone woman nurses the plants inside a wind-blasted greenhouse, its plastic skin flapping and rustling as she works the soil and tends the shoots quietly and in her own company, save for some abstracted repair men we see either from a distance or through the plastic.

The loss of the woman’s parents is the only explicit clue explaining her ritual, the comfort of routine being the film’s only obvious theme. All else is suggestion in Allison Chhorn’s finely crafted, melancholic film, its evocative sound design and visual stillness arguably qualifying The Plastic House as an ASMR film.

As well as writing, directing and starring, Chhorn also took care of cinematography and editing. Here she speaks about the making and meaning of the film.

THE LETTER *** (81 minutes; subtitled)
The disconnect between technology and culture is brought into stark, distressing relief as an elderly Kenyan woman is accused of witchcraft via Facebook. Her grandson comes to investigate and protect her from death threats, aware that such allegations, though steeped in local lore, are often part of a lethal modern-day scam. Properties owned and cared for by village elders can be taken over by ruthless relatives who kill them after making accusations, usually through threatening letters embellished with crude drawings of machetes. 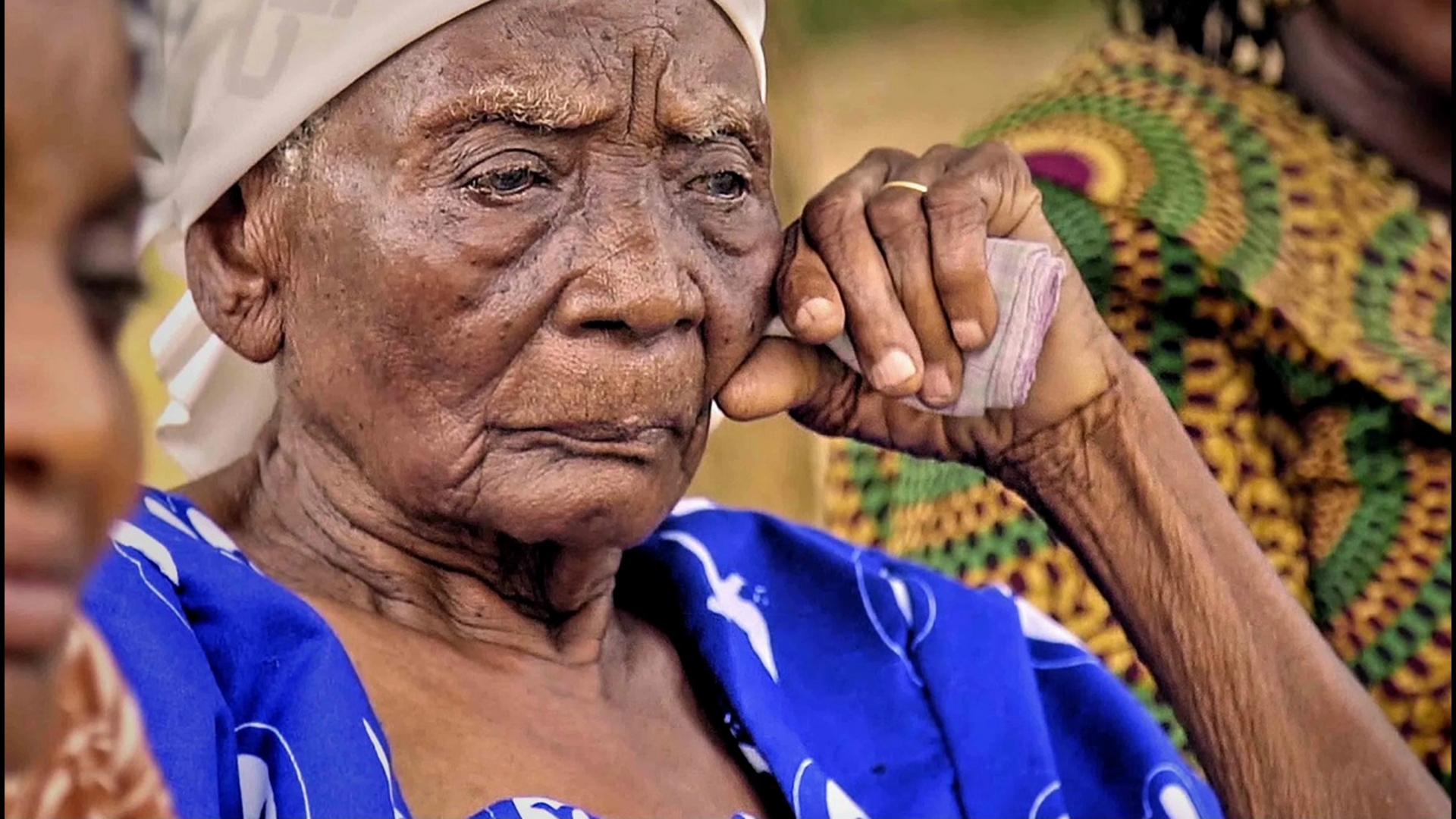 Keeping themselves out of the picture, directors Christopher King and Maia Lekow deliver a prime illustration of how primitive beliefs persist despite all the knowledge made available by digital devices. All the people in the film use smartphones, yet nobody is enlightened by them. Instead they’re used to film the bizarre ritual that might free the God-fearing grandmother of blame for bad crops, financial woes and the lack of rainfall.

It’s an arresting glimpse into the power of priests, the dark side of faith and the resilience of a woman ostracized by her own community, though not by her devoted grandson.

THE KILLING OF TWO LOVERS **** (84 minutes)
Things are finally looking up for David (Clayne Crawford). The painful separation from his wife Nikki (Sepideh Moafi) and four kids shows hints of healing. She’s sending him good vibes during their special “date nights” and the children show they miss him during access visits. Only two things are poisoning the pond; Nikki’s new boyfriend (Chris Coy) and David’s desire to shoot them both as they sleep. 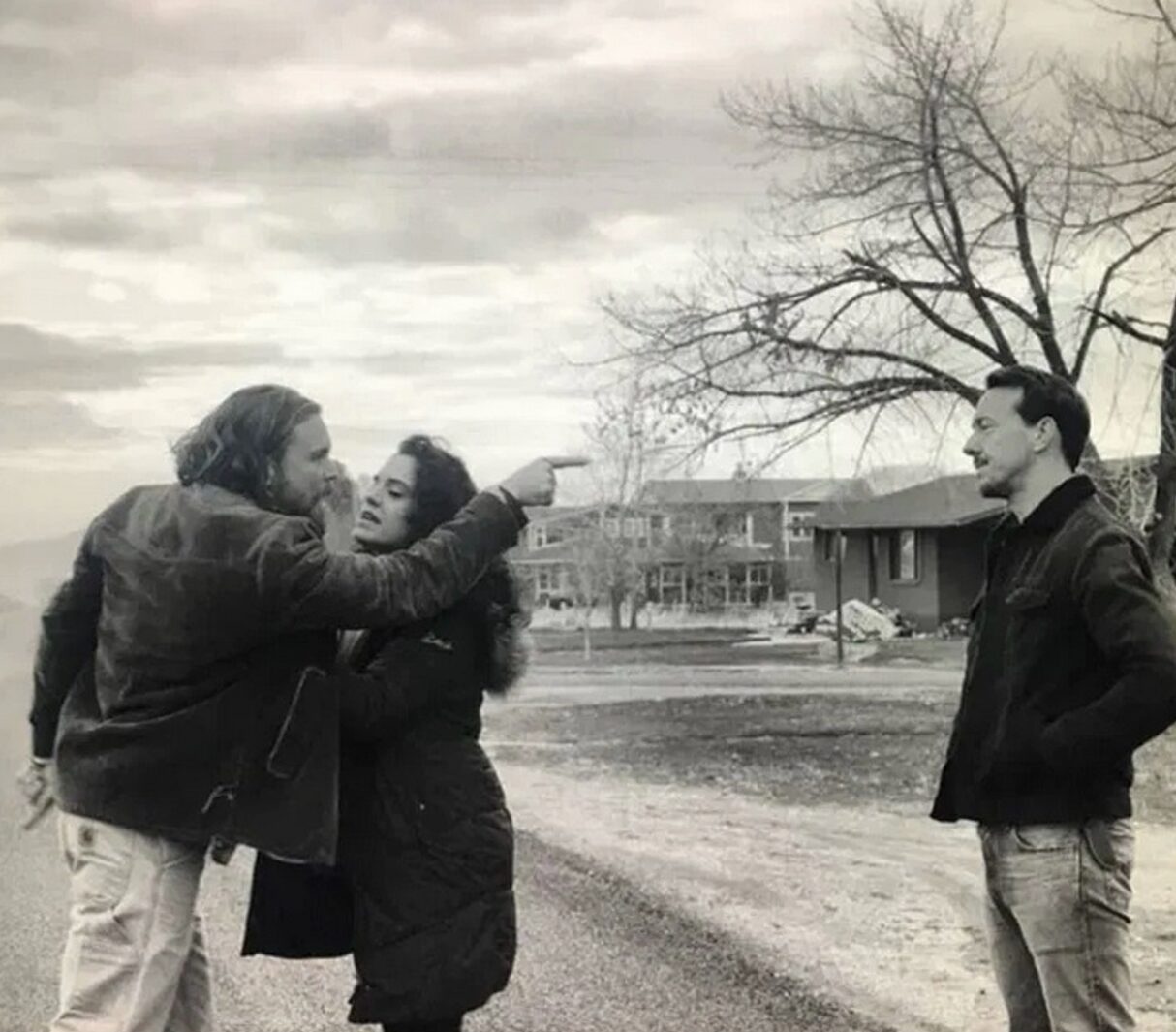 In a terrific, tightly wound performance, Crawford (Riggs from TV’s Lethal Weapon) portrays David as a cauldron of muted rage tempered by the gathering hope that he can reclaim his family.

Deliberately paced and graced with some compelling dialogue exchanges that ooze with authenticity and raw-nerve emotion, The Killing of Two Lovers is an outstanding domestic drama barbed by great sound design, its discordant assemblage of creaks, throbs and thuds suggesting how any fragile moment of harmony or understanding David achieves could suddenly turn bad.

THE MEDDLER ***1/2 (71 minutes; subtitled)
Often putting his life on the line, vigilante video journalist German Cabrera has dedicated himself to chronicling the violence of Guatemala City, a chaotic, under-resourced mess of a metropolis where citizens desperately complain how their calls to the police about crime fall on deaf ears. It’s an unintentional, though perfectly timed backhander to calls demanding “Defund the Police”, something this film exposes as a first-world issue. 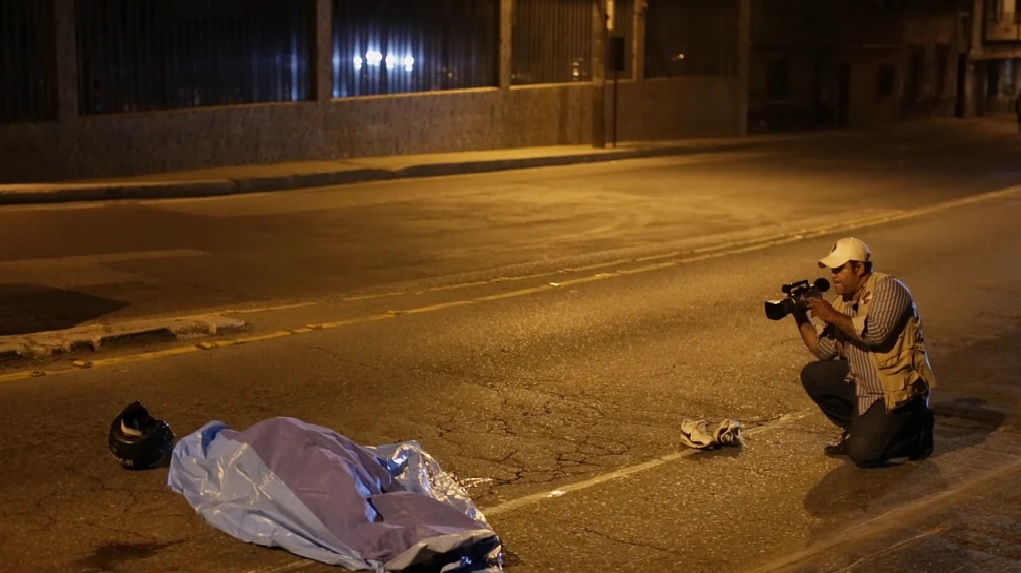 BLOODY NOSE, EMPTY POCKETS ***1/2 (98 minutes)
This cleverly mounted exercise in truth seeking easily qualifies as one of the most inventive and convincing reworkings of the documentary form.

Presenting itself as a visual record of the final night of a doomed Las Vegas dive bar called The Roaring 20s, directors Bill & Turner Ross masterfully choreograph their cameras for a fly-in-the-air effect, making it seem as though we’re eavesdropping on the alcohol-fuelled ruckus as the bar’s regulars drift in for one final session.

“What kind of party is it if an Australian doesn’t take his pants off?” says the bearded barman/father confessor as a large Aussie lad de-trousers. It’s a fitting tone setter. 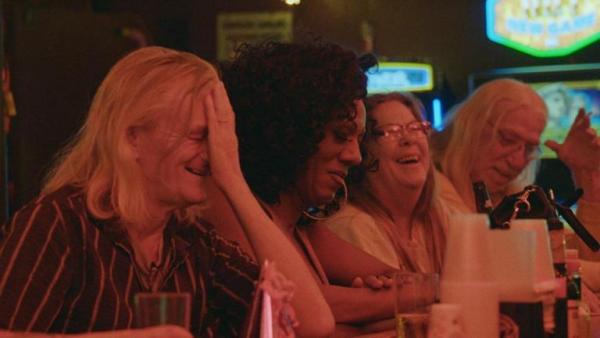 From wrinkled actor Michael Martin comes the film’s most pungent pearl of disaffected wisdom as he explains how proud he is that he failed in life before turning to alcoholism. From another sage comes the life lesson that “a heap see but a few know”, though he has trouble getting the words out.

Actually filmed in a New Orleans bar over several nights with a cast of carefully selected participants recruited from a variety of venues, the film was entirely improvised.

According to the directors the concept was to provide their cast with a space and a loose set of creative parameters, then film the results. This included one shooting session that lasted 18 hours.

Think of Bloody Nose, Empty Pockets as having a fictional framework with documentary content.

It’s a bold endeavour and it works splendidly. Replete with overlapping dialogue, scratchy audio and follow focus, the Ross brothers and their unique cast of oddballs evoke a textured, occasionally tender cinematic sketch of what life is like on that rung on the social ladder just below loser.

ANNE AT 13,000 Ft **** (75 minutes)
What is wrong with this woman? Anne (Deragh Campbell) is an ever-smiling, chirpy child-care centre worker who has a screw loose somewhere. She loves playing with the kids in her charge yet when pressed to act responsibly her gleeful insouciance rubs her colleagues the wrong way. 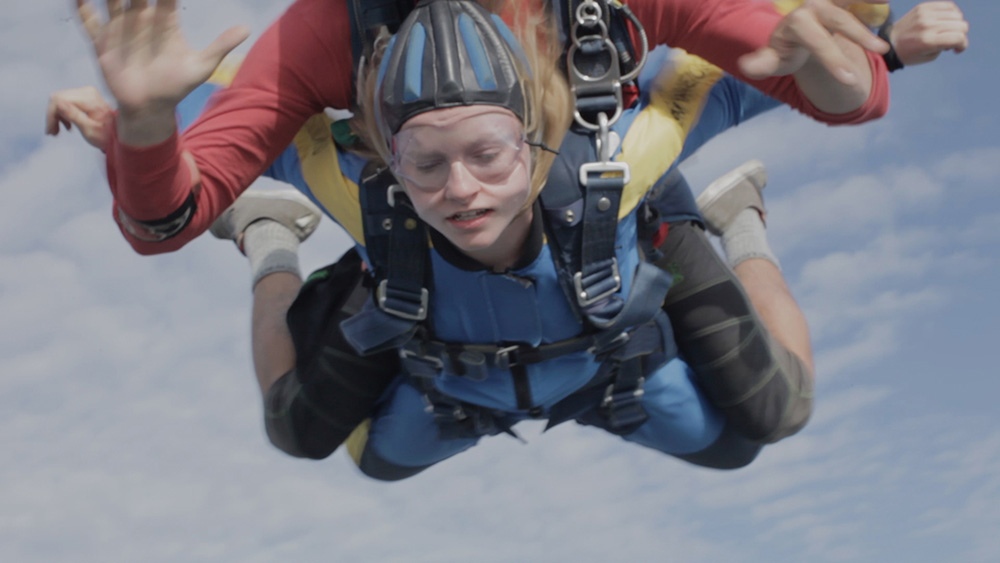 Socially, she slouches beyond being awkward to being outright inept, whether it’s with a guy she met online or taking her prospective boyfriend Matt (Matt Johnson) home to dinner.

She also has a new-found passion for sky-diving, acquired while celebrating the impending marriage of her friend Sarah (Dorothea Paas). Precisely how the desire to jump out of planes – with what appears to be the world’s most irresponsible sky-diving instructors – figures into her thinking is unclear. Is it the cause of her increasingly errant and dangerous behaviour, or the consequence?

Adopting the Ken Loach approach of filming drama like documentary, Canadian writer/director Kazik Radwanski creates a powerful, impressionistic portrait of a young woman on some kind of edge. Often acting as though she is drunk there are hints of alcoholism, but as with the sky-diving, Radwanski refuses to clarify whether it’s the cause of her trouble or a pointer to something far deeper.

Graced by a spiky, naturalistic performance from Campbell, Anne’s puzzled psyche is as confounding as it is mesmerizing, leaving us to wonder what happens to her in the few minutes after the film’s credits begin to roll.

SONGS OF REPRESSION ***1/2 (90 minutes; subtitled)
In an extraordinary, slow-burn expose, the atrocities committed by a German cult in Chile are slowly revealed by directors Estephan Wagner & Marianne Hougen-Moraga as they visit the remote, jungle-bound community and begin exploring the backstories of its inhabitants.

Established by Paul Schafer in 1961 as a supposedly religious enclave, life was defined by violence, rape and rampant child abuse. In the 1970s the “colony” even helped President Pinochet torture and dispose of political prisoners in mass graves. 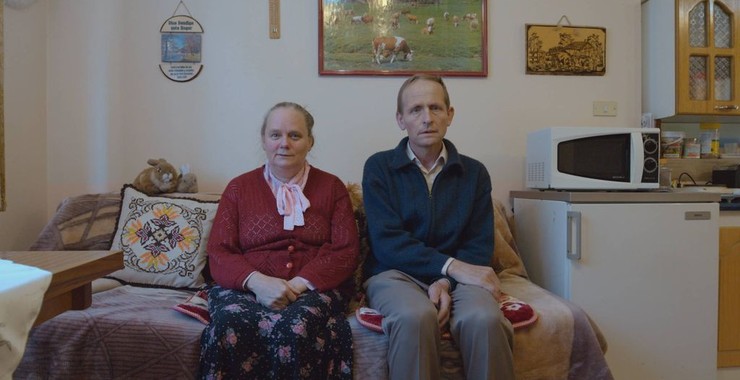 But that was back then and the perpetrators have undergone self-serving “forgiveness” ceremonies that cleanse their consciences and impels everybody to “forgive and forget”.

A series of spine-freezing interviews illustrate how that’s easier said than done as victims voice their long-suppressed disgust and anger to the camera crew, who are increasingly aware that the disapproving eyes of the elders are watching.

With tourists regularly bused in to inspect the place and its dark history, the film offers a compelling, topical case study of how dealing with an horrific past requires more than mere acknowledgement that it happened.

For more details about programs and tickets visit https://2020.miff.com.au/