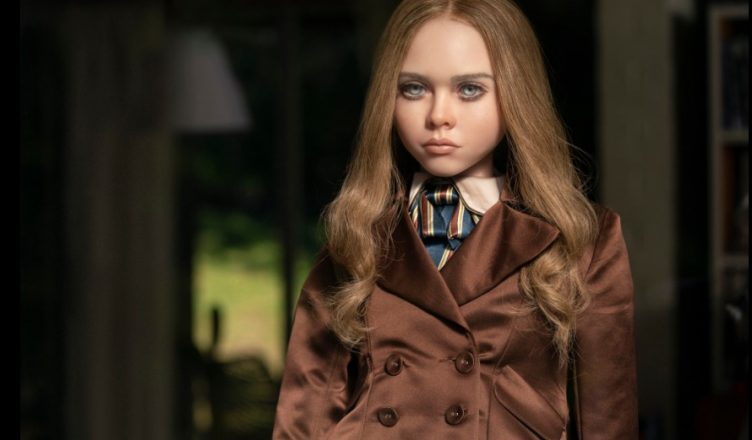 M3GAN *** (102 minutes) M
The rich, century-old cinematic tradition of robots going rogue and making life hell for their masters continues without relent or apology in M3gan, a big slice of cheesy B-grade sci-fi horror schlock that is as enjoyable as it is derivative.

Left without parents after a tragedy, young Cady (Violet McGraw) moves in with her aunt Gemma (Allison Williams), her new robot-obsessed legal guardian.

A tech designer at a big toy factory run by a pushy entrepreneur (Ronny Chieng), Gemma’s been working on a prototype android with advanced machine learning.

Gemma hopes her creation, called Megan, will make the perfect companion for kids who need devoted friends who never complain and are always there to help.

Even though the robot project has been sidelined, Gemma completes it in private and gifts it to Cady, who readily bonds with it. Megan listens to her, talks with her, plays with her and, when the occasion call for it, deals with any people or animals giving Cady a hard time in a very summary manner.

As Megan develops a mind of her own, things become increasingly violent, plopping the film squarely into the splatter genre, alongside the Child’s Play films starring the killer doll Chucky.

It is a bit of a pity how dutifully the film defaults into slasher-movie mode. Its opening innings raises some interesting ideas about our over-reliance on technology and our impulse to embrace alleged innovations and wizz-bang gizmos before all their quirks have been worked out.

Rather than develop these neat ideas, M3gan falls into lockstep with all the many other films that warn us about how any machine designed to think for itself will ultimately turn on people.

Still, the film has some strong, crowd-pleasing moments as Megan seeks to protect Cady. One instance involves a nuisance neighbour, another pays out on a bully who makes the mistake of thinking Megan is a glorified rag doll. Good use of cathartic violence here.

The film is fun, original it ain’t, with nods to a host of Robots Gone Wild films such as Blade Runner, Terminator, Colossus, A.I., the Chucky series and, of course, Fritz Lang’s immortal Metropolis, the film that got the whole sub-genre rolling in 1927.

Footnote: Rather than attend the ususal media preview screening, your humble reviewer saved a lot of time and travel by going to one of the public previews of M3gan on Wednesday night. The cinema was packed and, somewhat surprisingly, there were quite a few young kids in attendance with their parents.

M3gan is an adult film containing violence, swearing, a rape innuendo and quite a bit of blood.

While an MA-rated film requires children (under 15) to be accompanied by an adult, the M rating of this film means any kid can rock up and buy a ticket.

Most kids presumably know the difference between fantasy violence and real violence, thanks chiefly to their heightened exposure to films at home and what we can call the ‘Halloween factor’, which promotes a kid-friendly fantasy version of horror, ghosts and ghouls.

Even given that, the M rating for M3gan seems a bit generous.

There’s something a little unsettling about the idea of an eight-year old kid forking out his pocket money for a ticket to see a film with so much nasty content on their own.

EMILY *** (130 minutes) M
It takes a while for it to get its emotional bearings, but once Emily works through its proto-feminist liberation-through-literature tropes (a la Little Women; My Brilliant Career; Sense and Sensibilitiy, Yentyl etc) it shapes up as an engaging, if far-from-engrossing, take on the formative years of Wuthering Heights author Emily Brontë.

As played by Emma Mackey (Sex Education; Death on the Nile), Emily is a winsome soul eager to escape the picturesque greenery of her creatively stifling rural home, which she shares with sisters Charlotte (Alexandra Dowling) and Anne (Amelia Gething) and with her strict, God-fearing father Patrick (Adrian Dunbar).

What gets the gears turning in the impressive directorial debut from actress Frances O’Connor (A.I.; Mansfield Park; Three Dollars) is Emily’s relationship with her brother Bramwell (Fionn Whitehead, from Dunkirk) and her illicit affair with the tall, handsome new curate in town William Weightman (Oliver Jackson-Cohen).

There’s a tad too much frolicking on the moors and tinkling piano on the soundtrack, but the film firms up as a solid period drama after clearing its early stumbles.

The film is clearly not intended as an historically accurate biopic – even those with a passing familiarity with the Brontë story will pick that up quickly (contrary to the film, Emily absolutely loved where she lived) – but doing a fact check could be a fun way of driving yourself crazy.

For the record, Wuthering Heights was Emily Brontë’s only novel. Sister Charlotte gave us Jane Eyre while the lesser-known Anne wrote Agnes Grey and The Tenant of Wildfell Hall, a renown work credited as one of the first major works of literary feminism. Where’s her movie?

THE AMAZING MAURICE *** 93 minutes PG
Though it doesn’t quite live up to its title, The Amazing Maurice is a sprightly, adult-oriented animated adventure about a large cat called Maurice (voiced by Hugh Laurie) working with a team of rats and a fake pied piper who scam villages by staging rat plagues, then eliminating them.

A wily, self-referential narrator who describes the story while commenting on the narrative’s structure provides some added enjoyment to the lark.

Based on the 2001 children’s book The Amazing Maurice and His Educated Rodents by the late Sir Terry Pratchett, the lark doesn’t seem intended for young kids who might find the plethora of rats frightening. There’s also a rather brutal sequence where trained dogs are dropped into a miniature arena to kill the rats we’ve come to know. The heavy presence of Death, both figuratively and literally, also signals this as an animated jaunt for grown ups rather than impressionable children.