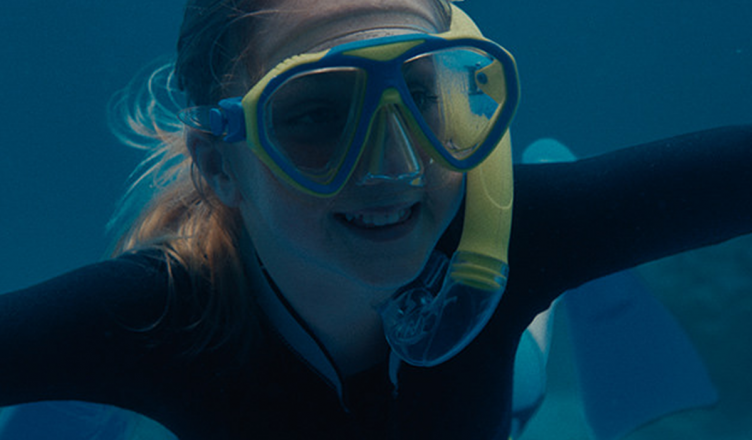 BLUEBACK *½ (103 minutes) PG
In Blueback we witness the life-changing magic of a child bonding with a wild animal, a theme so common in family films there ought to be a warning stamped on the poster.

While exploring the underwater wonders of her local bay with her activist mother Dora (played by Radha Mitchell), young Abby (played by Ariel Donoghue) confronts a big ugly fish called a blue groper (played by a pretty convincing animatronic puppet), whose habitat is being threatened by a proposed development.

Told mostly in flashback as the adult Abby (Mia Wasikowska) visits her elderly, stroke-affected mother (Liz Alexander), the story of the fish and Abby’s fight to protect its home unwinds at a languid pace that is positively soporific.

Void of any tension or excitement, Blueback lacks any sense of adventure, nor is there any real threat posed by the developers who remain largely in the background. The fleeting presence of their frontman, a gent called Costello (Erik Thomson), barely gets a look-in.

Why is this character so thinly drawn and weak? Why do we only hear him from a distance?

Good on the film for having a pro-environment message, but making the story so one-sided simply makes it dull, the sidelining of a character who could have made a blood-boiling villain sapping the supposed conflict between locals and the developers of any grit.

Example: when it comes to addressing the local council, Abby gets to do a long florid speech, complete with her drawings of the local marine life, including one portrait of her fish friend. We don’t get to hear what the developer has to say, or why his proposal is attractive enough to get Abby’s neighbours to sell.

Blueback boasts a hefty creative pedigree; it’s directed by Robert Connolly (Balibo; Paper Planes; The Dry), who co-wrote the screenplay with acclaimed author Tim Winton, whose book the film is based on.

Yet they can’t get the film to fly. Oddly, Blueback just doesn’t move. The West Australian locations are lovely, as are the underwater sequences, but pretty pictures are not enough.

It’s a full 70 minutes before a few scattered plot elements begin to coalesce, yet they don’t add up to anything that creates any real drama.

Even the protest scene on the beach, where placard-waving locals yell at graders and an evil bulldozer – if Avatar taught us anything is that it’s mandatory for all eco-films to have at least one evil bulldozer – doesn’t rouse much passion. Couldn’t one of the developers get into the bulldozer and scoop up some of the protesters, Soylent Green-style, just to liven things up?

That might be going a bit far, but that’s how unengaging the film gets.

Given the anemic year Australian cinema had in 2022, one hoped Blueback, which opened on New Year’s Day, would signal better times ahead, especially given the creative minds behind it.

Here’s an audio version of the Blueback review, read by Rodger, our friendly male robot. Just trying something new.