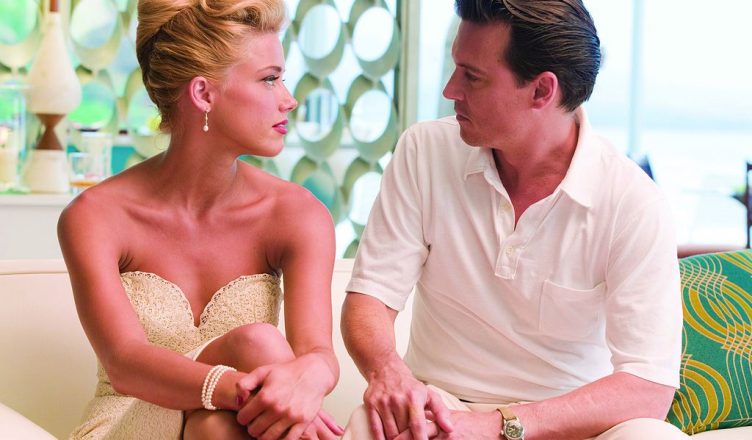 Happier times: Amber Heard and Johnny Depp in ‘The Rum Diary’, the film where they met and fell in love.

As we prepare to uncouple the old year and steam forward on renewable energy towards the new one, here’s a quick skate-through of some of the big news events of 2022 – along with a few of the smaller ones. It’s getting increasingly hard to tell the difference, it seems.

Covid: Pretend as much as we like, but the virus ain’t going anywhere. There’s a lot of denial going on, but if the worsening situation in China is any indication, Covid isn’t done with us yet. If anything, the Word of the Year was Variant, as the virus continues to work its way around our defenses.

War in Ukraine: What was meant to be a quick takeover of Ukraine by Russia – or, more accurately, its president Vladimir Putin – is now heading into a year. The Ukranian forces – and the country’s citizenry – have proved far more resilient and the Russian forces far weaker than expected. The recent upshift in support from the US suggests Ukraine will prevail – but it is proving a costly victory.

The defining image of the war came early on when we saw that footage of a Russian tank swerving to the opposite side of a road to crush a civilian car. The elderly driver somehow survived and joined the fight, aptly symbolizing the nation’s defiant attitude.

We got a clear picture of the attitude the Russian people have for Putin with all the street protests, that TV broadcaster with her anti-war placard and how the response to Putin’s call for men of fighting age to step up was for hundreds of thousands of them to head for the border.

The Afghanistan Mess: The failing nation deserves to be rebranded Basketcase-istan. After 9/11 when the Taliban was booted out of power women were granted equality and rights long denied them. Since the Taliban has returned, guess what? Women have now been stripped of their rights to education, to employment, to freedom of movement. What country hates women more?

Iran. There’s your answer. Incredibly brave Iranian women staged massive protests over the murder of 22-year old law student Mahsa Amini for wearing her headscarf (hijab) too loosely. She was taken away, tortured, fell into coma and died in hospital. Thus far about 470 people have died in the demand for change.

Will 2023 see the end of patriarchal barbarism in Afghanistan and Iran? Here’s hoping it happens, but if it does it’s not something Western Feminists can say they made much noise about. Apparently the patriarchy here in Australia is too big an issue to be distracted from.

America in turmoil: Roe v Wade being overturned by the Supreme Court; the investigation into the Capitol riots of 6 January 2020; more mass shootings. What a trainwreck. The Democrats hold the Senate while Republicans control the House of Representatives. That’ll help. Fasten your seatbelts, folks. It’s going to be a bumpy year.

As for Trump, has the hatred for The Donald ever been so intense? The Democrats – and many Republicans – are petrified of Trump getting back into the Oval Office in 2024. And we’re nearly there.

Oh, Ivanka. Why aren’t you running instead?

The Queen dies at 96: The deep love Australians have for Her Maj was on show wherever you looked and makes nonsense of the never-say-die Republican movement.

As does the success of The Crown. Have you noticed how there’s not a hit TV series about the Australian Republican Movement? Just putting it out there.

Amber Heard: Johnny Depp hit back at Amber’s accusations of sexual assault with a defamation win that saw his fortunes rise and hers plummet. It also took a toll on #metoo with the inconvenient reminder that allegations need to be subjected to due process. Rumours persist that it’s got something to do with the presumption of innocence, a concept continually side-stepped in public discourse today.

Will her career survive? Let’s put it this way: there are a lot of A-list actresses in Hollywood with successful production companies and a lot of power. They could show their support for Amber by, you know, giving her a gig. Let’s see if all the support she got for “speaking out” was lip service, or will translate into more Amber on screen. Here’s to a sequel of London Fields.

The Artemis Moon Mission: Wow. Incredible. How awesome was this event? Space exploration is back on the table – but why wasn’t such an amazing feat bigger news. If only it had been given a tenth of the coverage given to Elon Musk and his takeover of Twitter.

The Lismore Floods: Again, we saw how the Australian community rises in the face of adversity to show what the spirit of altruism is as people risked their lives to help each other. But where was the prompt government support? As we did with the bushfires, we learnt how the bureaucratic stumblebums in office are not worthy of the magnificent community they are supposed to serve.

Elections: Morrison out, Albanese in. One dullard replaces another dullard. In Victoria, Dan Andrews returned with a bigger slice of the electorate, leaving the Liberal party lost in that part of the political wilderness with no wifi.

The Brittany Higgins/Bruce Lehrmann case ends: Juror misconduct caused the case to be rescheduled. This was after a six-month delay caused by Lisa Wilkinson’s idiotic Logies speech, during which somebody should have yelled “sub judice!”. Then all charges against Lehrmann were dropped bringing the matter to an end – of sorts.

What a sorry a spectacle it was. Still, there was a touch of humour, with the funniest line from the mess coming with revelation that Higgins was offered a $325,000 book deal the day after Wilkinson’s husband, author/journalist Peter FitzSimons, offered to broker a publishing deal. Her response to the offer: “I’m blown away, I can absolutely do this…”.

That would probably be anybody’s response to an offer of $325,000 to do anything.

The Rebel Wilson debacle; Sydney Morning Herald editor Bevan Shields and gossip columnist Andrew Hornery embroiled the masthead in a cold shower of global humiliation over the attempt to pressure Rebel Wilson into giving them the story about her new girl/girl relationship. Rather than abide by their 48-hour deadline, Wilson announced the news herself, sending Hornery into a frenzy of impotent rage over being “gazumped”.

The gross mishandling of the affair and the series of defenses, retractions, apologies and embarrassing mea-culpas that followed was crisis management at its worst.

In the recent annual Reader’s Digest ranking of the 30 most trusted professions, doctors were #1, nurses #2, paramedics #3, firefights #4, Scientists #5. Journalists ranked 29th, with politicians at 30. No further comment necessary.

Neighbours ends – sort of After 38 years the iconic Australian soap opera had to close down due to poor ratings. Everybody cried. Then the show was resurrected. Question: Is this healthy? Shouldn’t we learn to let go and just say goodbye?