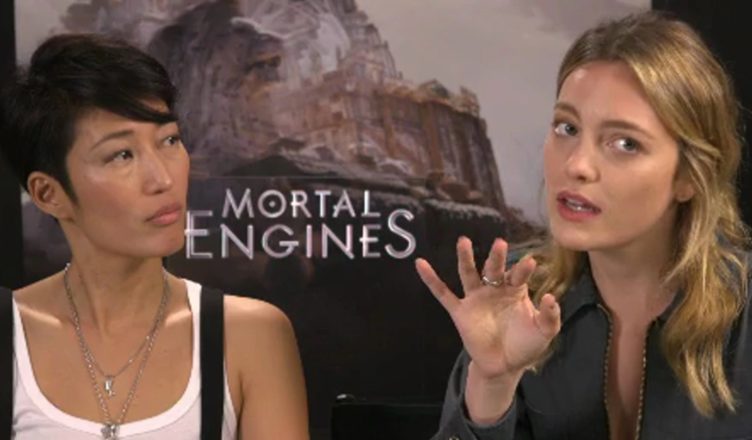 Star Wars on Wheels. That’s essentially what you get with this highly derivative post-apocalyptic epic from the House of Peter Jackson (Lord of the Rings, King Kong, etc).

At some indeterminate time in the far future, cities have been rebuilt on giant tracks so they can move about the landscape, the bigger ones chomping up the smaller ones in an evolutionary process known laughably as “municipal Darwinism”.

Good old London town is one of the most feared predators lumbering around the European landscape as its captain, Thaddeus Valentine (Hugo Weaving), secretly develops a weapon of mass destruction capable of reducing very large things to very small things. (Sound familiar at all?)

Wanting him dead is Hester Shaw (Hera Hilmar), but she soon finds herself on the ground with Tom (Robert Sheehan), a London historian. He learns about the “anti-tractionist” resistance and the compelling reason why Hester wants Thaddeus dead.

Mortal Engines is never dull, to be sure, but for all the claims that the film has visuals you’ve never seen before there is, it must be said, a sense of sameness to it all.

Yes, the scale is extraordinary and the visuals do give all the moving cities, whether on the ground or floatring in the clouds, that gleam of photo-realism.

But you know what? Big things on wheels ain’t nothing new.

We’ve had the giant Jawas transport from Star Wars, the tree chopper in Avatar, the monster machines from The Thunderbirds. Even Monty Python fans will have trouble watching Mortal Engines without thinking of The Meaning of Life and Terry Gilliam’s brilliant short film The Crimson Permanent Assurance, which features a building traversing a post-apocalyptic wasteland (though with sails, not wheels).

Speaking of which, the post-apocalyptic environment of Mortal Engines is loaded with visual cues from other films, from Mad Max to Waterworld to The Road to Terminator. The only genuinely interesting piece of design work is seen in the deep trenches left by the tracks of the city leviathans.

As for the story itself, all the narrative strands quickly coalesce into a retelling of Star Wars. Put bluntly, we’ve already had five films featuring the threat of a giant technological terror (apologies, Lord Vader) with a death beam that can inflict massive destruction. We didn’t need another one.

Really, couldn’t they have thought of something else?

Yet while it’s easy for critics to sit back and mouth off at a film, your humble reviewer has always subscribed to the belief that if you’ve got something critical to say about a film, say it to the people who made it and see what they say. Otherwise, clam up.

During a recent junket in Sydney these critical points were put to actors Leila George and Jihae, as well as to Christian Rivers, the director of Mortal Engines.

In the film Leila George plays the daughter of Thaddeus Valentine. An aspiring actress, she is the daughter of Greta Scacchi and Vincent D’Onofrio. Jihae, who brings a notable degree of Asian cool to Mortal Engines, was born in South Korea and is a New York-based singer and multi-platform artist.