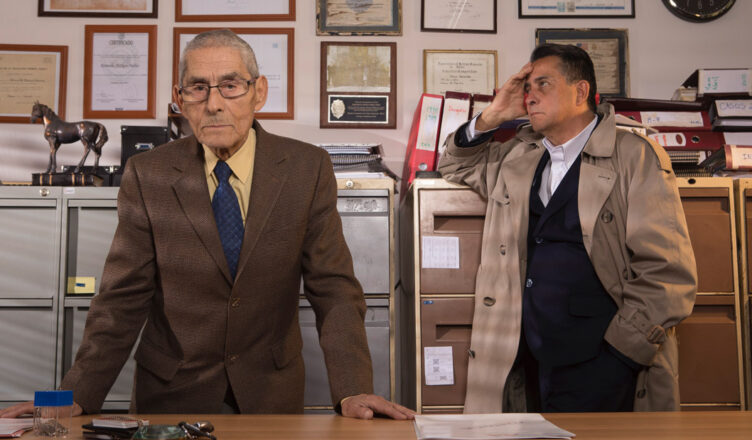 Spy games: An elderly gent is sent by a PI into a nursing home in ‘The Mole Agent’.

THE MOLE AGENT **** (90 minutes; subtitled) G
It’s a fair bet that director Maite Alberdi was expecting to expose something explosive when Chilean private detective Romulo Aitken recruits the elderly Sergio Chamy to move into a nursing home as a spy to investigate claims of elder abuse.

All armed up with a swish mobile phone and secret video cameras hidden inside pens and glasses Sergio checks in to the facility. His instructions are to blend in, befriend the inhabitants and be as inconspicuous as possible as he sniffs around looking for evidence of mistreatment and malpractice.

With a camera crew already present and openly filming, Sergio’s arrival is to be treated casually so he can get on and report back to Romulo at the end of each day.

Integrating into the day-to-day routines of the elderly Chileans, what Sergio uncovers is indeed tragic and sad – but it isn’t the scandalous situation suitable for tabloid headlines anybody was expecting.

Instead, he finds a warm, mutually supportive community composed of lonely people, many of whom are experiencing some form of abandonment or familial neglect.

There are a few whose minds have drifted into spaces beyond reality – one very old woman keeps having phantom phone calls with her long dead mother; the staff play along – but most are vibrant, witty, in dire need of connection and starved of visits from relatives, some of whom never come at all. The amount of succor even a few photos provides illustrates how alone the residents can feel.

As for Sergio himself, he turns into a bit of a star; his subtle interrogations intended to investigate wrong doing are instead seen as gestures of warmth and friendship. His gentlemanly manner even has one long-term resident feeling things she hasn’t felt for the longest time. You can see the joy in her face as she discusses with a staffer the prospect of latter-life love.

Unforced and without any formal narration, director Alberdi fashions a gentle, moving, insightful portrait of people who, for some, appear to have lived too long; the cameras (both overt and covert) capture the robust spirit of elderly folk who feel they have a lot more life left to them than others credit.

UnderstandablyThe Mole Agent was one of the nominees for Best Documentary at this year’s Oscars. A remarkable film.