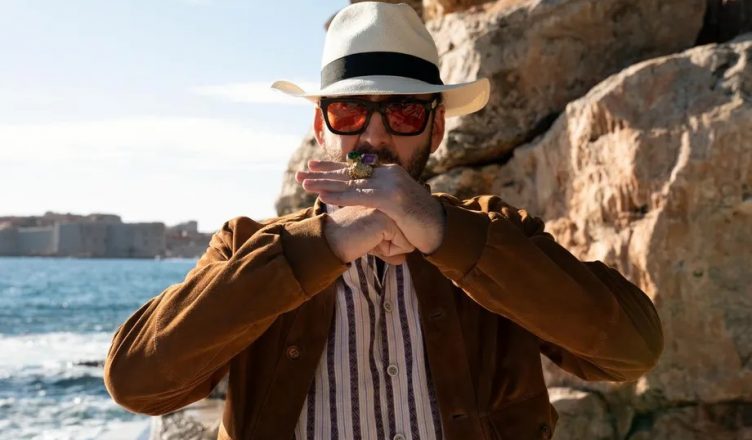 Self portrait: Nicholas Cage stars as himself in ‘The Unbearable Weight of Massive Talent’.

THE UNBEARABLE WEIGHT OF MASSIVE TALENT ** (107 minutes) M
Though it’s being sold as a clever-clever meta-comedy in which Nicholas Cage spoofs himself, the novelty value of The Unbearable Weight of Massive Talent quickly evaporates, turning into a fairly tame, occasionally lame crime-comedy with very little sense of style.

Cage plays a goofball, debt-ridden version of himself called Nick Cage who reluctantly accepts a one million dollar birthday invitation from Javi Gutierre (Pedro Pascal from Game of Thrones), a billionaire fan who lives on a picturesque island.

A stock kidnapping plot kicks in and turns what starts out as a promising, Hollywood-slapping jaunt about celebrity ego and poor career management into a wholly unremarkable action comedy lark.

Try as he might, director/co-writer Tom Gormican (That Awkward Moment, his only other directorial effort) struggles to capitalize on the self-referential premise.

There is a smattering of soft-centred references to a few Cage films (The Rock; Moonstruck), Cage is visited by a younger version of himself and Javi has a museum dedicated to him.

These raise momentary titters but little else. Why doesn’t Cage confront a critic? Or reflect on all the action junk he’s made in the past decade? Or even crack some decent jokes about the business?

Neil Patrick Harris has a good stab as Cage’s lickspittle agent, but he’s consigned to a minor supporting role. What a pity.

Cage has repeatedly proven how funny he can be – inexplicably, the film makes no reference to Cage’s superb meta-comedy Adaptation – yet his performance here is forced and over-amped rather than naturalistic.

So, too, the thin chemistry between him and Pascal. If they wanted to do a buddy comedy, the makers really should have checked out some Billy Wilder films.

Still, love the title. If only the film lived up to its self-mocking cheek.