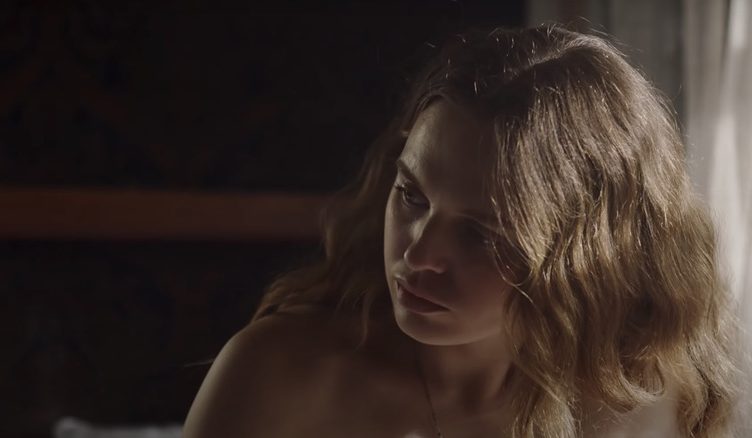 Keeping it in: Odessa Young shines in the period drama ‘Mothering Sunday’.

Young plays Jane Fairchild, a deceptively diffident maid who moves like a cypher through the ornate interiors and emotionally stifled ambience of the huge mansions she finds herself in, either as a silent servant or as the secret long-time lover of her wealthy neighbour Paul Sheringham (Josh O’Connor, yet another handsome young Brit a la Callum Turner and Matt Smith).

The film looks great, with an emphasis on close-ups, drifting, tripod-free cameras and follow focus; performances throughout are strong, with Colin Firth and Olivia Coleman especially good as parents locked in the living nightmare of forever coping with the cost The Great War has exacted on their home.

Still, this is Odessa Young’s film, and easily her most impressive performance thus far. She imbues Jane with an inquisitiveness and a muted radiance that mainly glows when she is either alone, or alone with someone. In one key moment she has to give vent to her feelings without making any noise. It’s a real pearler, a scene for the showreel.

There’s a lot of time jumping in the film, with flashbacks and flash-forwards filling in some backstory and giving the central thread a slightly mysterious quality. While they mostly work fine there are points in the second half where the time-hops get a tad irritating, becoming unnecessary detours from Jane’s increasingly involving narrative.

There’s also plenty of nudity in Mothering Sunday. One could waste time arguing about whether it’s gratuitous if it all wasn’t so pleasant to behold.

Director Eva Husson – working from a screenplay by Alice Birch, adapted from Graham Swift’s 2016 novel – might have some issues with pacing, she can’t be faulted for knowing how to shoot the naked form with a good deal of taste and soft lighting.

LUNANA: A YAK IN THE CLASSROOM **1/2 (109 minutes; subtitled) PG
With a head full of dreams about moving from Bhutan to Australia’s Bondi beach, unmotivated government teacher Ugyen Dorji (Sherab Dorji) reluctantly agrees to run down the final year of his five-year contract in the tiny village of Lunana, host to the most remote school on Earth.

Strictly abiding by the dictates of the genre, his slack attitude is upended once he makes contact with the adoring locals, his nine adorable students and, presumably, the lovely, indisputably adorable high-altitude mountain scenery.

Oscar-nominated at the 2022 awards and the recipient of several festival gongs (including the influential Palm Springs IFF), it’s a likeable, if unremarkable and wholly predictable arthouse jaunt serving up an overly sweet, oft-told affirmation about the importance of teachers.

The film has issues. It takes way too long – about 40 minutes – for Ugyen to actually get to the village and, once there, his attitude reversal occurs way too abruptly and without sufficient detail or exploration.

It’s also a tad bland how the kids are all angels, even the one whose father is an alcoholic, an issue that’s introduced then promptly dropped. So, too, is his supposed addiction to technology, which vanishes once he fails to recharge his iPod classic, which is another odd detail that isn’t explained.

As for the yak action, don’t hold your breath. It’s a full 50 minutes before we see a yak and then another 20 before they become a major part of the story. That’s when Ugyen learns, as we do, how these magnificent, docile beasts bring light into the world.

PIL’S ADVENTURES *** (89 minutes) PG
In a very brisk, action-packed, Pixaresque animated lark from France (thankfully dubbed into English), young Pil, an orphan girl living by her wits on the streets of a medieval kingdom, is drawn into a magic-tinged adventure involving a plot by a slimy stand-in king to thwart the rightful ascendant to the throne.

Written and directed by Julien Fournet, Pil makes for a strong, if reluctant hero in a jaunt full of the kind of colour, movement and brash humour designed to keep kids in their seats and their adult guardians smiling in between mouthfuls of popcorn and checks on their emails.

For what it’s worth, IMDB tells us Pil (as it’s also known) took out the Audience Award for Best Animated Feature for Children at 2022’s Anima, the esteemed Brussels Animation Film Festival. Not too shabby.