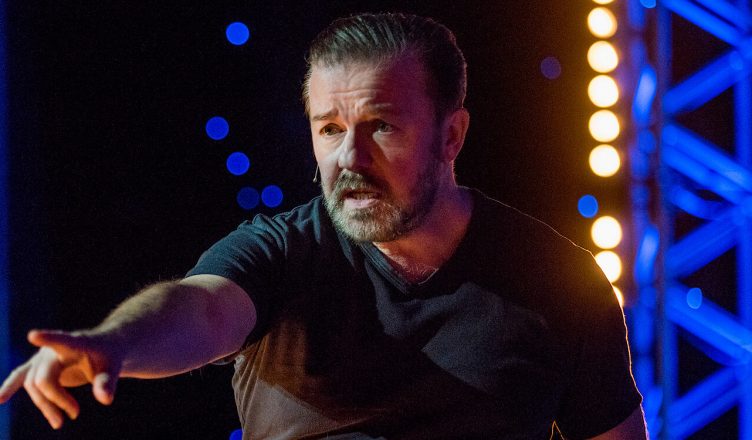 Equally clear is that he’s not doing it for the benefit of the assembled, adoring crowd but for those eager-to-tweet haters waiting to seize upon any opportunity to hold his words against him and accuse him of all sorts of things.

As is his wont, SuperNature does, of course, contain a lot of deeply offensive material. Here, it is chiefly about dogs and their inferiority to cats. That Gervais uses this decades-old comedy cliche as a centrepiece is also likely to offend comedy lovers who consider the trope on the same level as bits about share houses, bad relationships, poor travel experiences and excessive drinking.

Gervais is dux in the school of bad taste comedy, and he now does it with ease as he turns taboo topics inside out, often pushing them to the point of sheer absurdity. Pleasuring himself to enlarged photos of baby Hitler, for example, is hilarious because of its extremity.

Beyond bad taste, though, Gervais revels in courting controversy, not for its own sake but because he has some genuine points to make. In SuperNature he takes on the hot potato du jour – transgender identity – and proves himself an agile and intelligent commentator, as well as a bloody funny one.

He opens the show with a routine about trans people. Not all trans people, but those who subscribe to the doctrine that sexual identity is simply a matter of verbal declaration. He makes fun of that, and of those who fiercely defend the practice, especially when it comes to the use of pronouns. It’s really funny, and on point.

As predictable as the sunrise, these select portions of the show have roused much anger and incited much tub-thumping commentary accusing Gervais of being transphobic and calling for his destruction, among other things. This has now become the copper-plate response from the proponents of cancel culture to anything deemed to be offensive.

Thing is, what Gervais actually says isn’t all that remarkable or outlandish. Indeed, if the reaction from the crowd is any guide, Gervais is merely making an appeal to common sense about how being transgender isn’t – or shouldn’t – merely be a matter of calling yourself a woman. It requires a bit more effort.

Most uproarious – and what has cause much anti-Gervais uproar – are his neo-classic quips about people with beards and penises being recognized as women on their say so. It’s straight-up everyman observational humour with an unambiguous “gimme a break” sentiment.

Wisely, Gervais frames his jokes with the serious comment that he is pro-trans rights, thus making the clear distinction between the transgender community as a whole, which he supports, and that tiny part of it he finds a tad silly and worthy of skewering.

American comedian Dave Chappelle did the same thing in his 2021 special The Closer, devoting the last 15 minutes of the show to Daphne Dorman, a transgender comedian and dear friend of his who committed suicide.

But sorry, no. As we all know by now context, qualification, nuance and balance have no place in the operation of woke culture. The angry response to The Closer showed that. The furious reception to SuperNature has followed very similar contours.

Yet the thunderous outcry against Gervais has a distinctly hollow ring that is even louder. And it sounds suspiciously like the death knell of cancel culture – or at least the first toll.

To put it more crudely, The Closer and SuperNature have dealt a sound one-two punch to wokeism, knocking cancel culture to the canvas, possibly for the count.

In response to The Closer there was fiery discontent among a small number of woke employees at Netflix who railed against the show, demanding that it be removed from the platform, citing allegations of transphobia, hate speech and poor taste.

Backing the movement were a million angry comment pieces attacking Chappelle and deriding Netflix for hosting the show. Even Australian comedian Hannah Gadsby, who has shows on Netflix, added her voice to the fray.

Yet it was for naught. For all the righteous outrage, Netflix stuck to its guns and refused to take the show down, or even issue a content warning for the easily triggered.

Furthermore, in a message to staff, Netflix restated its commitment to artistic freedom and showcasing a wide variety of voices and opinions. Addressing the issue of employees being unhappy about working on programs with views they did not agree with, Netflix sensibly suggested they continue their careers elsewhere. In other words, if you don’t like it here, leave.

The pushback to the woke pressure to shut down Chappelle’s special was a key moment of defiance, and it now casts the almost identical response against Ricky Gervais and SuperNature as a cry into the void, a scream of impotent rage.

The attacks on Netflix over SuperNature are borderline idiotic. Apparently, the company is staining its reputation and neglecting its public duty of care by giving the show a platform.

There’s also a whiff of hypocrisy to the woke rancour. For where are all the attacks on Disney+? After all, it hosts Family Guy, which has been joking about gender identity for years, and far more than either Gervais or Chappelle. Yet the show’s sometimes caustic commentary hasn’t roused equivalent ire. Why not?

Despite the protests, Netflix didn’t take down The Closer so it’s obviously not going to touch SuperNature, especially given how hugely popular it has been, along with the third season of Gervais’ wonderful, touching After Life.

Also, the telling thing with the outcry, and with the tone of much of the largely clueless commentary, is that the affront is not so much about what Gervais says but that he was allowed to say it at all. How dare he.

The principle of free speech remains the albatross around the neck of wokeism and cancel culture – and the albatross is gaining weight fast.

As with Chappelle, the protests against Gervais steadfastly refuse to account for his pro-trans stance. Why? Because it’s too inconvenient and doesn’t serve the cancel culture agenda.

It also highlights a central weakness with WokeThink, which insists that if you support something you must therefore subscribe to a long list of preset beliefs and positions. Criticism and disagreement are not allowed.

What nonsense. The denial of critical thinking at the centre of so much WokeThink is predicated on the notion that the average mind cannot tolerate a nuanced point of view, or a qualification to an opinion. Context is not allowed because it works against the anti-intellectual absolutism WokeThink champions.

It’s as though the quest to tear down anyone who might cause offense to your world view rescinds everything else, including common sense and the principle of civil discourse.

It’s a key point nailed by American comedian and commentator Bill Maher, who quipped in the wake of the Chappelle storm late last year that “I’m not transphobic if I merely disagree with you”. Say, what?

And further: “There isn’t just one true opinion. I’m a free speech guy. Now, I’m Team Dave, but that doesn’t mean I’m anti-trans. We can have two thoughts in our head at the same time.”

Or so you’d think. At least two.

Ricky Gervais: SuperNature is on Netflix. So is Dave Chappelle’s The Closer