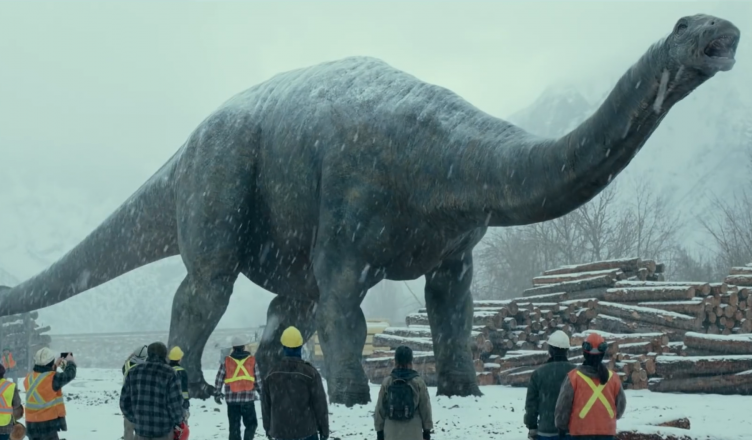 Creature feature: One of the many magnificent beasts in ‘Jurassic World Dominion’.

JURASSIC WORLD DOMINION ****1/2 (147 minutes) M
Hot on the heels of Top Gun: Maverick comes another sterling exemplar from Hollywood about how to do sequels properly.

Just like Top Gun 2 – and the third Star Wars trilogy for that matter – Jurassic World Dominion diligently follows the fairly simple fail-safe formula about how best to deliver maximum customer satisfaction: cater to decades of fandom by harmoniously blending legacy elements of the franchise with all the new-recipe stuff.

Or, put even more simply: show love and respect for the fanbase and it shall reciprocate with bums. Many, many millions of bums.

It’s hard to boil it down, but if one had to identify one quality that makes Jurassic World Dominion such an enthralling, brilliantly made, balls-to-the-wall, mega-sized Bronto-burger of mass-market entertainment it’s that it honours the essence that has defined all the Jurassic films since the game-changing cinematic advent of Steven Spielberg’s Jurassic Park all the way back in 1993.

And that is how, at its heart, it’s basically a cheesy monster movie with class, matinee pulp with polish, a B-grade movie with A-grade production values – though, in this case, you can safely bump that up to an A+.

Cinematographer John Schwartzman and his crew do exceptional work, most notably by shooting the film from realistic, practical camera angles as if the dinosaurs were actually there. The camera even shakes at their footfalls – a brilliant touch we saw in The Lost World. Hence, the lighting throughout is natural and there are no physically impossible camera moves (unlike the type we see in the Marvel franchise, and in Peter Jackson’s King Kong).

Dutifully directed by Colin Trevorrow (he did the first one), the story of JWD is fairly straightforward, designed primarily to serve the film’s many splendid action sequences (remember, this is a B-movie). Still, there is just enough breathing space to sustain some solid dramatic themes.

These chiefly concern corporate malfeasance (a Jurassic mainstay), ethics-vs-technology (another), responsible parenting (and another) and how long you need to hold your breath under water to avoid getting eaten by a giant carnivore with long pointy fangs (that’s a new one).

Set four years after the fun and games of the previous film Jurassic World: Fallen Kingdom (directed by J.A. Bayona), we are shown, via a clever newsy introduction, how dinosaurs are now living not-all-that-harmoniously among humans.

It all looks like a lot of fun (for us, anyway), the only snag being these huge swarms of giant, genetically engineered locusts that are destroying all the crops and threatening the world’s food supply. Or so it seems.

On the case are Ellie Sattler and Alan Grant (Laura Dern and Sam Neill, alumni from JP1) whose investigations take them to the giant genetics corporation Biosyn – no clues in the name, of course – which is run by techno-titan Lewis Dodgson (Campbell Scott).

Working there as a lecturer for the company’s staff is preachy-pants chaotician Ian Malcolm (Jeff Goldblum, also from JP1) who is still going on about ethics, science, technology and corporate responsibility and the consequences of them not being in sync.

Running parallel to the monster locust story is the hunting down of young Isabella (Maisie Lockwood), a cloned teenager whose de facto parents Owen and Claire (Chris Pratt & Bryce Dallas Howard from the new-recipe Jurassic films) are trying to protect her from people who want to use her for their own ends.

Eventually, inevitably, these story threats collide, resulting in a fabulous, extended third act involving much running and hiding from dinosaurs, with Claire having to hide from a nasty dinosaur by quietly crawling into a lake without the benefit of an aqua lung.

Fondly recalling how the original Jurassic Park had a scant 12 minutes of actual dinosaur action, Jurassic World Dominion is essentially a procession of elongated, magnificently mounted action sequences broken up by a few scenes to crowbar the story in.

It’s hard to choose, but probably the film’s standout sequence, pound-for-pound, is a chase across the rooftops and narrow laneways of Malta (where much of the film was shot). Anyone who thinks it resembles a steroid-pumped Bourne movie will be thrilled at the fleeting vision of a velociraptor replicating the famous leap-into-the-window moment from Ultimatum. It’s a killer moment from a killer sequence that’ll make you give thanks you lived long enough to witness it. No exaggeration.

All that really matters, of course, is whether the dinosaurs look real and, boy, do they. One could go on and on in intricate exaltation, gushing about how uncannily photo-realistic they all look – and, let’s face it, the term “photo-realistic” came into common usage to describe the quality of the visual effects work that has continuously set new standards across the Jurassic canon.

Yet, the measure of just how exacting the detail is here can be taken from one non-action scene where a giant dinosaur is being lead through the snow. As it slowly stomps away from the camera you can see the snow that has stuck to the undersides of its feet.

It’s one of those tiny details you’re only supposed to register with your peripheral vision while focusing on the centre of attention, yet it’s precisely the kind of small-picture detail that makes the big picture feel so authentic.

The film brims with that degree of excellence and VFX connoisseurs – especially those who have closely followed the evolution of the art ever since we dived into the Death Star trench in Star Wars – will get joyously drunk on the offerings here, mostly produced by Industrial Light & Magic, the outfit George Lucas created for the original Star Wars and which pioneered CGI for the original Jurassic Park.

Though most the film is played with a straight face, there’s are plenty of small, affectionate laughs to be had; Goldblum joking about not liking Jurassic World much; minor characters delivering crucial slabs of exposition in a few quick seconds; the gloriously cliched, big-movie mystery of why a vast, beautifully designed, high-tech facility has the security protocols of a back-country convenience store.

Above all, you can’t help but smile at the sight of the original cast members sharing the frame. Here’s a film essentially about preservation, and there they all are, looking very well-preserved indeed. And, please, that’s intended as a nice remark; Dern, Goldblum and Neill are 55, 69 and 74 respectively and they never creak once.

Are there flaws in the film? Of course there are.

As good as Chris Pratt is here as the action-oriented behavioural expert who can instantly tame a vicious velociraptor by pointing his hand at it while looking into its eyes, was there an opportunity missed? He was so funny as the klutzy Andy in Parks and Recreation, couldn’t they make just one Jurassic film with Pratt as Andy?

It’s just an idea for future films in the franchise, which will continue regardless of JWD being the closing chapter of this trilogy.

The main bugbear in Jurassic World Dominion, however, is that despite dinosaurs now being an admittedly awkward part of everyday life, they’re not part of the human diet. You know, like on The Flintstones with the Bronto-burgers and giant ribs.

There surely should have been mention of domesticating and cultivating these giant creatures for culinary purposes. Perhaps we could one day see Jurassic Farm or, better still, Jurassic Lunch. Imagine the size of a dino-kebab, or a stegosaurus-sandwich, or what the McDonald’s menu would be like. Filet O Pterodactyl, anyone?

Sorry. Just being silly. Still saturated with high spirits after seeing the film. Can’t wait to see it again.

Footnote: As thrilling, fun and enjoyable as Jurassic World Dominion is, it is important while ingesting the extravaganza to acknowledge Michael Crichton, whose visionary 1990 novel Jurassic Park set the ball rolling. A prolific sci-fi writer, he was also a noted film director (Runaway, Coma; Westworld), TV producer (ER) and social commentator. He died of lymphoma in 2008, age 66.