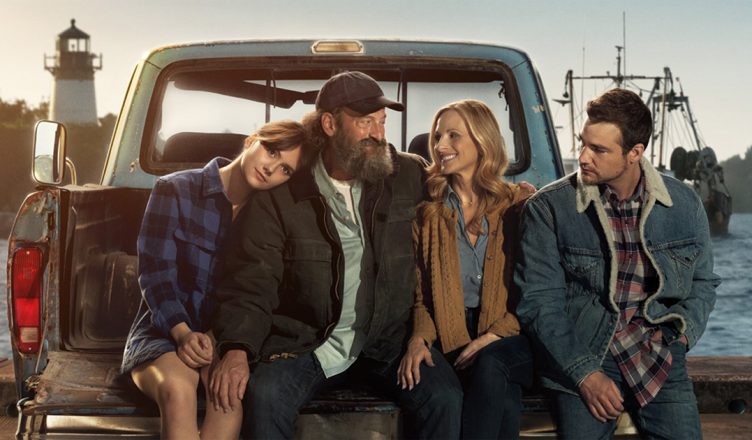 Long shot: The odds are against it, yet low-budget drama ‘Coda’ could deliver an upset.

There are lots of grand, attention-grabbing cinematic qualities lining the strong-than-usual roster of films vying for the 94th Academy Awards.

Yet amidst the scale, sweep and characteristic bombast of so many high-flying films in the line-up, perhaps the most touching moment in any of them comes in a simple moment between a father and daughter that takes place in the back of a ute parked in the backyard of their humble home.

In it deaf fisherman Frank (Troy Kotsur) makes a long-overdue, life-altering connection with daughter Ruby (Emilia Jones), the only member of the family who can hear.

Working on the family trawler as well as attending high school, she long served as their interpreter. Fed up with being so relied upon she wants to be allowed to break free and go to music school.

Against the heft of high-profile, award-hungry contenders such as The Power of the Dog (12 nominations), West Side Story (seven), Dune (10), Belfast (7) and King Richard (6), CODA – meaning Child Of Deaf Adults – seems like small potatoes.

With a mere three nominations – Best Film, Supporting Actor, Adapted Screenplay – it’s a small, low-budget film with an outside chance.

Yet, truth be told, CODA’s simple story about a put-upon teen girl wanting to make her own way in the world is the most human and relatable of the lot. That Jones didn’t crack a nomination is as big a snub as any of the others this year.

Beautifully directed by Sian Heder, who adapted the film from the 2014 French film La Famille Bélier (Philippe Rousselet produced both), it’s not a film of bells and whistles and over-played emotions but one that tells a contemporary grass-roots drama about real people facing real-life strife.

So, even without a Best Director nod for Heder or a Best Actress tip for Jones – both omissions as incongruous as any of the House of Gucci “snubs” – its warmth, universal acclaim and modesty could see it cut through and provide a major upset by taking Best Film. It certainly deserves it.

It will hopefully take a Best Screenplay award for Heder and will definitely take Best Supporting Actor for Kotsur, who has already nabbed a BAFTA, a Screen Actors Guild gong and a Critics’ Choice Award. He’s the first deaf actor to do so and, judging from his all-embracing BAFTA acceptance speech, probably won’t be the last.

So, good news for him, not so good for worthy nominees Ciarán Hinds (Belfast) and J. K. Simmons (Being the Ricardos), and not-so-worthy nominees Jesse Plemons and Kodi Smit-McPhee, who both essentially walk and murmur their way through The Power of the Dog.

Whoa! What was that? A double diss to the most nominated film? Let’s deal with that elephant now.

The 12 nominations for The Power of the Dog puts Australian film lovers in an awkward position.

It would, of course, be wonderful to see the Australia-New Zealand co-production sweep the Oscars, thus affirming how the filmmaking talent of both countries punch well above their weight on the global stage.

Yet for all its acclaim The Power of the Dog is a resoundingly dull film.

Set in Montana in 1925 it’s a bleak, ultra-slow western where nothing of much interest happens between a rough-as-guts ranch worker (Benedict Cumberbatch, tipped for Best Actor), his prim brother (Plemons), his wife (Kirsten Dunst, nommed for Best Supporting Actress) and her fish-out-of-water son (Smit-McPhee).

Shot entirely in New Zealand, the film certainly looks great – cinematographer Ari Wegner is up for a bug crusher – but the film’s thin story has the substance of a vapour trail.

There’s a vague dalliance with repressed homosexuality – an age-old, over-used theme surely worthy of cliche status – but, damn, the thing moves at a glacial pace with performances that are barely there thanks to Jane Campion’s stately, airy, less-is-less direction.

Her much-favoured nomination for Best Director will hopefully lose out to Steven Spielberg for his splendid remake of West Side Story, pipping Paul Thomas Anderson for Licorice Pizza, Kenneth Branagh for Belfast and Ryusuke Hamaguchi for Drive My Car.

Don’t cry for Hamaguchi, though; his absorbing, three-hour drama about love, fidelity and friendship will easily takes out Best International Feature Film.

Easily the most interesting and hotly-contested category this year is Best Actress as Jessica Chastain (The Eyes of Tammy Faye) hopes for scale-tipping favour over the other hot favourite Kristen Stewart (Spencer) whose remarkable performance as the doomed Diana, Princess of Wales lifted an otherwise mediocre movie.

Also up: Olivia Colman (unremarkable in The Lost Daughter); Penélope Cruz (Parallel Mothers); and the ever-versatile Nicole Kidman (so good as Lucille Ball in Being the Ricardos).

For Best Supporting actress, count on Ariana DeBose to win for West Side Story, though it’ll be a slim margin over the great work Aunjanue Ellis put into the no-nonsense mother in King Richard. Also nominated: Jessie Buckley (The Lost Daughter); Judi Dench (quite wonderful in Belfast) and Kirsten Dunst (not so wonderful in The Power of the Dog).

Best Actor will go to Will Smith for King Richard, narrowly beating strong contention from Javier Bardem (terrific in Being the Ricardos); Andrew Garfield (Tick, Tick… Boom!; he should have instead been up for his top work in Tammy Faye); and Denzel Washington (The Tragedy of Macbeth). Sterling work from all of them.

Also nominated in this category is Benedict Cumberbatch (The Power of the Dog).

As for Best Film, to labour the point once again, we’d all love to see CODA upset the apple cart, but without a Best Director nomination, the odds aren’t pretty given it’s only happened five times in Oscar history.

The most recent instance was in 2018 with Peter Farrelly’s Green Book. Before that was 2012 with Ben Affleck and Argo, then – most famously – in 1989 with Bruce Beresford and Driving Miss Daisy. (“The movie that apparently directed itself,” quipped host Billy Crystal in 1990.) For the other two instances we need to skip back more than half a century to 1932 for Edmund Goulding’s Grand Hotel (1932) and William A. Wellman’s Wings in 1928).

The more realistic prayer is that West Side Story will trump Power of the Dog, the favourite. The magnificent sci-fi epic Dune would have been a stronger contender had director Denis Villeneuve scored a nod.

Also up are worthy contenders Belfast, Drive My Car, and Licorice Pizza and outside chances King Richard and Nightmare Alley.

That the sprawling, occasionally funny but messy semi-satire Don’t Look Up is up for Best Film is something we can chalk up as one of those awkward anomalies that always find their way into the Oscar nominations list.

Certainly, one of the major changes that has seeped into the Oscars over the past few years has been the growing presence of films designed primarily for the stream rather than the cinema.

That evolutionary step is at its most pronounced this year, probably due to the huge rise in power and profile of home streaming services such as Netflix, Amazon Prime, Disney+, Paramount, Apple and so forth.

Having gotten deep into production, these titans have established a new release pattern for their films wherein the debut in the stream is preceded by a brief cinema run designed to qualify the film for award contention.

Major streaming event films nominated for Oscars this year include Being the Ricardos, The Power of the Dog, The Lost Daughter, Tick, Tick…Boom and the aforementioned Don’t Look Up.

As we can see with this year’s line-up, more and more Oscar-nominated films will in essence be home market films. No doubt Covid has its fingerprints all over this, but it accelerated the change rather than initiate it.

There’s no major sign yet that Oscar films will become progressively less cinematic, being produced and directed with home consumption front of mind.

Still, the prominence at the Oscars of such a so-so streaming film as Don’t Look Up is cause for concern.

Now, Big Question: the viewership of the Oscars ceremony has been plummeting since 2015, signalling that normal people care less and less about them.

This is partly put down to the infiltration of “woke” agendas such as diversity, #metoo, #OscarsSoWhite, etc. Also, the absence of popular films from contention limits mainstream interest, especially when the top awards go to films with tiny audiences.

That an arthouse film has yet again dominated so much awards attention this year is unlikely to redress Oscar’s dwindling relevance to an increasingly uninterested public.

Indeed, the clumsiness now baked into the Oscars presentation continues with renewed cluelessness.

In arguably the stupidest decision on Oscars history, there’s been an attempt to tighten the ceremony by having a swag of eight production awards given before the thing goes to air.

Not mentioned in the letter, probably due to oversight, is that the decision is completely hypocritical, grinding against the much touted ethos of inclusion the Oscars is so desperate, and so under pressure, to promote.

Here’s one way to drastically shorten the running time of the ceremony: cut out the walks to the podium. Have winners accept their awards at their seats, their speeches captured by a roaming camera.

Perhaps Best Film could be the exception, but each award announcement eats up so much time with all that walking and hand-shaking and clapping.

And do we really need to hear all those songs?

We’ll keep a close track on the ceremony, then do a debrief later in the week once all the figures are in.

In the meantime – get into it.

The Oscars can be seen from 11am, Monday 28 March on Channel Seven and streamed on 7plus. All free, of course.