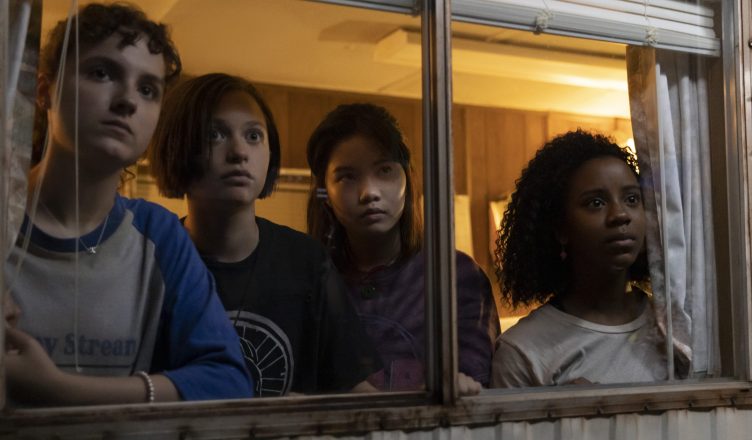 Fab four: A quartet of friends travel in time in ‘Paper Girls’

PAPER GIRLS **1/2 (eight episodes; five hours, 54 minutes) M
whole series review
For sure, there’s a lot going on across the eight episodes of the so-so sci-fi series Paper Girls as four teenage girls are inexplicably zapped from 1988 to 2019. Yet it’s a leisurely paced time-travel adventure that simmers rather than boils, with plenty of meandering detours and quite a bit of rambling.

The first two episodes feature some pretty ordinary, cluttered direction as we follow Tiffany (Camryn Jones), KJ (Fina Strazza), Erin (Riley Lai Nelet) and Mac (Sofia Rosinsky) from their suburban paper routes in 1988 to 2019, where they find themselves being shot at.

What’s going on, and with all due respect to the impact of The Terminator, is that one band of time-travelling rebel soldiers are attempting to alter history and so prevent the rise of a dictatorial government that, of course, has its own squad of time-travelling soldiers trying to stop them.

Gotta say, the performances from the central quartet improve a great deal once the story finds its feet and we get into the meat and potatoes of what’s going on with all the time travel.

Based on the graphic novel by Brian K. Vaughan, who also serves as a producer, Paper Girls is mildly engaging but far from compelling, with too many examples of where tighter storytelling would have heightened the tension as the girls risk all as they try finding their way back home to the pre-digital comforts of 1988.

And while there is some pulpy sci-fi appeal with all the chasing, firefights, time warps and giant robots – even the girls recognize the cliché, jokingly calling them “transformers” – the most engaging parts of the story is when the girls see, and sometimes meet, the older versions of themselves.

If only there was more of that and less of the time-travel twaddle. But there is hope, for as the final scenes of Paper Girls make clear, the feisty foursome aren’t done yet.

As far as cliffhangers go, and to give the show its due, it’s not half bad and a sufficiently enticing teaser for what is to come.