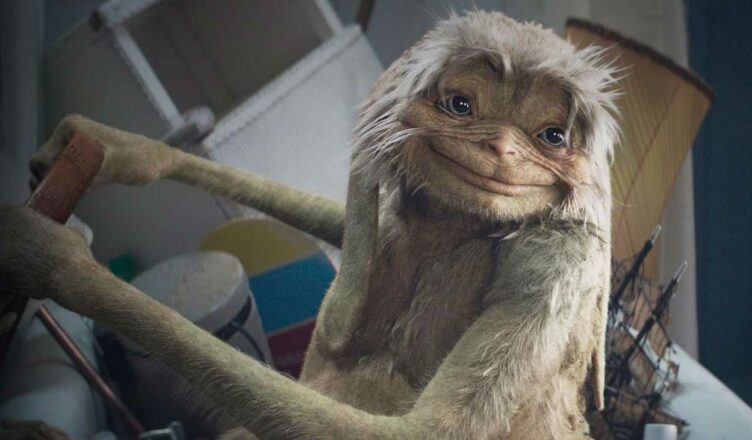 Get off my sand: Michael Caine provides the voice to the mythical Psammead creature in ‘Four Kids and It’.

FOUR KIDS AND IT **1/2 (110 minutes) PG
The age-old adage about not wishing too hard for what you want serves as the cautionary theme in a reasonably enjoyable, largely forgettable British kid’s fantasy lark.

Single parents David and Alice (top talents Matthew Goode and Paula Patton, mostly wasted here) attempt to introduce their children to the idea of being a family by treating them to a holiday at the beach, but it doesn’t go well.

David’s daughter Ros (Teddie-Rose Malleson-Allen) is a prim, bookish gal while Alice’s unruly girl Smash (Ashley Aufderheide) hates her new British homeland. Each pine for the return of the absent parent – David’s wife is “finding herself” in academia; Alice’s husband is with a much younger woman – and resents the idea of being part of some wholesome blended family.

While on an unpleasant walk with their younger siblings they discover a secret entrance that leads to a hidden beach where lives the Psammead (pron: sami-ud), a long-armed, chimp-like creature that dwells in the sand and has loads of Cockney charm, thanks to the voicework of Michael Caine.

The critter has the limited magical power of granting one wish per day, with the caveat that the wish only lasts until sunset. It’s a neat fantasy device that lets the kids indulge in dreams of fame, time travel, flying and super-powers.

All the while a local rich eccentric called Tristan Trent (Russell Brand) is engaged in a hunt for the Psammead that began with his grandfather.

There’s some delight in the fluid digital rendering of the Psammead and in Brand’s sparky performance, and the takeaway message about accepting change is worth its weight in smelted aluminium. But, boy, the film sure takes its time.

Though the FX segments click nicely, director Andy De Emmony (a comedy specialist who has worked on Spitting Image, Father Ted and Red Dwarf) moves things at a languid pace.

Too much time is spent trying to draw laughs from things that are not funny – Alice’s inability to cook; the lack of decent phone reception – and not enough on things that are, most notably Brand and his acidic wit. The film could have done with a lot more humour to keep adults engaged.

Annoying, too, is the film’s extended ET-like sequence – at times it feels like ET Goes to the Beach – and the gaping story hole that sees a giant mechanical excavator on the Psammead’s secluded sands. Huh? If the place is only accessible by the secret passage, how the heck did such a monstrous, heavy contraption get there?

That’s not nit-picking. If you’re going to take so long to tell a kids’ story such things will stick out.

While the film is based on a novel by Jacqueline Wilson, she sourced her story from the classic 1902 book by E. Nesbit Five Children and It where the Psammead made its first appearance. The lineage is duly acknowledged in the film, presumably for purists of British children’s literature who would otherwise scream out with indignant rage.