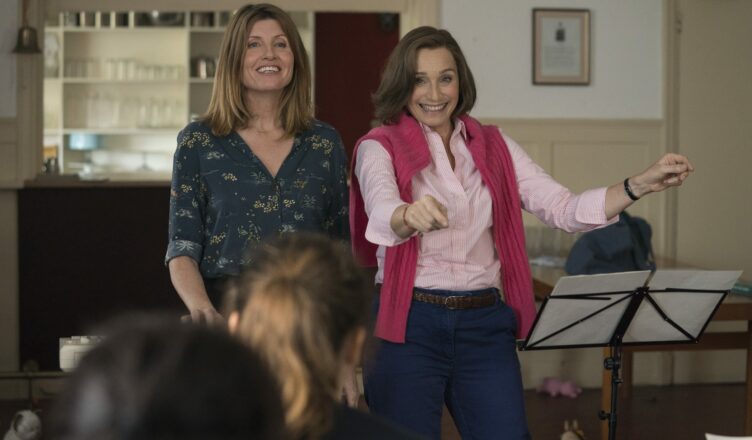 MILITARY WIVES *** (112 minutes) M
Here’s a pretty strong example of how the end can justify the means – or in other words, that a sensational finale can absolve the cinematic sins that lead to it.

Inspired by a real story, Military Wives is a spirited flag-waving comedy-drama about a choir that was formed by the spouses of British soldiers while they were away are on tour – that is, fighting – in Afghanistan.

Two wives, Kate (Kristin Scott Thomas) and Lisa (Sharon Horgan, in an especially strong turn), lead the charge to lift the morale of the othwer women in their army base suburb and get the choir off the ground.

In a film unapologetically dedicated to the celebration of good old British pluck there’s not a cliche or easy appeal for emotion that isn’t tapped by a story that is so predictable you could set your watch by it.

But you know what? It all works. Director Peter Cattaneo, best known for the classic British comedy The Full Monty, proves here how cliches can work wonderfully, so long as they’re honed, polished, properly arranged and delivered with sincerity.

The film certainly has no shortage of that, given its salute to those who serve and sacrifice in wars both popular and otherwise.

It is, of course, easy to fault the film for not being more daring or original, yet for all its predictable pit stops, the film ultimately comes through with a final choir performance composed of lines lifted from letters written by the women to their husbands.

It’s quite a moment, and it’s difficult to imagine even the hardest of hearts not responding to this beautifully staged scene with either a tear or a tingle up the back of the neck.

The true story that inspired the film ignited scores of similar choirs within the British military community, forming a charity that focuses on the needs of those in service. The film certainly serves as a fitting tribute, though it must be stressed that Military Wives is not a docudrama as its colourful tale sports but a hazy resemblance to the actual formation of the original choir.

As a straight-up piece of entertainment, Military Wives would be a strong recommendation in normal times – but these are not normal times we are living in, thanks to the ever-ballooning spectre of the coronavirus.

Thus, in the present environment where panic over pandemics and tussles over toilet paper seem to be dominating daily life and mainstream media attention, Military Wives is especially welcome, brandishing an uplifting, reassuring vibe and a story of people giving their all for the sake of other people.

Ahh, unselfishness. Remember when that was a thing all those weeks ago?

Indeed, Military Wives could turn out to be the right film at the right time – provided, of course, that people aren’t paranoid about catching something when they go to the cinema.