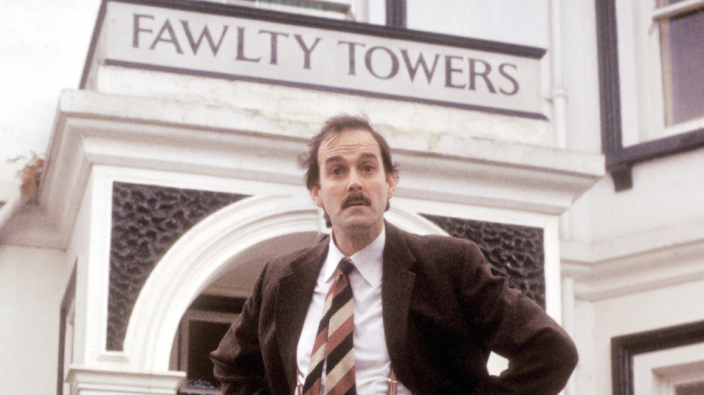 Problem?: The storm over a 45-year old episode of ‘Fawlty Towers’ hit a tipping point.

CAUTION: This article contains material that some people might consider offensive.

Over the past week we’ve been witnessing a distressing purge of pop culture in the wake of the global Black Lives Matter protests over the police killing of George Floyd. Those protests – the peaceful ones, anyway – were a good thing.

In consequence we have seen a sharpening of sensitivities to films and TV shows with racial content that, by any fair measure, borders on paranoia. This is not a good thing.

Already gone from the BBC’s iPlayer platform and from Australian streaming service Stan are Little Britain and Come Fly With Me (both created by Matt Lucas and David Walliams). The Beeb will still stream The Mighty Boosh, though Netflix has decided to nix that show. The issue was actors donning make-up to portray characters of races other than their own.

Netflix has also taken down shows by popular Australian comedian Chris Lilley such as Summer Heights High, Jonah from Tonga, We Can Be Heroes and Angry Boys. Lilley’s portrayal of Asian, Tongan and African American characters have been deemed unsuitable for general viewing.

Stan has dumped Tropic Thunder because it features a method actor (played by Robert Downey Jr) who dons blackface for the entire film. 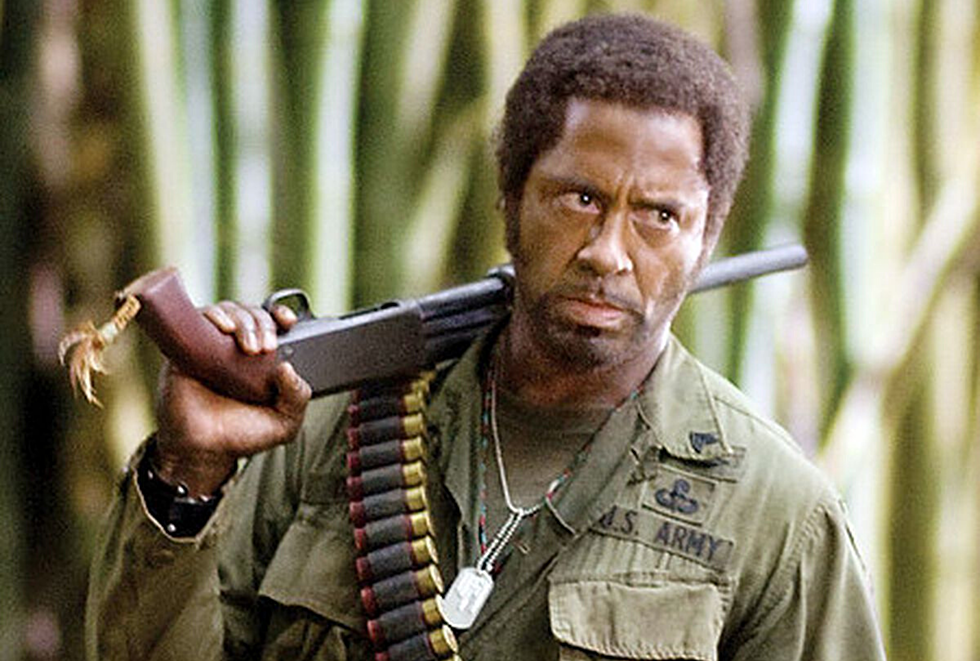 Method acting: Robert Downey Jr came close to getting an Oscar for his performance in ‘Tropic Thunder’. Now it’s on the Must Not See list.

Earlier this week came the alarming news that the classic 1939 film Gone with the Wind – still the most popular film in history – had been pulled, temporarily at least, by HBO Max over its outdated cultural depictions of African American slaves. Especially offensive was Hattie McDaniel’s performance as Mammy. Never mind that the Oscar she earned for it was a breakthrough moment, the first ever won by an African American.

And, after 32 years of showing the public the gritty underside of life in the American police force, the plug was pulled on Cops by Paramount. The charge against that show in the wake of the George Floyd killing was that it somehow glorified police aggression.

As myopic as these impulsive reactions are there’s a glimmer of hope that the world might pull back – for a blessed moment, at least – from the brink of a politically correct abyss.

And where does it end? The answer to that is simple. It won’t. Once you decide that people are incapable of understanding irony or satire or parody or context then there will simply be no end to what can be banned.

There was outrage when word came through that a 45-year old episode of Fawlty Towers called The Germans – the one that coined the popular phrase “Don’t mention the war” – had been pulled by the BBC from its UKTV streaming platform.

Watch your mouth: This is one of the offending scenes from the ‘Fawlty Towers’ episode titled ‘The Germans’. Warning: contains the N-word.

There was widespread uproar from fans that this was the last straw in this wave of pop cultural cleansing, that the PC Police had gone too far. In response to the episode’s scratching John Cleese made the obvious point that the show was clearly mocking racism, not endorsing it.

Why does Cleese even need to say that? How could any sensible person not get that?

Here’s the thing: people aren’t stupid. They understand how comedy works, they recognize irony when they see it. And they know the critical importance of context.

In the offending episode Fawlty is suffering from a blow to the head, the Major is senile. The show doesn’t promote racism, it shows racism as the product of defective minds.

For crying out loud. It’s 2020. Does the context of a joke really need to be explained and articulated? Or is Basil Fawlty right when he says “You have absolutely no sense of humour, do you?” In the show he’s speaking to the Germans, now he seems to be speaking to media executives and their woke overlords.

Sensibly, the episode has been reinstated, though it will now carry a caution at the beginning that warns the show contains “potentially offensive content and language”.

The idea that “questionable” content should carry a front-end caution is a sound one. We have them for strong language, violence, drug use, sex scenes and nudity, so it’s no biggie to also include one that warns about “racial content”. HBO promises Gone With the Wind shall return shortly, but with notes about it’s outdated attitudes and portrayals.

A clear distinction between racist content and racial content is sorely missing from this flurry of wholesale pop-cultural shuttering, and is resulting in cases of severe misdiagnosis.

A case in point happened late last year with the de-platforming of Till Death Us Do Part as the BBC-ITV streaming service Britbox deemed the show inappropriate for modern audiences. The classic early 1970s British sitcom featured bigot Alf Garnett (Warren Mitchell) mouthing off very unsavory views about people, politics and race.

But it wasn’t offensive, it was satire. The show was making fun of people like Alf Garnett, not celebrating them. All you need to do is watch the show and it’s as obvious as a frog in a bowl of corn flakes. Same goes with hit Americanized version All in the Family featuring its own bigot, Archie Bunker (Carroll O’Connor).

Yet right now you might as well argue that Schindler’s List is “problematic”. It does, after all, show the efficiency and might of Nazi power – shooting Jewish prisoners from a balcony, no less. How can that not be offensive? Amon Goth (Ralph Fiennes) was, after all, a diehard Jew-hater who loved his job. So, too, Hans Landa (Christophe Waltz) in Quentin Tarantino’s Inglourious Basterds. So into the furnace they go.

As for Quentin Tarantino, he must be bracing for trouble, for under this regime how could anyone dare defend his films as anything but “problematic”, “inappropriate”, “offensive” or whatever other woke-approved term has cache at the moment?

N-bomb shower: This 18-minute clip tallies all the N-bombs dropped throughout Quentin Tarantino’s films. How can they possibly survive the prevailing madness?

Reservoir Dogs must be up for the chop. So too, Pulp Fiction, Jackie Brown, The Hateful Eight and especially Django Unchained.

Never mind that Django is one of the fiercest anti-racism films made in decades, or that Tarantino has done more than most living American directors to confront racism in America and to speak out against police violence.

Like most Tarantino films, the N-word is all over it, it features a stack of racist characters – including a main character Calvin Candie (Leonardo DiCaprio) – and even has a servant (played by Samuel L. Jackson) who is proud of his favoured slave status. So into the furnace it goes, along with everything else.

These are but a few of the thousands of examples that can illustrate just how stupid these censorious moves are.

And here’s a lovely old chestnut to consider.

The Black Lives Matter protests that sparked all this will hopefully do some good, especially in Australia for the indigenous people who still live in horrific Third World conditions.

But banning films and TV shows in its name or at its behest won’t change a thing.

What will change things is policy and official action to improve life, and you can’t get there by tagging shows as “inappropriate” and “problematic” because “times have changed”. Pop culture is great at reflecting society, not so great at affecting society.

Bad Boys: Jonah (Chris Lilley) and his crew sing their anti-bullying song – but for how much longer?

And it’s the thin end of the wedge. Once you subscribe to the principle of censoring pop culture along PC lines – determined by whom, by the way? – then the list of films and TV shows that must be removed from viewing platforms simply grows and grows.

And where does it end? The answer to that is simple. It won’t.

Once you decide that people are incapable of understanding irony or satire or parody or context then there will simply be no end to what can be banned.

This censoring is ultimately pointless and we all know why. As we saw with Prohibition, banning something popular achieves the precise opposite of what is intended. There’s nothing more attractive than forbidden fruit and, sure enough, once word got out that HBO Max was pulling Gone With the Wind guess what happened? Yup, it shot to #1 on Amazon and #5 on iTunes the very next day.

And now that Little Britain and Chris Lilley’s oeuvre have been stung by the wasp of woke righteousness they carry that same allure, especially for those who spot the DVDs for sale for $3 at Cash Converters.

But you know what? The big test that will determine just how effective or lunatic these PC measures are will be the haste with which Google strips all offending content from YouTube – where, by the way, you can see clips from all the banned shows for free, and often in full.

As for the stacks of archival Nazi propaganda, they’ll have to get rid of all that as well. Why? Because, according to present dictates, normal people who see it won’t understand that it’s not an instructional video.

Then again, perhaps it should carry a caution: “Warning: What you about to see is Nazi propaganda. Don’t do what it says. Please.”

We live in strange times, indeed. And all that’s needed to make things better is some respect for the average person’s intelligence, common sense and ability to get a joke.