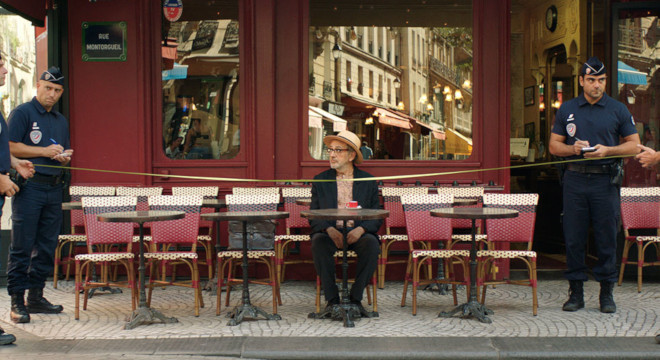 Measuring up: Palestinian writer/director Elia Suleiman plays a passive observer of life in ‘It Must Be Heaven’.

IT MUST BE HEAVEN *** (102 minutes) M
If anyone finds anything deep and meaningful behind Elia Suleiman’s featherweight visual comedy they’re probably missing the point.

Heavily influenced by the style of legendary French filmmaker Jacques Tati, who in turn took his comic cue from Charlie Chaplin, Suleiman casts himself as himself as a man quietly keen to leave Palestine and see the world, hoping that the dream of a stand alone homeland will come true.

He visits Paris, then New York where, after remaining virtually silent the whole film, Suleiman utters a few words in his role as a visiting Palestinian filmmaker.

Adopting a gentle, family-friendly mode, much of the film is made up of gently humourous, often witty visual skits as people move through very carefully composed frames that often appear symmetrical.

The pacing and editing is very mannered, even sedate, relying on the relative silence and Suleiman’s role as passive observer to sell each gag.

It all works very well, his encounter with a sparrow being the film’s highlight.

Beneath the film’s apparent randomness runs the gossamer of a story regarding Suleiman’s dream. He consults a dodgy looking tarot card reader about Palestine’s future and attempts to find backing for a film about Palestine, which he is told lacks sufficient Palestinian character.

These moments thread neatly and ever-so-subtly with scenes involving police chases, military hardware and an early monologue where a neighbour relates a fable about befriending a snake. All in all they don’t really add up to much, but what they do add up to is a modest plea for a homeland and for people to get along.

That is as close as the film gets to being political. Thankfully, Suleiman keeps his focus where it should be, which is on the funny as he meekly observes the little ironies, absurdities and bewildering acts of human nature that surround him wherever he is.

If the film is intended to impart a message of peace, Suleiman has chosen the best style by which to deploy it. As we saw with The Assistant, sometimes the most effective way to make a point is to whisper rather than shout.

It Must Be Heaven opens in cinemas on Thursday 2 July. (Nova, Lido & Classic in Melbourne.)