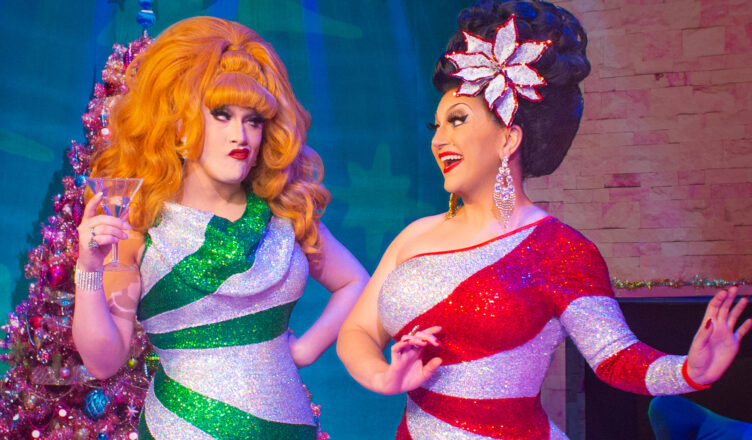 Mayhem with meaning: Two drag sisters wrestle with the true meaning of Christmas in ‘The Jinkx & DeLa Holiday Special’.

THE JINKX & DELA HOLIDAY SPECIAL **** (67 minutes)
If there’s one thing everybody can agree upon when it comes to Christmas it’s that nobody can agree on whether Christmas is a worthwhile celebration of Christian love and charity or a commercially driven endurance test of forced jollity, muted family resentments and wholesale disappointment.

Stuck in a Seattle sound stage with Jinkx because of CV-19, the ever-sprightly DeLa intends to defy the gloom that has fallen upon the season by mounting a gloriously cheerful old-style Christmas TV special celebrating all the grand traditions she grew up with.

Jinkx, however, isn’t quite on board. Drenched in bad memories of Christmas that she tries drowning with martinis, she runs interference against DeLa’s plans, rubbing salt into DeLa’s good intentions by decrying the hypocrisy and artificial goodwill of the festive season.

What starts out as a fun cartoonish lampooning of Christmas quickly escalates into an extremely funny, wit-laden, full-blown satire as the pair perform a biting meta-musical, toying with the show’s script as they go.

Tremendously energetic, the special is spiced by a host of fabulous, often uproarious musical numbers with hilarious lyrics, accompanied by some nifty dance choreography, including a few spots of tap dancing.

These include the catchy Santa Fa-La-La, the mournful No One Played Santa For Me, the elegiac A Gay in a Stranger, dancefloor ditty The Nativity Twist (a highlight) and the anthemic Passive Aggressive Christmas (another highlight).

Destined to become a Christmas classic, though, is the beautifully titled, universally relatable Everyone is Traumatized by Christmas. Here’s to its future as a holiday standard.

Though the special is strictly an adults-only affair, director DeLa, who co-wrote the piece with Jinkx, wisely doesn’t push the material to breaking point.

Yes, the show is front-loaded with loads of low-brow sexual innuendo, features a naked guy and delivers some explicit lyrics, yet the whole shebang manages to stay on the right side of risqué. It’s naughty without ever actually becoming dirty.

There are inevitable touches of sleaze – how could there not be? – but, in the immortal words of the great Kenny Everett, it’s done in the best possible taste. (Well, if not taste then tact, at least.)

Religion is a major target here, though when it comes to chain-sawing through sacred cows, DeLa & Jinkx indulge in a pleasing exercise of how to have your cake and eat it, too.

Flourishes of irreverence abound, the most outrageous example being the song set to the tune of Baby, It’s Cold Outside where God’s impregnation of the Virgin Mary is detailed. That’s sacrilege, surely.

Yet one craftily etched moment in the show clearly delivers a friendly wink to Jesus people. It’s as if the show is saying, in the spirit of Monty Python’s Life of Brian, that what’s being spoofed and ridiculed here should not be mistaken for an attack on faith.

(Is this reading too much into a garish Christmas show by two drag queens? Possibly. But it’s Christmas time. Thus, if so, please forgive.)

Especially pleasing in The Jinkx & DeLa Holiday Special is how, amidst all the high-key shenanigans, over-the-top costumes and general mayhem, we see the characters undergo real change.

It’s frivolity with purpose, for underpinning the comedy is a questioning of tradition that highlights the difference between rituals that are meaningful and those that are designed to serve what Jinkx refers to as the “Santa industrial complex”.

Graced with some impressive camerawork and long single takes, the show’s production values are well above average, including some sweet editing that imbue DeLa and Jinkx with the miraculous ability to undergo instantaneous costume changes.

As funny and as cheeky as it is, the show clearly isn’t just some throwaway romp that was written on the back of an envelope during a train delay.

Hardcore fans of musical theatre will appreciate how solidly built this deceptively flippant piece of work actually is.

BenDeLaCreme, Jinkx Monsoon and their key collaborators – including Keith Harrison and Major Scales – engage the best conventions of musical theatre. The show’s content might question tradition, but the form clearly respects it.

Indeed, the show is so on-point in terms of narrative structure and songs that propel story it makes one pause to seriously consider that if Gilbert & Sullivan were alive and were commissioned to produce a raucous, bitter-sweet Christmas TV Special for two drag queens, it would probably have come out something like this.

To check out The Jinkx & DeLa Holiday Special visit https://www.jinkxanddela.com where you can see the show, get the soundtrack and purchase some not-so-tacky merchandise.