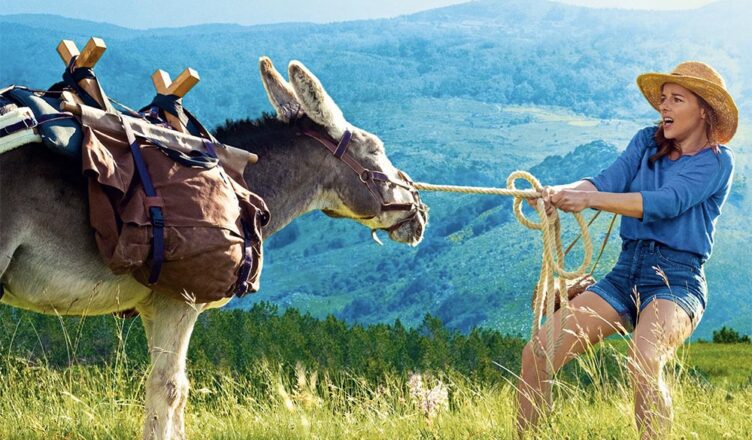 ANTOINETTE DANS LES CEVENNES *** (96 minutes; subtitled) M
While the notion of having strong female leads in films remains a noble one that we all should support (provided the films are good, of course), the cream-puff comedy Antoinette dans les Cevennes demonstrates that there is still space for films with silly female leads.

Lead actress Laure Calamy won a César Award for her lead performance here as the titular Antoinette, a singularly daffy woman who does not appear to have the emotional intelligence of the primary school pupils she teaches.

She’s having an affair with married man Vladimir (Benjamin Lavernhe), whose daughter she teaches. Infatuated beyond reason by her romantic circumstance, she becomes upset when Vladimir tells her his wife Eléonore (Olivia Côte) has planned a vacation, thus ruining their plans for a furtive getaway.

To console herself, she comes up with the hare-brained idea to take herself on a “find-yourself” walking holiday to the Cévennes National Park – the exact same place her beau is off to with his family.

She times her visit so that she won’t encounter Vladimir and his family, but guess what happens?

It’s a funny, souffle-lite lark with plenty of horseplay with a stubborn mule called Patrick and no deep and meaningful message, other than not to mess with a lascivious adulterer.

With a keen eye for the natural beauty of the film’s verdant location, writer/director Caroline Vignal also shows a love for physical comedy and for holding shots to let the funny business play out in real time. She elicits a winsome performance from Calamy who gives the attractive Antoinette an endearing naivety.

Inspired by the seminal 1879 travel book Travels with a Donkey in the Cévennes by Robert Louis Stevenson (which was also motivated by an ill-judged affair), the film’s original title was My Donkey, My Lover & I.

Why ever did they change it?

COLLECTIVE ***1/2 (109 minutes; subtitled) MA
The lethal 2015 fire at the Collectiv nightclub in Bucharest, Romania was bad enough in that it killed scores of people, but what truly horrified the Romanian public was the scandal over government corruption and incompetence following the tragedy.

Doggedly digging into the official mess was a knot of reporters at Gazette, a sports newspaper that lead the local media in its charge against the ineptitude and fraud that had infected the healthcare system in general and the care of the fire victims, some of whom died because the hospitals were ill-equipped and administered by people who didn’t care.

A very fine example of as-it-happens documentary-making, director/cinematographer Alexander Nanau is there as the journalists peel back the putrid layers of mismanagement, including a thankfully brief shot of an open would crawling with maggots.

While the film’s commentary about the decrepit state of Romanian politics is up-front and very loud, the final stretch of the film where brave reforms are to be tested at a general election offers a more subtle and unsettling observation about online comment culture. With hopes raised high that things might improve, Collective illustrates the stark discrepancy that can exist between how things appear in cyberspace, and reality.

Quite understandably, the film is up for Best Documentary and Best International Feature, marking the first time a Romanian film has been Oscar-nominated for anything.

Footnote: A quick scan of Romania’s battle with COVID-19 suggests the country’s healthcare is struggling to improve. It ranks 24 out of 221 countries, with more than 25,000 deaths thus far and suffering between 1-200 deaths per day. (Australia’s rank is 116.)

VOYAGERS * (108 minutes) MA
Lord of the Flies in Space. Why not? It’s a perfectly good premise for a sci-fi safari. Only the trouble with writer/director Neil Burger’s ultra-lame, ultra-predictable dirge is that the film does absolutely nothing with the idea. Well, nothing interesting.

The set-up involves a spaceship sent from Earth to colonize a newly discovered habitable planet. It’s going to take more than 80 years to get there, though, so it’s one of those multi-generational deals we saw in Passengers, where the mission will completed by the grandchildren of those who set out.

The ship starts out with a bunch of children with a single adult to guide them (Colin Farrell). That works out about as well as you’d expect and the teenagers must work out the best way to survive.

Regrettably, everything unfolds with such predictability and lack of imagination you might have to get up from your seat and do a bit of cardio to keep the blood flowing. That’s how boring the film gets.

Although Burger has made some notable films (Divergent; The Illusionist; LimitlessBillions) his direction here is flat as heck, lacking any tension and, in some scenes, flailing all over the shop. Consequently some “key” moments drew peels of derisive laughter from the preview crowd.

There are story holes everywhere, illustrating yet again how the art of the Hollywood screenplay is in deep trouble, at least where major films are concerned.

There’s nothing much to praise in the lead performances either; Tye Sheridan (Ready Player One), Lily-Rose Depp (Johnny’s daughter) and Fionn Whitehead (so good in Dunkirk) put in cardboard turns, though that’s most likely because of the undemanding narrative and wet scenarios.

And does this film contain the most unimaginative spaceship design in the history of sci-fi? The interior of the vessel looks as though it was based on a college dorm. The film is basically two hours of teenagers running down narrow corridors. The only thing missing is a bong and a Jimi Hendrix poster.

WILLY’S WONDERLAND * (89 minutes) MA
What an interesting concept for a film: a horror-comedy that is neither scary nor funny.

Nicolas Cage plays a guy who is asked to clean up a derelict children’s entertainment facility in exchange for repairs to his car, which has burst its tyres in a remote town in that special part of inland America reserved for these types of scenarios.

The place turns out to be populated by animatronic critters possessed by the dark souls of of mass murders who suicided in the place years ago.

Cage, who says not a word throughout the film, engages in bloody fights with these creatures while cleaning the place and guzzling energy drinks. A group of trouble-making local teens also get involved, and their fate is in strict compliance with that of most teenagers in horror films.

As a Friday night streaming time killer Willy’s Wonderland might play better, especially if viewed from the corner of the eye whilst playing Monopoly or searching for YouTube clips of Nicolas Cage in good movies.

But the idea of paying a cinema admission to see this junk? Forget it. It’s reminiscent of those cheapie horror films that used to play as the second feature on double bills at the drive-in.

And, by the way, if you were still watching the screen at that point in the evening, the date was declared a failure.