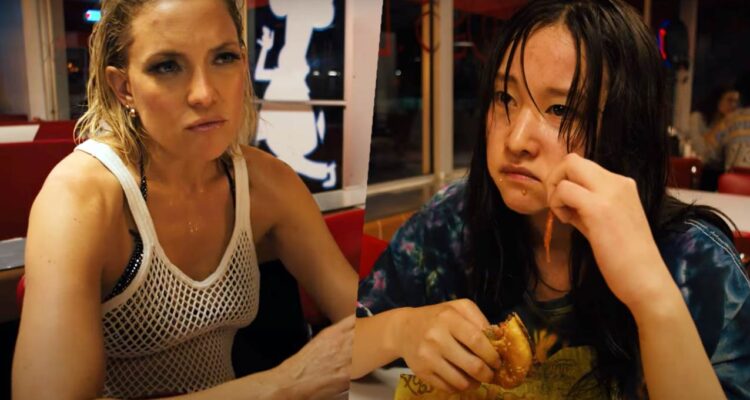 A meeting of minds: Kate Hudson and Jun Jong-seo in ‘Mona Lisa and the Blood Moon’

MONA LISA AND THE BLOOD MOON ***1/2 (107 minutes) MA
A wildly stylish, cheeky ride through the underside of New Orleans, Mona Lisa and the Blood Moon tracks Mona Lisa Lew (Jun Jong-seo), a taciturn young lass who takes unauthorized leave from a mental institution on the night of a foreboding full moon.

Possessed with Jedi-like mind control powers, she acquires suitable attire before running into Bonnie (Kate Hudson) a streetwise club dancer and hustler who takes her in.

Initially acting out of gratitude, Bonnie figures out ways to use her new friend to get easy cash from people at ATMs, a scam that angers Bonnie’s son (Evan Whitten) who has become attached to Mona Lisa. Also, there’s a determined, injured cop in pursuit (Craig Robinson, aka Darryl from The Office) aiming to nab Mona Lisa before she skips town.

A TASTE OF HUNGER *** (104 minutes; subtitled) M
A toxic mixture of workplace pressure and infidelity come to the boil in the biting Danish drama A Taste of Hunger, in which the relationship between a well-to-do Copenhagen couple is pushed to the brink during an important night for their high-end restaurant.

For years Carsten (Nikolaj Coster-Waldau from Game of Thrones) and Maggie (Katrine Greis-Rosenthal) have combined their passion for food with their passion for each other, building a top-tier eatery that is on the verge of getting a Michelin star.

As luck would have it, the very night a reviewer is suspected to be there a mishap in the kitchen results in sub-standard food going out.

In a normal restaurant, or on a normal night, such a stumble would result in an apology and the offer of a free dessert, but here it’s an unqualified disaster.

Worse, the suspected reviewer has already left so the chase is on to locate him, apologise for the stuff up and invite him back, pleading for a second chance.

Peppering the night’s catastrophe are flashbacks recounting their relationship, their business and the presence of Frederik (Charlie Gustafsson), a fellow chef who Maggie liked a little too much.

While indulging the foodie appeal of the setting with loads of soft lighting and lovingly shot close-ups of artistically prepared dishes, director Christoffer Boe effectively teases out the tensions that infect a relationship once the suspicion of infidelity sets in.

It’s always a tough line to stride, whether to consider cheating as irreparable damage to a relationship or if an emotional bypass is possible, especially when motivated by the desire to hold a family together. A Taste of Hunger offers a mature look into the fissures of a personal and professional partnership as it faces imminent failure on all fronts.

PROJECT WOLF HUNTING *** (121 minutes, subtitled) R
Devotees of old-school, over-the-top slasher films will have no cause to complain with Project Wolf Hunting, a blood-gushing splatter extravaganza from South Korean about a cargo ship loaded with dangerous criminals who are being shipped from the Philippines back to the peninsula.

They’re being guarded by a squad of lightly armed cops but – wouldn’t you know it? – the blighters break free and unleash all manner of ultra-violence, thanks to some collaborators who have also supplied lots of automatic weaponry.

There’s so much shooting, stabbing, dismemberment and geysers of blood spurting from slashed throats and severed veins that after about an hour you wonder what’s next.

Then a genetically engineered monster clocks on to keep the bloodshed going and flowing. It’s all a bit much, but in a fun way. Fans of Takashi Miike will appreciate director Kim Hong-seon’s love for practical effects, especially when it comes to tearing flesh and crushing skulls. How heartening it is to see such devotion to tradition.

THE NIGHT OF THE 12TH ** (114 minutes; subtitled) M
A fairly standard police procedural, The Night of the 12th follows the rather half-hearted investigation into the murder of a young woman, who is set alight late one night while walking home from a party in the high-altitude town of Grenoble. With a string of leads leading to a lot of suspects but no arrests, interest in pursuing the culprits wanes. Detective Yohan Vivès (Bastien Bouillon) persists nonetheless, holding onto the case years after his colleagues have lost interest. Regrettably, the direction by Dominik Moll can’t sustain much tension in this so-so French-Belgian crime drama.