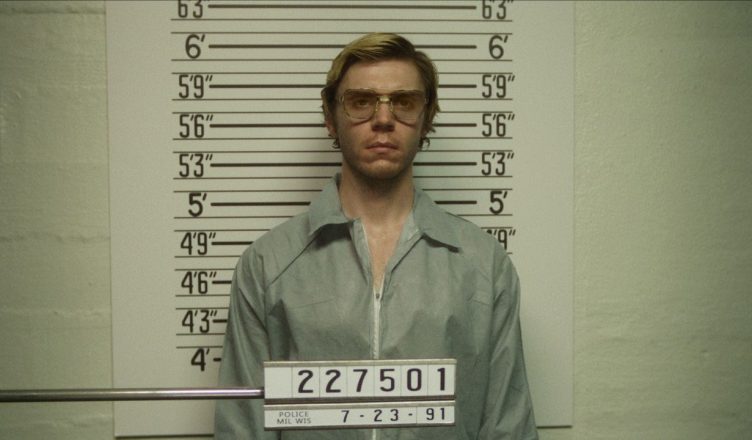 For all the horrors depicted in Dahmer, a meticulously researched, riveting dramatization of Jeffrey Dahmer’s life and crimes – claiming the lives of 17 young men in Milwaukee, Wisconsin between 1978 and 1991 – perhaps the most confounding and frightening human behaviour comes not from Dahmer, but from his dad.

Whatever Geoffrey Dahmer (Evan Peters) does, however stupid or shocking, his father (Richard Jenkins) is always there offering the unqualified forgiveness that only comes with unconditional love.

Whether Dahmer is dropping out of college, drinking so much he gets kicked out of the army, failing to hold on to a simple job, or arrested for murdering and chopping up people in his apartment, his father is always there trying to help. Love for a child is total and brooks no compromise with morality or conscience, it seems.

A truly macabre aspect of the father-son bond, it is but one piece in the complex, sometimes subtle portrayal of Dahmer’s tortured life and twisted mind.

The compelling series covers Dahmer and the world in which he moved in great detail and from multiple perspectives, with special emphasis on Dahmer’s victims and their loved ones.

The episode depicting his relationship with deaf man Tony Hughes (Rodney Burford) is partially told from his perspective, with little or no audio. It’s one of many powerful stylistic touches.

Stretching back to his upbringing we see his fascination with anatomy and dissection, his idealization of the male physique – he steals a mannequin from a fashion store – and his over-powering need to possess men he finds attractive, even if it means drugging and killing them.

A big part of the telling is how lousy a job the police did when dealing with Dahmer. Whether it’s letting him off at a traffic stop with a dismembered body in the back seat or failing to respond to cries of concern from his neighbour Glenda Cleveland (Niecy Nash) the conduct of the cops is seen as a contributing factor to the longevity of Dahmer’s killing.

In one remarkable scene a recording of an actual phone call is played. A victim who has escaped from Dahmer’s clutches is caught by the police and returned to his apartment. She’s worried about his age, that he looks like a child. There’s nothing to worry about, she is told dismissively, even though Dahmer has a history of child molestation.

No more chilling indictment could be proffered for the casual, racist attitude of the local police, their indolence allowing Dahmer to prey for as long as he did on the young gay men of colour at the gay clubs he frequented, often with drugs to help subdue them.

As Dahmer, Evan Peters is unnervingly subdued, his menace greatly amplified by his mild-manner; the portrayal of Dahmer’s ever-forgiving father by Richard Jenkins is extraordinary, at once convincing and bizarre (both actors served as producers).

But the real stand out is Niecy Nash as Dahmer’s long-suffering neighbour Glenda Cleveland (an amalgam of several neighbours; she actually lived across the street.)

Not wanting to be a bother, she finds herself having to continually complain to the landlord and to Dahmer about the fetid stench emanating from his cramped apartment, wafting into hers through the vent. Plus, there’s lots of screaming.

Totally unrecognizable here from the ditzy cop Nash played in the comedy series Reno 911, she deserves some sort of award for her fabulous work, most notable in the memorable, darkly humourous scene in which Dahmer, keen to make piece with Glenda, offers her a meat sandwich.

It’s brave that the show dials down on the gore and graphic detail – though there is enough of that – and dares to humanize Dahmer by scrutinizing his backstory including his many career failures, his homosexuality and his compulsion to “consume” men he liked and wanted to “get close” to.

Wisely, the series never veers from the overriding portrayal of Dahmer as a depraved embodiment of evil, an extreme sexual deviant who relished the new level of notoriety he attained in prison with the influx of fan mail, requests for signatures and comics celebrating his gruesome crimes.

Unsurprisingly, the series has stirred a bit of controversy.

While setting viewership records for Netflix, the show has come under a limited amount of loud criticism for being exploitative, for glorifying the crimes and being sympathetic to a heinous mass murderer.

None of this holds up after viewing the entire series.

In humanizing Dahmer through drama, the show seeks to offer some understanding of his character, not to excuse or empathize with it. There are no appeals for sympathy among the many insights baked into the narrative. We saw the same thing in the film Downfall about Adolf Hitler.

Indeed, the process of humanizing evil people through film and TV accentuates their evil, making them even more frightening and detestable by the uncomfortable truth that they are merely people. Only the truly perverted and sick would come away from Dahmer with a diminished sense of what a cretinous horror he was.

Testament to the depth of research that went into the show is the three-part Netflix documentary series Conversations with a Killer: The Jeffrey Dahmer Tapes. Composed of lengthy confessional Q&As with Dahmer and interviews with those close to the events – police; survivors; obvservers – much of it outlines incidents accurately dramatized in Dahmer. It makes for a very informative companion piece, as it was clearly designed to be.

In a resoundingly pointless move, Netflix succumbed to pressure and removed the “LGBTQ” tag from its description of the show after two days. Why? Dahmer was a gay man who preyed on gay men; the show highlights how police inaction when dealing with the case was partly due to anti-gay prejudice that, in turn, probably extended Dahmer’s killing spree.

It’s not a pretty story but gestures to deny it serve no purpose. It is an important chapter in the LGBTQ story, especially regarding the fight for equal rights and against embedded homophobia. Dropping the tag from the show achieved nothing.